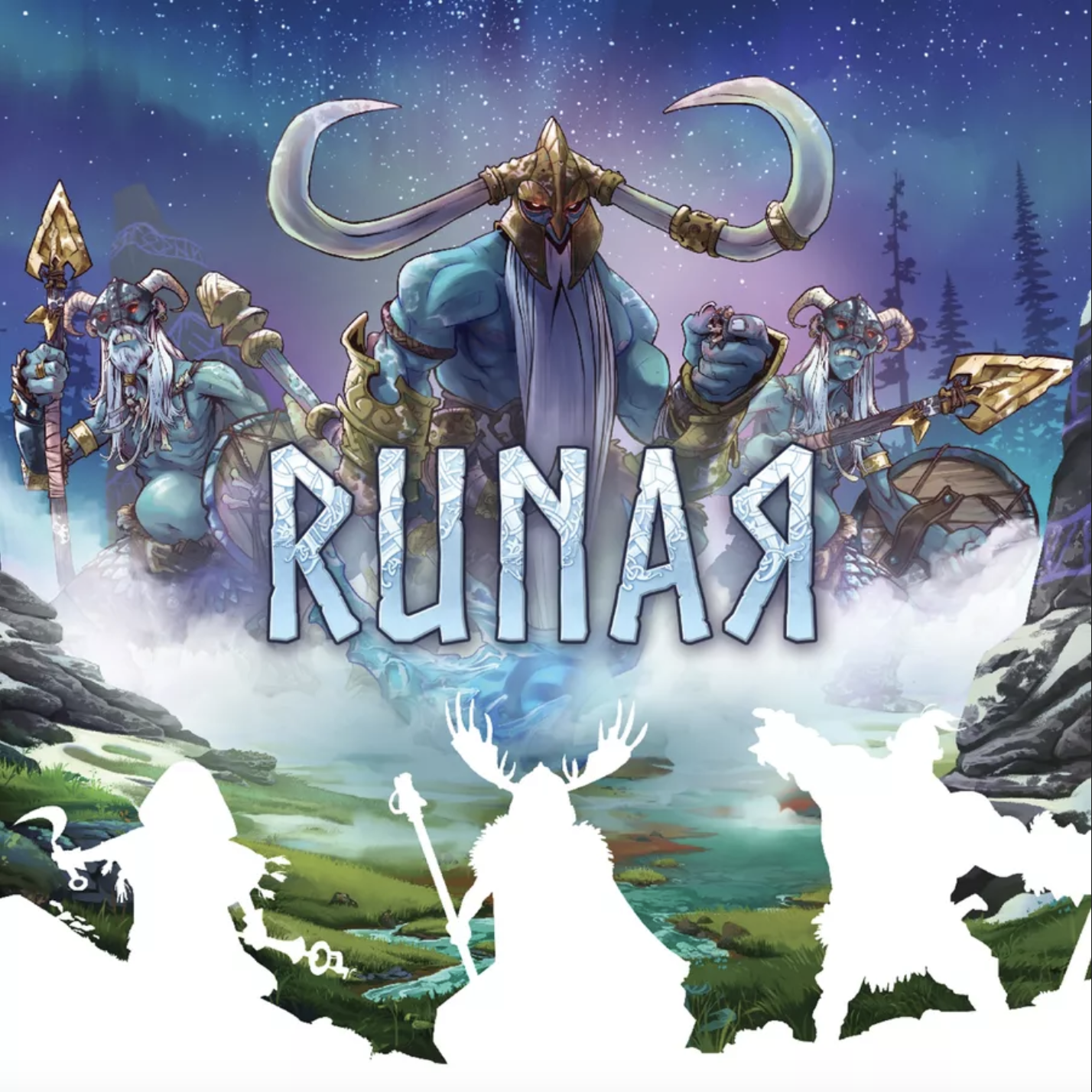 Summary: “You embody an ambitious merchant in the medieval Hanseatic League and fight for your place at the top of the trade alliance. Through lucrative trading with other Hanseatic cities, you increase your wealth and gain more and more influence in the entire region of the North and Baltic Sea. Meanwhile, you contribute to the development of the flourishing city of Luebeck by commissioning useful buildings. Try to secure important privileges during the Hanseatic Convention in the Council Hall before your opponents take them away from you. Use your limited action points wisely to trade goods and gain wealth. But money alone will not be enough to win this strategic Euro-Game. Rather you must secure as many victory points in the form of council votes as possible through influence majorities on the sea map, your reputation in the city of Luebeck and through various privileges and luxury goods to become Aelderman and win the game.”

Summary: “Built around a solid historical context highlighting the pilots of the time, men and women with incredible destinies, as well as the most famous civilian airplanes of the 20s and 30s, some of which are still flying today, nearly a century after having written the most beautiful pages of aviation history in the sky. A game that deals with the peaceful, technological and heroic aspects of the world of aeronautics, and allows you to relive an epic that has become mythical: the fabulous flight of air transport. The goal of the game is to become a legendary pilot by accumulating the most Glory Points. Glory Points are earned during the game by flying to a Stage City, completing an Objective, and achieving a world-first flight. In addition, at the end of the game players also earn Glory Points based on the technological level of their aircraft and the amount of money they have. On their turn a player must perform one of the following three actions: take an objective card and collect income; improve aircraft or change it; or load your aircraft, refuel, fly, and deliver passengers or goods. During a flight, roll the dice corresponding to the colors of the course. The length of the route, fuel used, endurance of the pilot, and reliability of the engine will allow you to cover the distances or not.”

Summary: “Pick from 4 asymmetric factions and draft to summon new yokai making the most efficient night parade. Every round, activate one of your parades to send meeples to haunt the islands, move around and fight each other. As soon as an island have a certain number of yokai, the denizens will build a shrine to pacify them, sending your meeples back to your player area. Once one player get 5 of their shrines in play, the remaining players get a last turn, then the game ends and victory points are scored based on hidden cards to decide the winner.

The Cursed Throne Expansion brings: a new type of action – Reign: that changes effect based on which clan sits on the Cursed Throne; Spirit as wooden tokens, the Champions, the Challenge board, and more yokai to join your parades.”

Summary: “Take turns being good rangers, nasty poachers or curious tourists, each of whom has different reasons for being in the jungle. The Poacher will hunt the doucs, putting them in danger. Which in turn puts pressure on the Ranger. The Ranger will risk it all to save Doucs. Each unsaved Douc is considered lost, and will have a negative effect on end-game scoring. The Tourists will choose how they approach the Doucs. Whether they save the Doucs or put them in danger lies in their hands. The player with the fewest lost Doucs after the game wins. Before starting each game the players must decide how difficult to make their game, as determined by the 3 danger levels. Players may choose a single danger level, or they may mix and match danger levels in each month of their game. Each danger level adds new mechanisms and strategic depth to the game. Douc in Danger supports projects for the conservation of red-shanked Doucs. It’s a new kind of species protection.”

Designer: Stephanie Kwok (Ducks in Tow, Get Off My Land!)

Summary: “In Ducks in Tow, you are walking around the park feeding the ducks their favorite food. When you feed them, they start following you and you must lead them to their favorite location in the park. When you successfully lead them to their favorite location, you take a photo with them and they waddle off to find their friends. Maybe you’ll see them again later as you continue your walk around the park. You will be completing Location Cards that will gain you points at the end of the game. Once you have completed a few Location Cards, you might be able to claim a Formation Card, which will give you additional points at the end of the game.

The Bugs & Slugs Expansion adds player boards, duck cards and bug tokens. There will be bug tokens on the board that you can collect and feed them to your ducks. The player boards and duck cards have token slots on them. Once the token slots are all filled, they grant you special abilities that can be used on your turn.”

Summary: “Players compete to keep calamity at bay. Empire’s End marries the intuitive and elegant mechanism of reverse-bidding with engine-building, long-term planning, and strategic depth. The result is a game with a quick tempo, abundant tension, and multiple challenging paths to victory. Players begin with a civilization at the height of its power. Play proceeds through a series of phases, varying as you progress through the game. During the Disaster phase, players face a common threat such as famine, a flood, or barbarians. The player who ends the bidding must take the disaster, which devastates one of their territories. With each disaster that befalls an empire, its people grow in wisdom and resilience. In the style of the modern classic game No Thanks, resources bid by all players will end up in the hands of the player who ultimately takes the disaster card. That player also gains a new ability, an innovation that reflects their empire’s ability to adapt in the face of challenging times. Each turn, players move along a progress track that dictates whether they will face a disaster or another type of phase. Players can gain new resources during Production phases, rebuild lost territories during Industry phases, and challenge one another during Military phases. At the end of the progress track, the game is concluded and the winner is the civilization with the greatest number of victory points. Intact territories contribute points, but innovations and military successes can provide alternative ways to win.”

Summary: “Prove that you are a better gin crafter than other craftsmen by procuring dozens of uniquely flavored botanicals for gin, coming up with recipes and branding ideas, and skillfully combining various actions.”

Project: One Earth (on Gamefound)

Summary: “Of the billions of planets in existence, none are as perfect or as beautiful as our home planet we call Earth. But Earth is in danger. Human advancements are threatening her ability to sustain life. How can we balance between our need for advancement and our planet’s ability to sustain our ambitions? Play as one of Earth’s mighty nations, competing with one another to ensure your citizens prosper and maintain the highest living standards. However, in doing so, you must also ensure you work together to ensure the sustainability of Earth and its survival. There is only One Earth, and it is our duty to protect it.”

Project: Re;ACT – The Arts of War

Summary: “A 1 vs 1 grid based dueling game about different artists with super powers based on their art style. Each character comes with a unique pre-built deck of cards, all of which are either Intents, which start off a chain, or Reactions, which can be played in response to any intent or react. This react chain is resolved first in last out, and is at the heart of the gameplay. As you work to damage your opponent or control the board with your character and summons, you’ll also be competing to finish your masterpiece before your opponent, a 3 card spread of your character’s greatest work. Doing so will grant you powers of your art form’s truest expressions, and will be key to victory.”

Summary: “Each player leads a group of three Viking Heroes who must survive the icy northern lands – populated by strange and dangerous creatures – while attempting to recover mythical Runic Gems and precious divine objects. Opposing Heroes will stand in your way as your Vikings try to prove their worth to the Asgardian Gods, hoping to be chosen to fight alongside them in the final battle. A Runar campaign unfolds over five games in which players will face gradually more complex and always different scenarios. Each player will use their Actions Deck, made up of the cards of each of their three Heroes, to activate the Vikings under their control, influence the course of the game, and unleash their powerful Skills and Talents. By taking advantage of the Tactics at their disposal, each player can best deploy their forces and manipulate their Actions Deck to best predict and respond to their opponent’s actions. At the end of each game, the Heroes will evolve and gain upgrades in the form of powerful magical items and divine artifacts. By the time the last game is reached, each player must have prepared their Vikings to the best of their ability to prove that they are leading the most valiant group of Heroes.”

Funding Status: Funded; currently at 167% with 9 days to go.

Summary: “A WW2 stealth action game for 1-4 players. Taking on the role of SAS soldiers in the pivotal weeks following D-Day, players must carry out acts of sabotage deep behind enemy lines. Ambush convoys, assassinate high ranking officers, destroy ammo dumps and much, much more in your four man campaign against the Axis war machine. Take down enemy patrols and sentries with the vast array of tools at your disposal, from rifles, explosives and grenades to vehicles, traps and your trusty fighting knife. Move quickly and quietly to complete your objectives. Kill silently and hide the bodies to avoid detection. Get spotted, make too much noise or take too long to carry out your objective and the enemy will raise the alarm. Your heavily outnumbered team won’t last long in a firefight so when the attack comes, make sure you’re in position to make four men feel like a hundred. Each turn, every SAS operator has 4 action points they can use to move, shoot and carry out tasks. During the stealth phase of the game, enemy movement is dictated by patrol lines, sentry points and an event card which is drawn each turn. Each mission has a stealth meter which slowly fills each time the players arouse suspicion (firing weapons, leaving bodies out in the open, etc.) If the stealth meter completely fills, the players are detected & the alarm will sound, triggering the battle phase. The aim of the game is to carry out the mission objective and escape the area unscathed; the easiest way to do this is to avoid detection for as long as possible.”

Project: Shake That City from AEG