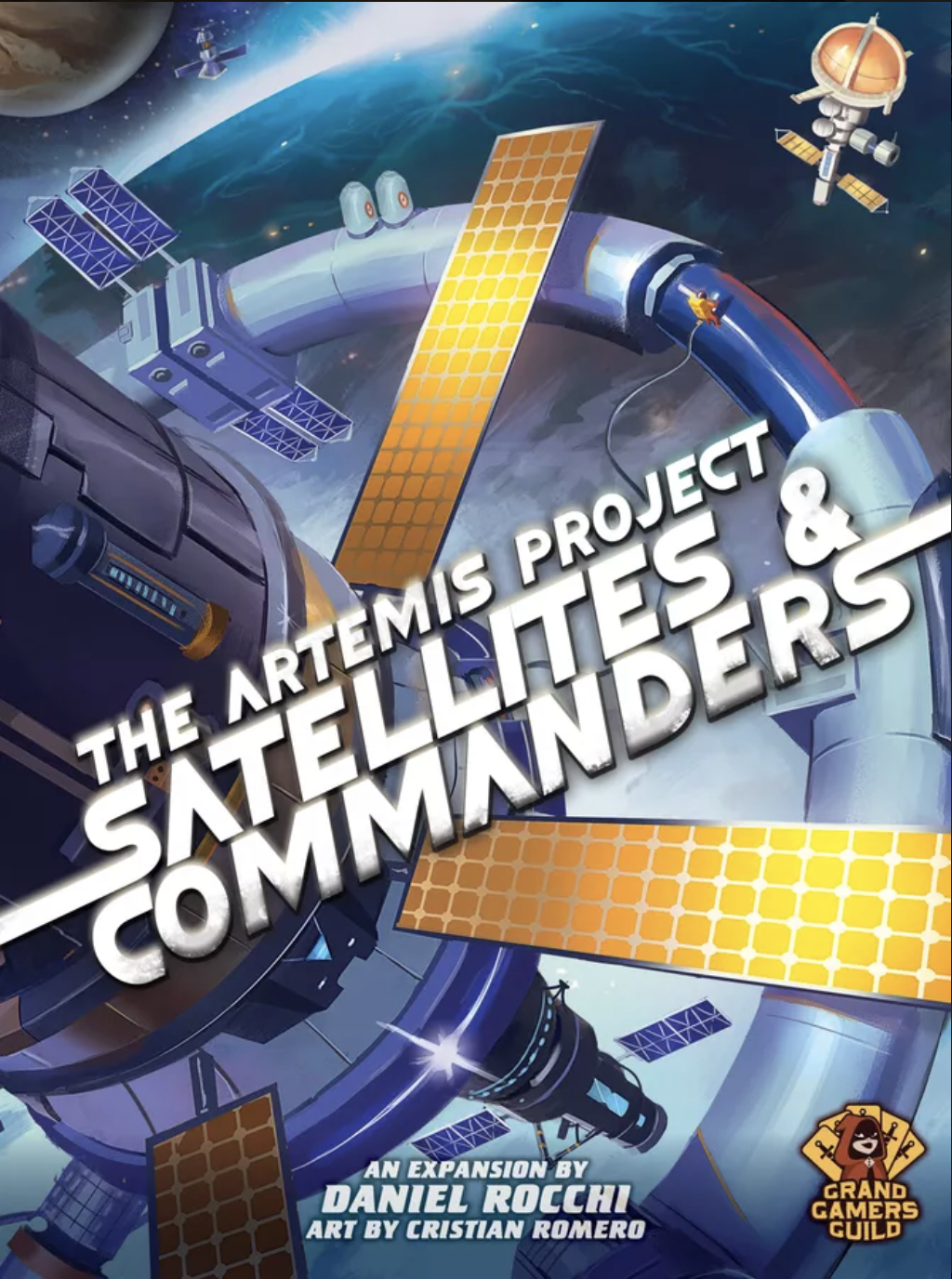 Summary: “The Artemis Project: Satellites & Commanders is an expansion that adds two new major opportunities for strategic play to the base game. Satellites are off-board locations which players can access and influence the action on the moon’s surface below in subtle yet powerful ways. Commanders are a new category of colonist that can act as any colonist type, lend their power to dice you send to various locations, and assist in end game scoring. The Artemis Project is a dice (dis)placement and engine building game that has you fighting the planet as well as the other players. Roll your dice and place them tactically to thwart the other colonists. Harvest energy and minerals. Bid for buildings. Work together to go on Expeditions to earn rewards. Train workers. Will your efforts be enough to survive?”

Summary: “A board game about playing video games. Grab your friends and family and head to the arcade, where you’ll burn through tokens to play games and compete for the best scores. Each game tests different skills, like your joystick agility or button-pressing prowess. Earn tickets, prizes, and power up your skills. Kick butt on games in your favorite genre and win big by beating high scores. Challenge other wannabe heroes to 2-player games, grab a friend for co-op mode, and compete in arcade tournaments. The player with the most prizes when everybody’s out of tokens is the new Joystick Hero.”

Project: Kabuto Sumo Total Mayhem And So Much More!!!

Summary: “In Bites, Players move ants along a trail and collect food as they go. However, the value of that food depends on how the other ants move. Shared incentives mean you are always trying to figure out what the other players are up to. Variable ‘rules cards’ tweak the rules to every game so that each play is fresh. Bites: New Recipes adds exciting game changing possibilities to the core game of Bites. One of the things that made the original game so exciting and replayable were the variable scoring cards. The expansion takes them to an entirely different level. You’ll be able to play with over a dozen new rule cards that have noticeably larger effects than the cards in the base game. In addition to the rule cards, you’ll have new characters and objects to play with.

In Kabuto Sumo, you are one of the contending beetles that is battling for supremacy in the ring and your place in the pantheon of legendary wrestlers. The gameplay of Kabuto Sumo resembles the coin-pusher arcade games in which you strategically drop quarters and anxiously anticipate coins cascading off the platform. This game features a similar experience, with you trying to strategically slide pieces onto the board and push the other players out of the ring. It’s an exciting combination of dexterity, strategy, and luck. Kabuto Sumo: Total Mayhem is an expansion to the base game Kabuto Sumo. This expansion provides all wrestlers with a variety of what pro-wrestlers call ‘foreign objects.’ Each of these objects – think ladders, chairs, coffins – are put into play both in and around the sumo ring to enhance the wild physics of all the different shapes that push each other around. Plus, each object introduces new victory conditions that can expedite the game and add more strategic depth.

On Tour Paris & New York is a brand-new standalone game based on the original On Tour design and featuring some new opportunities for travel. Your goal is to plot the longest and most efficient route through these two magnificent cities where you are musicians in the 1920’s trying to play in as many jazz clubs as possible. Each turn two ten-sided dice are rolled to make two two-digit numbers that determine where you visit (a roll of 3 and 7 creates the numbers 37 and 73). All players write each of those numbers in a state on their map. The regions they can write in are restricted by cards turned up in the middle of the table. New abilities to take riverboats and ferries will help you tour the city and become a jazz legend. At the end of the game, each player draws a route on their map, starting with a low number and visiting adjacent states with higher and higher numbers. Players get a point for every venue they visit.

In Q.E., a term that stands for ‘quantitative easing,’ you play the role of a central bank. You bid on different size companies to accumulate various levels of victory points. The amount you bid is unlimited since you are the central bank and you own the printing press. After the initial ‘open’ bid by the lead player, the other players bid in secret. After the sixteen companies have been ‘bailed out,’ bonus victory points are awarded for company sets of nationalization, monopolization, and diversification. Player markers on the scoring track now reveal which player has the most victory points, but this is not the end. Players must now add up the amount of money they printed and the player who printed the most money loses all their victory points. Q.E. Commodities now presents new investment opportunities for different countries. As an expansion to Q.E., you will now have the ability to diversify your portfolio by investing in gold, oil, and crypto. Another element of the expansion will also allow you to lower your total spend throughout the game, providing extra layers of strategy and unexpected twists.”

Summary: “A two-player customizable tactical card game. You are a Runeslinger, a wielder of magical incantations called runespells. Runespells derive their power from ancient runestones. The runestones lie scattered across the lands. On your search to find new runestones, you find yourself locked in fierce combat with a rival Runeslinger. Sling powerful runespells, wield exotic trinkets and protect yourself with magical enchantments called boons. Battle in an epic encounter to reduce the enemy Runeslinger’s power from five to zero to claim victory. Runeslinger’s power mechanic creates numerous opportunities to win a Runeslinger’s encounter. Deal damage, play control, sear your enemy’s cards, disrupt their resources or manipulate them with up to six unique and powerful ailments. Runeslingers introduces a unique ailment mechanic that allows players to easily apply negative status effects to the enemy Runeslinger. Ailments are easily tracked using the provided ailment cards and game mat. Ailments can be sealed by boons, protecting you from their negative effects.”

Summary: “A competitive team combat arena game featuring a series of scraps between two teams of two customizable fighting robots. Gameplay is card-driven. Each robot has its own unique Control Deck; each round, players simultaneously select a single Control Card for each robot, all of which are revealed simultaneously. Each card has a unique Speed rating, and the cards are resolved in order from highest to lowest. Once a robot has used a card, it is locked into their Command Chain and can’t be used again until the robot powers down for a round, meaning that options become increasingly limited as the game continues. When robots take damage, they shed Armour tokens, which are dropped into the arena as Scrap. If a robot takes damage to a facing with no armor remaining, it takes Serious Damage instead; enough serious damage, and the robot is deactivated, ending the Bout and scoring a point for the opposing team. A game of Steel Colosseum is played to the best of three Bouts. Before each one, players have a chance to repair their robots and spend scrap on new Upgrade Systems. The available Upgrades are randomized each time you play.”

All-In (w/shipping): $119+ (estimate does not include full shipping costs)

Summary: “Thunderstone Quest is a fantasy deck-building game. Each player starts with a basic deck of cards that they can use to purchase, or upgrade to, other, more powerful cards. Thunderstone Quest brings new play modes to the table. The game will tell a specific story with a series of pre-set dungeon tiles, monsters, heroes and support cards. Each will come with a series of mini-adventures and a story booklet that tells players what happens as they progress through the scenarios. Once players have completed the quests they will be able to enjoy great replay value with the available selection of monsters, heroes, and support cards, as well as the new dungeon tiles, by choosing random set-ups before the start of play. Aside from heroes such as wizards, fighters, rogues, and clerics, cards will include supplies that heroes need like weapons, spells, items, or light to reach further into the dungeon. In Nature’s Wrath, the shaman Kar’nomal has become fed up with the impact of civilization upon the realm of nature. He and his followers seek to control the elemental forces of the world in an effort to let the wilderness in all its forms reclaim the entire world and all life in it. He will seek to strike at the Village, punishing all except those in step with the Elements. In Rotting Roots, a new guardian, Filleath has always felt he was destined for more, but it seems he’s always lived in the shadow of greater creatures, none greater than Ashbrow, the great tree guardian of the Deepwood. But a new pact with a being from the Abyssal lands will bring an end to all that. Now armed with dark powers, he will spread a blight that puts the entire forest in jeopardy.”

Funding Status: Funded; currently at 240% with 8 days to go.

Summary: “Play one the ‘Big Five’ meat packers, developing technologies to use every part of the animal while battling labor unions and manipulating the market to your advantage. Union Stockyards is played over six years (rounds), each beginning with an historical event affecting game conditions or adding an additional action. You select your actions through worker placement; however, if you don’t pay your workers enough, they may go on ‘strike.’ You earn cash based on your profit margins when you slaughter cattle, hogs, or sheep. Your profit margin is your meat value minus the livestock cost. The livestock cost is the same for all players, but your meat values will differ due to your engine-building decisions of constructing buildings, establishing branch houses in eastern cities, and improving your brand reputation. At the end of each year, livestock costs (cattle, hogs, sheep) will be adjusted up or down depending on the demand that you created. Sometimes you may choose to slaughter certain livestock just to manipulate the market in your favor. Whichever packer accumulates the most wealth wins the game.”