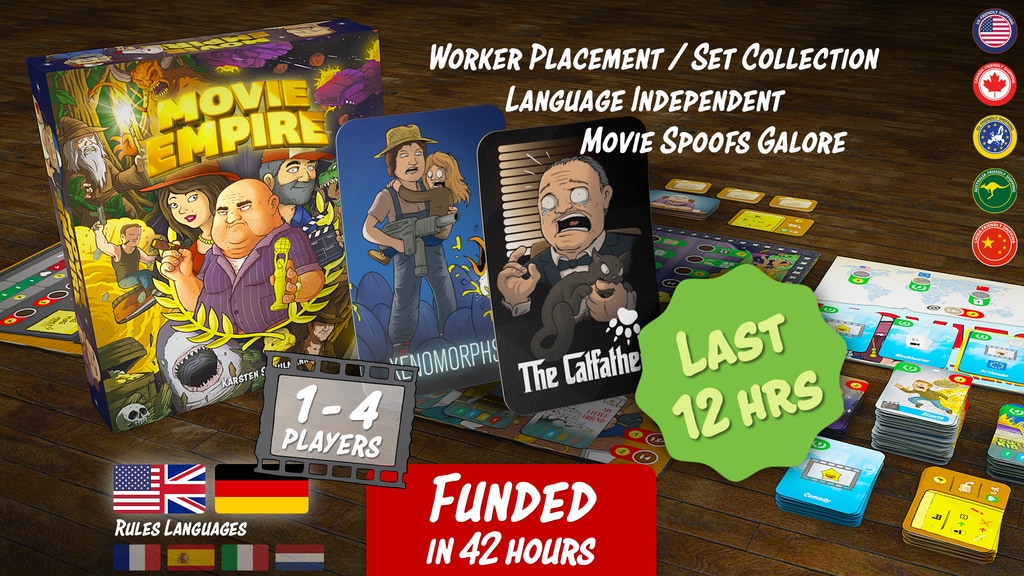 Funding Status: At the time of this posting, Movie Empire is already fully-funded. In fact, pledges currently total more than twice the initial funding goal.

How It Works: After receiving income each round, players use their production assistants (workers) to acquire scripts, cast stars, and obtain production assets from a card market.  On the general action board they can charge their credit cards for more money, order overtime and take extra production cards, exchange cards, denounce another player and cause them to lose sympathy (the metric for income each round) with Mr. Grumpy, be nice to Mr. Grumpy and gain sympathy, take the first player marker for the following round, or reveal secrets to obtain a black dossier. Scripts must pass through the Pre-Production, Shooting, Post-Production, and Marketing Phases, which require various cards for each phase depending on each particular film project.  Once the movie is completed, players send a production assistant to prepare a movie premiere after evaluating current trends. If they win an award, they’ll curry more sympathy with Mr. Grumpy.  Each time players premiere a new movie, they’ll score points based on the project, any stars involved, production assets, and available bonuses.  At the end of 10 rounds, players will score additional points for achievements like having the most movies produced overall, in a certain genre, or premiering films in every region over the course of the game.

Comparisons: The best comparison may be the similarly-themed The Networks; a card drafting, hand management, and set collection game about programming television network schedules.  It does not, however, include worker placement. A few notable games that include both set collection and worker placement include Keyflower, Tzolk’in: The Mayan Calendar, and The Voyages of Marco Polo.