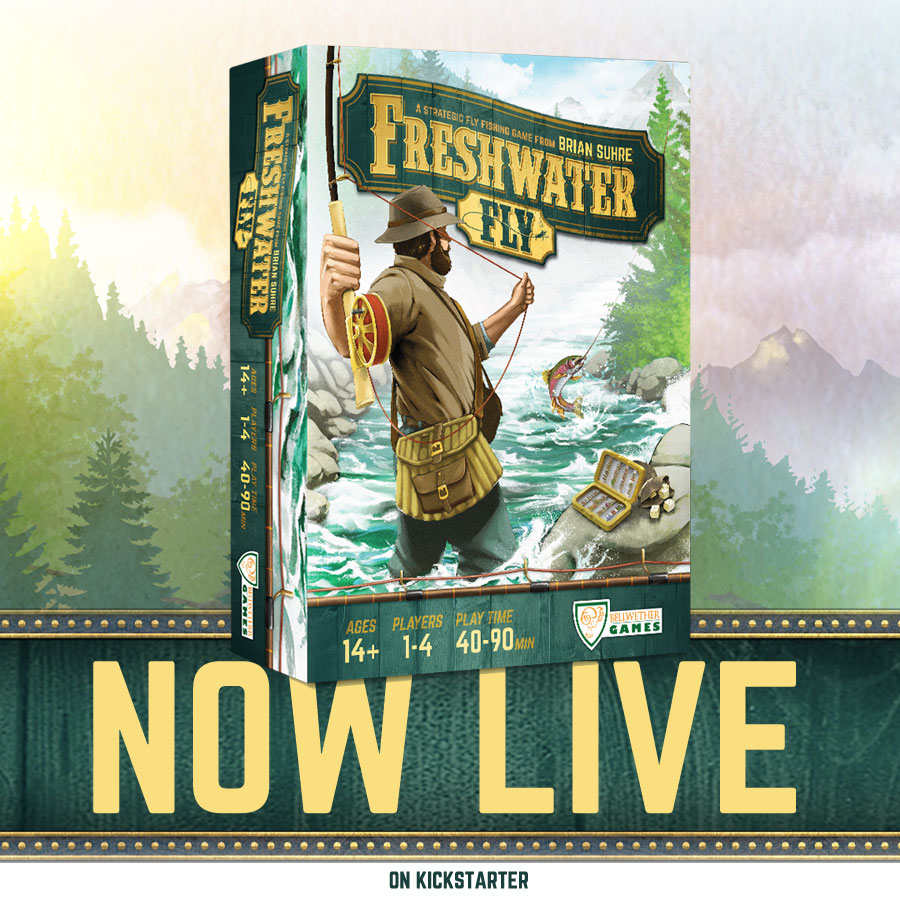 Artist: Darryl T. Jones (The Alwaysgreen Garden, Dobbers: Quest for the Key, Into the Black Forest)

Funding Status: At the time of this posting, Freshwater Fly is already fully-funded.  In fact, pledges currently total more than 3.5x the initial funding goal.

What It’s About: This fly fishing-themed, dice-drafting and set collection game features a rondel on the player boards simulating a fishing reel.

How It Works: Players draft dice each round, which can be used to Cast, Reel, or Finesse.  Casting allows players to earn 1-2 strike cards depending on if their cast aligns with matching Hatch tokens on the moving stream, and whether or not they drift downstream.  Reeling has the player balancing drag with momentum as they attempt to reel the fish in. Gaining 2 Finesse allows players to gain a better casting angle or recalibrate to the behavior of the fish on the line.  And Bonus Actions include Finesse Actions to gain extra Strike cards, modify dice values, move Hatch tokens, change a Fly, or apply Drag; Momentum Actions to gain a tile, and Skill Actions to gain special abilities.  The player with the lowest pip count of the round becomes first player in the following round.  After a player catches 7 fish, they trigger the end of the game.

Comparisons: Macao uses individual rondels on player boards, and Coloma (a redesign of Hangtown) uses a central rondel that affects all players and player actions each round.  Other fishing-themed games include Hey, That’s My Fish, as well as Coldwater Crown, another game designed by Brian Suhre and also available through the Freshwater Fly KS campaign.