Kickstart This! #194: Chronicles of Crime – The Millennium Series 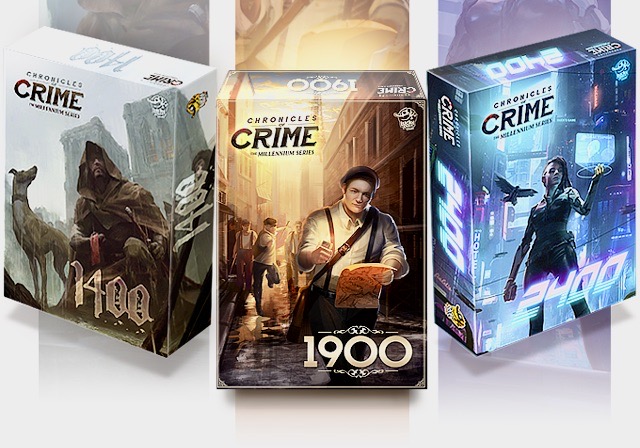 Publisher:  Lucky Duck Games (Above and Below, Chronicles of Crime, The Grimm Forest, It’s a Wonderful World, Near and Far, Tiny Towns, Vikings Gone Wild)

Funding Status:  At the time of this posting, Chronicles of Crime – The Millenniums Series is already fully-funded. Pledges currently total more than 7.5x the initial funding goal, with 3 days left to go on the campaign.

How It Works:   Playing Chronicles of Crime requires an app, currently supported by both Google Play and the Apple App Store. The narrative of the story evolves as players scan and investigate locations, and scan and question subjects. Scanning an Evidence Card of something players have found allows them to log the evidence. Scanning a Forensics Contact enables the players to consult with a virtual expert in the field at hand.

When play begins, or whenever play advances to a new location, players take 40-second turns looking at a given location to determine what they can see, describing their findings to the other players, who search for the matching Evidence Category Cards. Then players rotate, and a new player can observe the scene, until all players have decided they’re done with the scene and it’s time to move on. Each time a location or card is scanned, 5 minutes of game time passes. Each time players move to a new location, 20 minutes of game time passes. In some scenarios, the passing of time may affect certain locations. In all scenarios, players’ scores upon solving the case are affected by how quickly they were able to solve it.

When players believe they’re ready to solve the case, they’ll choose to return to the Home location, and then answer a series of questions, much like taking a final exam, which usually involves thecscanning of cards to provide answers.

The new Millennium Series changes the model by providing 3 different smaller box games, each containing 4 scenarios. Each game is standalone, and can be purchased by itself. But all three games share a family lineage between the in-game investigators, providing a bit of a narrative arc. This is over a period of 100 years, as the 3 games are set in 1400, 1900, and 2400. The Kickstarter also features a stretch goals expansion pack called The Chronicles of Time. Currently that pack also features 4 scenarios– one set in each of the 3 time periods, and a 4th stretching throughout all three time periods that requires all 3 standalone games to play.

Comparisons:  For anyone who has ever played a Professor Layton or Phoenix Wright: Ace Attorney (specifically the investigation scenes of the latter) video game, this is a board game version of those types of games. Or rather, half a board game version, because Chronicles of Crime still uses an app. Detective: A Modern Crime Board Game, which also first published in 2018, contains very similar in gameplay. Both games might be best though of almost more as an experience than a typical board game. The next closest thing is probably something like Mansions of Madness, which involves a large amount of discovery and investigation and also uses an app.

Chronicles of Crime – The Millennium Series completes its Kickstarter on Thursday, March 26th and tentatively ships in March 2021.