Kickstart This! #193: Vampire: The Masquerade – Vendetta 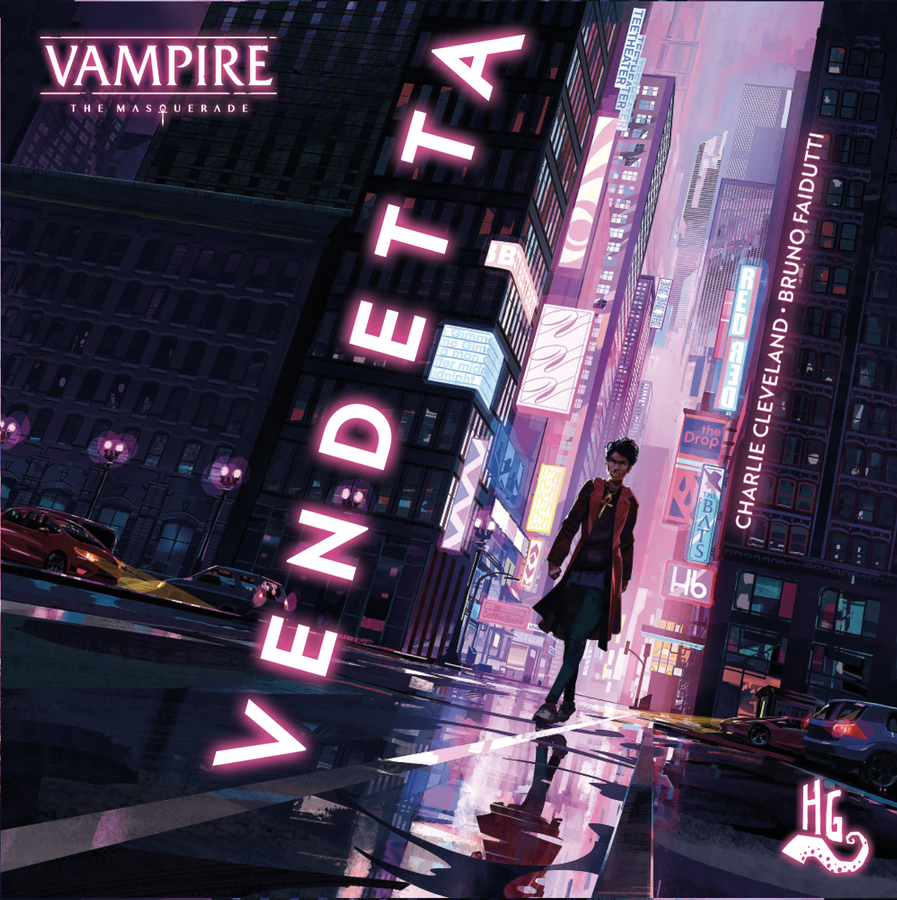 Funding Status:  At the time of this posting, Vampire: The Masquerade – Vendetta is already fully-funded. Pledges currently total almost 3x the initial funding goal, with 4 days left to go on the campaign.

What It’s About:  “A competitive card game of area control, bluff and treachery in which players scheme and fight for influence and power as immortal vampires, fighting to conquer the role of Prince of Chicago as one of the vampire Clans of the Camarilla.”

How It Works:  “The game is played over 3 rounds, with each round divided into 5 phases: Feed- Collect Blood from your Alliance; Location Setup- Add new Allies to all Locations; Hand Building- Choose a Clan card to add to your hand; Deployment- Play cards/Blood in turns, or optionally, Drain cards from your Alliance; and Resolution- Resolve conflicts at each Location, one by one.

During the Feeding Phase, players collect the amount of Blood Tokens from the sum of their Allies in the amount indicated on their various Ally Cards.

During the Hand Building Phase, players draw the 2 top cards from their Clan deck and secretly look at them, choosing 1 card to add to their hand, and putting the other card at the bottom of their Clan deck.

During the Deployment Phase, “players take turns playing cards (and optionally Blood Tokens) at one of the Locations. Additionally, at any point during this phase, they may also Drain one or more cards from their Alliance. The Deployment phase, different from previous phases, is played in turns. Starting with the player with the Ambition token, players take turns in clockwise order.  During each turn, players MUST play a card at one of the Locations, and MAY play up to 3 Blood Tokens at the same Location. At any point during their turn, they MAY Drain one or more cards from their Alliance. Players keep playing in turns until they only have 1 card left in their hand. Some cards may increase the amount of cards in their hand during a Turn. This won’t increase the number of cards they can play; all players should play the same number of cards each round.”

“During the Resolution Phase, players resolve conflicts over Allies at every Location, one at a time. The Resolution Phase itself is divided into 5 steps: Withdraw, Revelation, Preparation, Conflict, and Aftermath. All steps must be resolved separately, in order, for each Location. The Prince’s Haven is always resolved last. After all Locations are resolved, the round is over.”

During the Withdraw Step, players who played Clan cards at a Location secretly choose either their Fight or their Withdraw card and place the chosen card, face down, at their Position.  When all players are ready, they reveal their cards: if they reveal the Fight card, they declare their intention to join the Conflict; if they reveal their Withdraw card, they declare their intention to Withdraw. If they chose to Withdraw, they immediately take the Blood Token they played at the Location and put it back in their Pool. Then players reveal the Clan cards played at the current Location and move them all, face up, to their Position at the Prince’s Haven. Those players will not take any part at all in the conflict at the current Location.

During the Revelation Step, and “after all the withdrawing players have moved their Clan cards away, players reveal the face down cards of all fighting players. The Active Clan cards revealed in this step, instead, will only take effect in the following steps, depending on their kind.  There are 3 kinds of Active Clan cards: Preparation cards, Conflict cards, and Aftermath cards. They all have a Card Power value that will add to their Total Power during the Conflict step, but they often also have an effect, which is only applied during a specific step of the Resolution phase.”

During the Preparation Step, players “trigger the effect of Preparation cards. Starting with the player with the Ambition token and proceeding clockwise, apply the effects of each Preparation card. If players have more than one card at this Location that triggers during this step, they may decide in which order you activate the different cards. Each card must be entirely resolved before activating the next.”

During the Conflict Step, and “starting with the player with the Ambition token and proceeding clockwise, players apply the effects of each Conflict card. If they have more than one card at this Location that triggers during this step, they may decide in which order you activate the different cards. Each card must be entirely resolved before activating the next.” The players determine the winner of the Conflict, calculating their Total Power from the sum of Card Power on all of their cards, after applying their effects, plus the number of Blood Tokens played at the Location that round. The winner of the conflict obtains the Ally card placed on the current Location; the player with the second highest Total Power obtains a Victim card from the deck; the player with the third highest Total Power doesn’t obtain any card. When players obtain a new Ally/Victim card at the end of a Conflict, they can choose to either add it to their Alliance, or to immediately Drain it. Players also receive a different amount of Influence , depending on their position in the ranking, the round being played, and the Location is being resolved. The player that wins the Conflict at the Prince’s Haven Location gets 1 additional Influence and also receives the Ambition token. After winning the Ally card at the Prince’s Haven Location, the player immediately receives the Ambition token from the player who had it until that moment. From then on, that player immediately becomes the new First Player.”

“Then players trigger the effect of Aftermath cards. Starting with the player with the Ambition token and proceeding clockwise, apply the effects of each Aftermath card. If players have more than one card at this Location that triggers during this step, you may decide in which order to activate different cards. Each card must be entirely resolved before activating the next. After the Conflict step has been resolved for a Location, leave any Cards and Blood Tokens that were played at that Location. They will be taken back only at the end of the whole round.”

Comparisons:  At its heart, Vampire: The Masquerade – Vendetta is a rather simple combination of card play, including hand management, and area majority/influence. There’s some take that involved as well, and a variety of lighter mechanics to spice things and and add a little variability to the gameplay. The game it really calls to mind is The Godfather: Corleone’s Empire. That game also features card play and area majority/influence, and pits players against each other, battling it out for control of various board locations, using some take that mechanics. The most visible designer behind Vendetta is Bruno Faidutti, designer of Citadels and Mission: Red Planet. And finally, if you’re a Vampire: The Masquerade fan, there are several different games out there. But game licensing has been granting to several different publishers, so the types of games and their quality vary greatly. The include Blood Feud, a large party/negotiation game for up to 32 players; Chapters, a co-op adventure; and Heritage, a light, legacy-style game with some wargame mechanics.

KS Exclusives
The campaign states that many ad-ons and some stretch goals will be Kickstarter Exclusives that won’t be available later in distribution. Currently that only includes 14 full art variant cards, an exclusive Ally Card featuring Becca Scott, and the metal Ambition Token.

Vampire: The Masquerade – Vendetta completes its Kickstarter on Wednesday, March 25th and tentatively ships in December 2020.