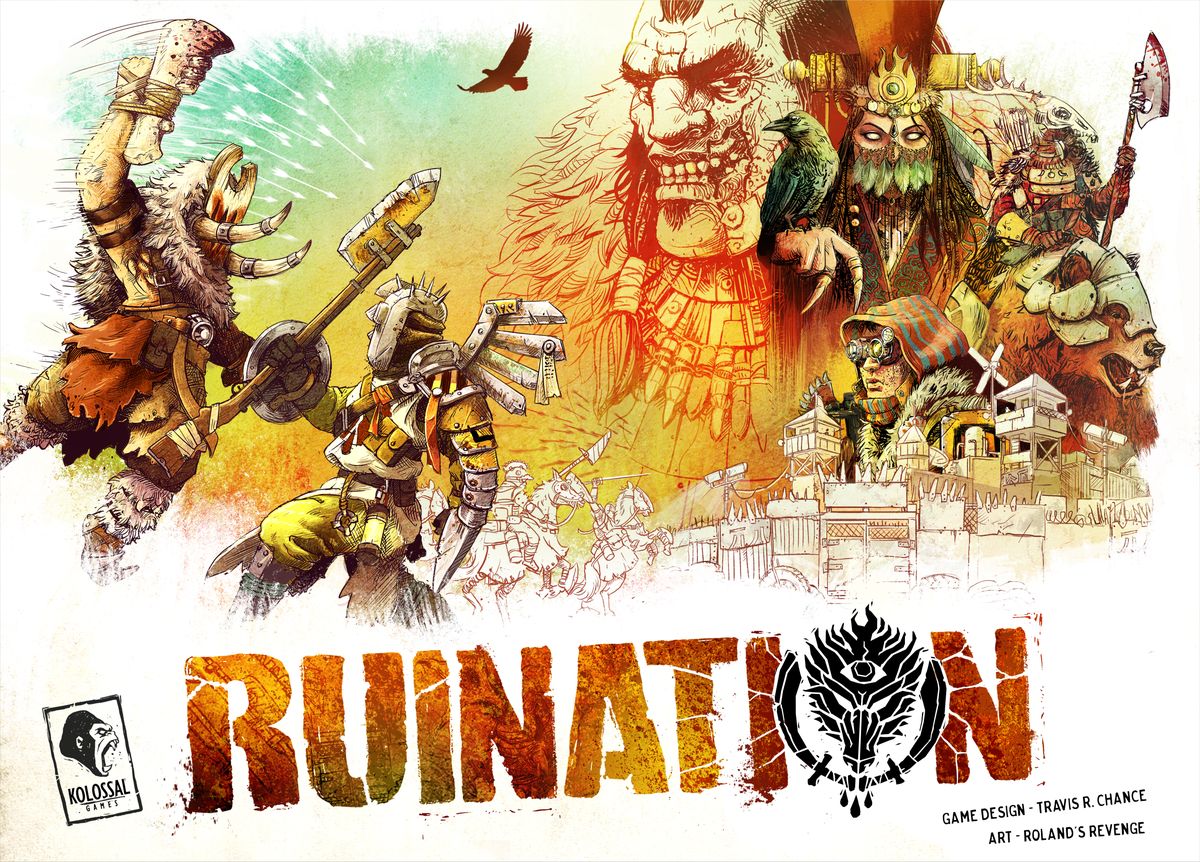 Funding Status:  At the time of this posting, Ruination is already fully-funded. Pledges currently total more than the initial funding goal, with 3 days left to go on the campaign.

What It’s About:  “An area control game with miniatures set in post-apocalyptic Eurasia.”

How It Works:   “As a horde leader, you will compete against your rivals to prove yourself worthy to the Khan. This will be measured in Victory Points (VP). VP is earned in many ways throughout the game, but primarily through participating in, and winning, battles.  The end of the game is triggered after a player has invoked the Khan’s Fury. A player can invoke the Khan’s Fury in a number of ways: gaining 10 or more favor or glory, gaining 30 or more VP, or playing the last card in an action deck. After the Khan’s Fury has been invoked, players will complete the current round and then play 1 additional round. The player with the most VP at the end of the game win.”

Until the end of the game is triggered, play progresses in a series of turns, beginning with the starting player and progressing clockwise each turn. On a turn, the active player 1) Chooses and resolves an action, 2) Resolves all battles, and 3) Checks army limits.

Gameplay revolves around 3 action card decks: the Move Deck, Recruit Deck, and Scavenge Deck. Each deck will have one face-up card displayed at all times. On their turn, the active player simply chooses one of the 3 face-up cards, then 1) Resolves the chosen action, which is different for each card, 2) Gain all the Favor and/or Glory on the card, and 3) Gain the bonus of the chosen deck type. Let me explain the bonuses of the various deck types.

When taking a Recruit Card, the active player recruits units with a combined cost of 3. Grunts cost 1, brutes and raiders each cost 2. Players can either recruit into a territory where they already have units, or any territory in their home region that doesn’t already contain enemy forces.

When taking a Scavenge Card, the active player either chooses 1 territory they control and gains resources of that type equal to the number of units there, OR gains 1 resource from each territory where they have 1 or more units. Then the active player can use resources to acquire 1 Advantage Card from the market.

Finally, players must check their army limits. Players are allowed to have more than 6 units in a given territory during their turn, but not at the end of their turn. Any territory they control exceeding 6 units results in the player having to kill the extra units.

Comparisons: At its heart, Ruination is an area control game featuring card play and skirmishing miniatures. Some similar games include Blood Rage, Cyclades, A Game of Thrones: The Board Game, Inis, Kemet, Rising Sun, and War of the Ring.

Ruination completes its Kickstarter on Thursday, March 26th and tentatively ships in May 2021.