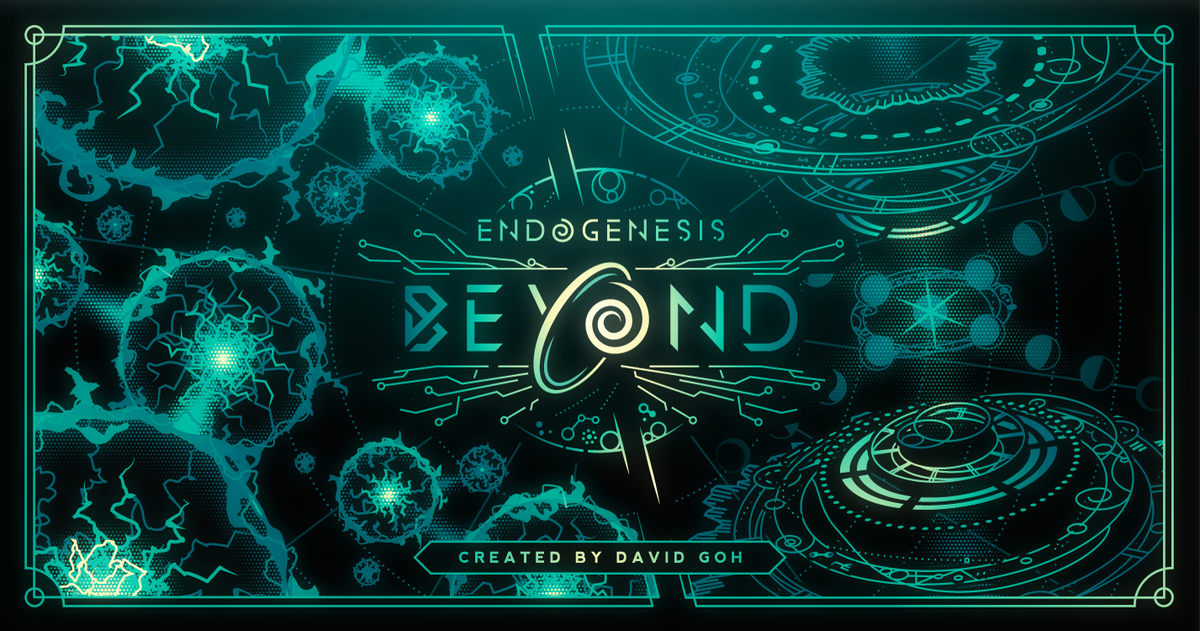 Funding Status:  At the time of this posting, Endogenesis: Beyond is already fully-funded. Pledges currently total more than 6x the initial funding goal, with 4 days left to go on the campaign.

What It’s About:  “A competitive, arena-styled card game set in a chaotic alien universe whose guardians have turned on each other, vying for ultimate godhood. Featuring strategic free-for-all combat, Endogenesis can be enjoyed competitively, cooperatively, or via solo play. Take on the role of a cosmic spirit with access to otherworldly realms. Collect skills from the Realm of Knowledge to customize your character with different powers, and upgrade them with Shards that you earn by defeating your enemies.”

How It Works:   The 2nd Edition of the base game Endogenesis features 3 different game modes: Standard, recommended for 3 players but capable of playing up to 5; Chaos Royale, a solo or co-op adventure, for 1-2 players; and Tactical, a faster, more stream-lined version for 3-5 players. We’ll be looking at the ruleset for the Standard Mode.

Each round of Endogenesis consists of 2 Phases: Draw and Combat.

In a normal round, players with no Prisms will each draw 3 cards and discard 1; the discarded card can come also come from the player’s hand. A player with Prisms draws and keeps 2 cards. At the beginning of the game, players will start with 4 Active Skill cards in their hand, and a number of Reaction Skills, Ultimate Skills, and Artifacts in a pile in front of them. Then, instead of drawing more cards, player will reveal the top card from the Realm of Chaos draw deck and place it into the discard pile. If it’s an Event Card, players will apply the card’s effects and draw another card. If a Distortion Card is drawn, it’s placed onto the labelled section of the board where its effects are continuous until the Distortion ends, and the players draw another card. When a Monster Card is drawn, the Combat begins; but first players turn the following card face-up so that they know what they’ll be facing next.

During Combat, players have a variety of actions to choose from: Equipping Skills (up to 3 basic and 1 Ultimate), Gaining Energy (by discarding cards), Using Skills (by expending Energy), Gaining a Class (playing a Glyph of Ascension Card), Upgrading Skills or Improving Max Health (by allocating Shards), Playing Wonders, and Skipping/Ending their turn if they have no other action to take, drawing a Realm of Knowledge Card. Upon ending their turn, they may not have more than 7 Realm of Knowledge cards in hand, and must discard down. Wonder Cards do not count towards the hand limit. All leftover Energy is lost when a player ends their turn, and any status effects on the players and Monster expire.

When players defeat a Monster, they collect the indicated rewards on the Monster Card. If a Monster is slain or escape, play is Suspended and players draw cards from the Realm of Chaos deck until another Monster is in play. If both players end their turn and the Monster is still alive, the Monster takes a turn, using its listed effects.

If a player collects 3 Prisms over the course of the game, that player wins. If the game ends and multiple players have 2 Prisms each, those 2 players will compare their scores, and the player with the highest score wins the game. In such a case, each Shard collected equals 1 point, each Max Health point from 1-10 equals 1 point, and each Max Health point from 10-15 equals 2 points.

“With the addition of the Endogenesis: Beyond expansion, the game has been greatly expanded with new Skills, mechanics and more ways to customize unique power sets.”

Comparisons:  Endogenesis feels primarily designed for 1-3 players. Yet it’s a co-op game at heart, so out go comparisons with head-to-head games like Ashes: Rise of the Phoenixborn, Magic: The Gathering, and A Game of Thrones: The Card Game. While Endogenesis is not a deck-builder, it has much in common game-play wise with games like Ascension and Aeon’s End. What sets Endogenesis apart, other than its true indie spirit and self-publishing, is the game’s design and production quality, not to mention it’s wonky (in a good sense) world-building and lore. I’ll leave you with this introductory quote describing the world and purpose of the game:

“In Endogenesis, you and your fellow players walk the path towards divine power. Beginning as ethereal spirits drifting across the cosmos of an infant realm, you grow restless after an eternity of serenity. Seeking more, you tear breaches into the fabric of the universe, searching for answers to questions still unknown. Plunged into a realm of knowledge, you gain a new understanding and appreciation for the beauty of creation. However, where you were all once equal in harmonious cohesion, travelling through these planes has blessed you with individualism… while cursing you with differences. Upon returning to your native universe, you discover that creatures from a realm beyond your understanding have invaded using the very same breaches you made. You valiantly defend your home and kill these creatures — but as you do, it becomes apparent that slaying these creatures empowers you, granting you their might… and possessing you with their hunger for greater power. With the disparity among your brethren ever-growing, envy and greed begin consuming all of you. Turning on each other, you descend into a vicious battle royale, striving to gain dominion over one another… never stopping, until one finally ascends to godhood.”

KS Exclusives
The Beyond Metal Token, a first player marker resulting from a stretch goal, is a Kickstarter-exclusive.

All-In Total: In the continental U.S., you’re looking at $74 for the Base Game & Expansion; shipping has already been factored in to all pledge prices.

Endogenesis: Beyond completes its Kickstarter on Tuesday, March 24th and tentatively ships in February 2021.