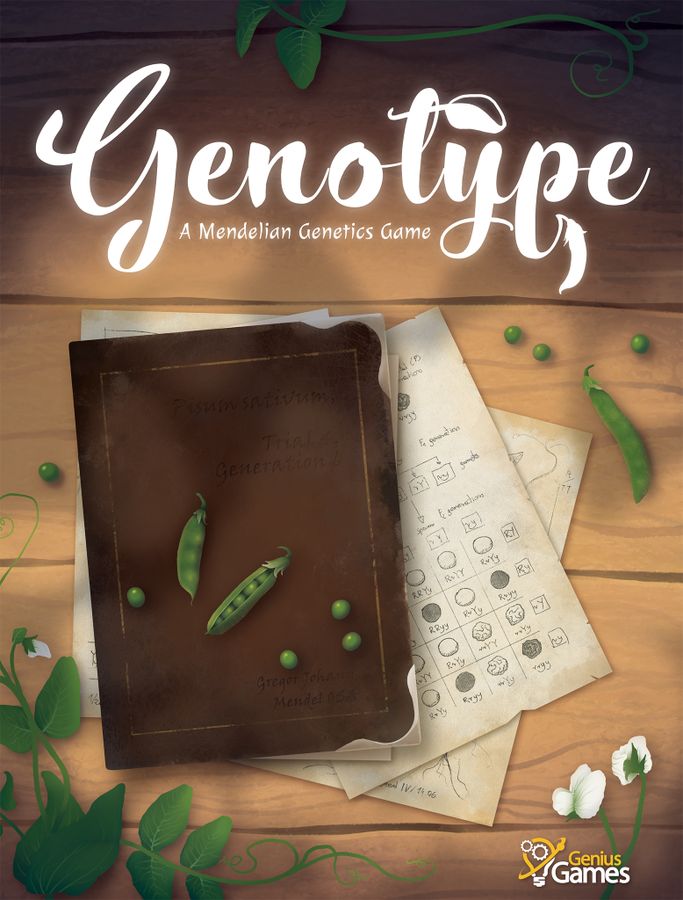 Artist:  Tomasz Bogusz (Cytosis: A Cell Biology Board Game, Periodic: A Game of the Elements, Subatomic: An Atom Building Game)

Publisher:  Genius Games (Cytosis: A Cell Biology Board Game, Periodic: A Game of the Elements, Subatomic: An Atom Building Game)

Funding Status:  At the time of this posting, Genotype: A Mendelian Genetics Game is already fully-funded. In fact, pledges currently total more than 17x the initial funding goal, with 5 and a half days left to go on the campaign!

What It’s About:  “A worker placement, dice-drafting game set in St. Thomas’ Abbey, where Gregor Mendel performed his paradigm-shifting experiments. 1-5 players take the roles of research scientists competing to collect and validate experimental data on pea plants. Players will spend time working on the monastery grounds, simulate plant breeding with dice and Punnett Squares, and use funding to further their research opportunities.”

How It Works:   “In Genotype, players are trying to collect experimental data on pea plants by observing how the plants inherit key traits from their parents: seed shape, flower color, pod color, and plant height. The observable traits of each pea plant (its Phenotype) are determined by its genes (its Genotype). The relationship between genotype and phenotype, and the nature of genetic inheritance, are at the heart of Genotype: A Mendelian Genetics Game.”

The game is played over 5 Rounds, with each Round consisting of 3 Phases: Working, Offspring Dice, and Acquiring Funding Upgrades. Players start the game with 3 Action Markers, but can gain more throughout the game from Funding Upgrades. During the Working Phase, players take turns placing their Action Markers on various board locations, executing the location as they do.

“In the Nursery, the player takes Pea Plant Cards as shown on the Action Space. Cards may be taken from face-up Nursery slots and/or the top of the deck. (The Nursery is not refilled until the end of the round).”

“In the Tool Shed, the player takes 1 Tool Card from a face-up Tool Shed slot or the top of the deck. If the Tool Card deck ever runs out, the player reshuffles the discard pile to continue drawing. (The Tool Shed is not refilled until the end of the round). Tool Cards provide one-time benefits when played and can generally be used at any time during a player’s turn. Once a Tool Card is used, it is placed in the Tool discard pile. Players may use Tool Cards on the same turn they are acquired.”

“For Setting Parent Genes, the player first collects the Coin on the corresponding Punnett Square, if available. They may then place or remove a Parent Gene Tile next to the row or column of the Punnett Squares where their Action Marker was placed. Players may not flip Tiles over; they must either add a Tile or remove one entirely. If the player is adding a Tile where there was not one, it may be placed on either side.”

“For 2nd Shift, the player takes no immediate action. When selecting dice, after the 1st Shift selections have been made, players with Action Markers in the 2nd Shift area have a chance to select one Offspring Dice from ANY Punnett Square. There is no limit to the number of Action Markers that can be placed on this spot (though players can only place one at a time). The 2nd Shift choices are made in the order that players placed their Action Markers, and precedes the normal turn order for selecting dice.”

“To Lecture, the player takes 2 Coins, which may be used in Phase 3: Acquiring Funding Upgrades, or kept for 1 point each at the end of the game.”

“When Gardening, a player places an Action Marker in the Gardening spot on their playmat and immediately performs the following actions in any order: Draws a card, Harvests Pea Plant Cards in their Garden, and Plants New Pea Plant Cards from their hand.”

“During the Offspring Dice Phase, players simulate Plant Breeding by rolling Offspring Dice for each of the four Punnett Squares on the Game Board. They take turns selecting and removing those dice to Validate a corresponding Trait on one Pea Plant Card currently in their Plots.”

“The phase begins with Plant Breeding. Players must roll each set of Offspring Dice and sort the results according to the values shown in the Punnett Square. For dice results of 1–4, locate the matching image on the Punnett Square, note the Gene shown in its row and column, and place the Die onto the corresponding Genotype slot.  Any Offspring Dice showing 5–6 are re-rolled once. If the dice now show 1–4, move it to the appropriate Genotype slot. Otherwise, place it into the De Novo Mutations box next to the corresponding Punnett Square. After all the Offspring Dice have been placed into the appropriate Genotype or De Novo Mutation slots, players then select dice matching their Pea Plant Traits in turn order based on shifts. When a player takes a die, they must place it in an available dice slot on their playmat to Validate a Trait on one of their Pea Plant Cards. This is done by placing a Trait Token on a matching uncovered Trait on a Pea Plant Card in one of their Plots. Validating every Trait on a Pea Plant Card makes it complete so that the Pea Plant Card can be Harvested with the Gardening action to score points.”

“Players continue to take Offspring Dice in turn order until they are no longer able to– either when their playmat is out of available dice slots, when none of the remaining dice match uncovered Traits on their Pea Plant Cards, or when all the dice have been taken. When all players are done taking dice, advance to Acquiring Funding Upgrades or simply trigger End Game Scoring in Round 5.”

At the end of a Round, the First Player Token passes clockwise, the Round Marker advances, the Cost Track Tokens of each Upgrade are decreased by 1, remaining Pea-Plant Card and Tool Cards are discarded and their slots refilled, 1 Coin is refilled on the indicated box of each Punnet Square if empty, and players return all Action Markers to their playmat and all Offspring Dice to the game board.

Comparisons:  Last November there were Kickstarters launched simultaneously for Darwin’s Choice and On the Origin of Species, which are very thematically similar to Genotype. Perhaps even better comparisons are the other games from Genius Games, which also focus on science, but in different ways– Covalence: A Molecule Building Game, Cytosis: A Cell Biology Board Game, Ecosystem, Ion: A Compound Building Game, Linkage: A DNA Card Game, Peptide: A Protein Building Game, Periodic: A Game of the Elements, Subatomic: An Atom Building Game, and Virulence: An Infectious Card Game.

KS Exclusives
It remains to be seen if the Collector’s Edition will make it to retail, but if it does, it will not include the box upgrade with metallic paper, a negative printing technique, and individual numbering.