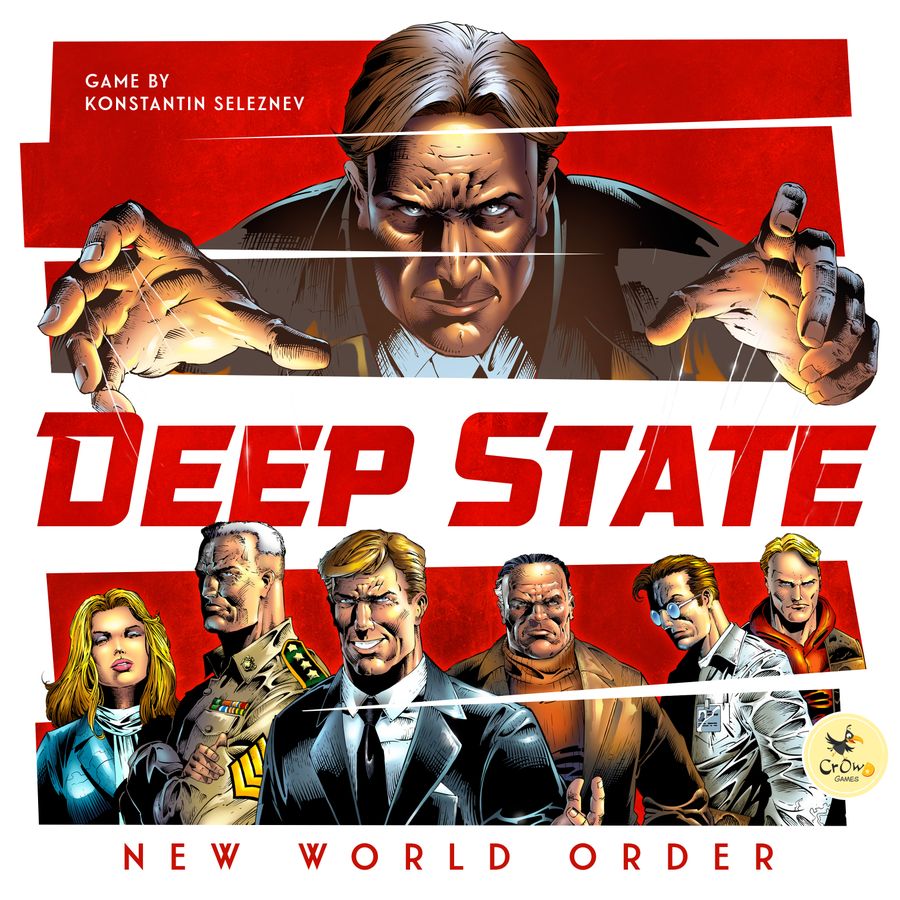 Funding Status:  At the time of this posting, Deep State: New World Order is already fully-funded. Pledges currently total more than 2x the initial funding goal, with just under 6 days left to go on the campaign.

What It’s About:  Players are leaders of a secret organization called “The Committee,” in this dystopian game of world domination and global conspiracies, where they vie to become the leader of a single world government.

When Inflitrating, the active player places the required number of their Agents on one of the first 3 Objective Cards. If there are already another player’s Agents there, placing the same number of Agents + 1 will Over-Infiltrate the card and drive the other player’s Agents away (they’ll get to draw a card from the Treaty Deck if this happens). That also means that placing more than the required number of Agents on a card can be used as a defensive measure to prevent other players from Over-Infiltrating in the future.

When Carrying out a Covert Operation, the active player takes the upper card from the Covert Operation Stack, places the required number of Agents on it, and the player will score the indicated number of Influence points depicted on it at the end of the game. The card may not be taken if the player does not have sufficient Agents, and because the card immediately becomes that player’s card, there is no need to Over-Infiltrate.

Then, in clockwise order, the other players take one Action each. In addition to Infiltrating and Objective Card or Carrying out a Covert Opertaion, they may also choose from Advancing in a Project or Recruiting an Agent.

When a player Recruits an Agent, they simply move one of their Agents from the Recruiting Pool to their Active Reserve.

Players score points from Objective cards; Governments, Universities, and Stock Exchanges cards; Crime Syndicate cards; Corporation cards; Inner Circle cards not attached to other Objective Cards; Covert Operations cards; and Projects where the Shady Coordinator has reached Stages IV-V. The player with the most Influence Points wins the game, with ties broken by the player who has reached Stage V of any project, and then by the player who has reached the highest level of a Deep State Project.

Comparisons:  The theme of secret government organizations fighting for global domination reminds me of Pandasaurus’ recent Kickstarter for Godspeed, although that game is focused specifically on the space race. There are also going to be some design similarities with CrowD Games’ other original published project, Space Explorers. Sentient has a similar worker placement/majority mechanic for acquiring cards. Pax Pamir, while very different in gameplay, finds players choosing and alternating between the different sides of warring armies. Black Orchestra is a cooperative game using action points and variable player powers as players try to stop Hitler during World War II. And finally, Specter Ops is a spy- and stealth-themed deduction game with hidden movement and miniatures from the designer of the Century series.

All-In Total: In the continental U.S., you’re looking at $49 for the Ruler of the World pledge plus $9 in shipping for a total of $58.