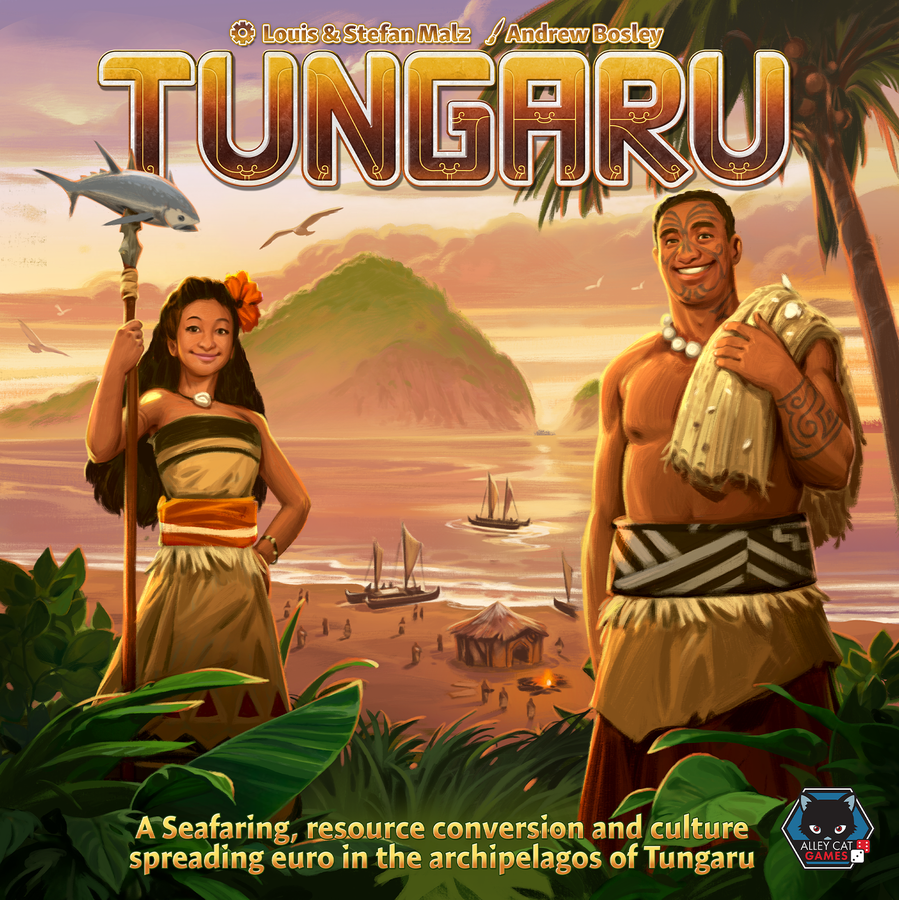 Funding Status: At the time of this posting, Tungaru is already fully-funded. In fact, pledges currently total more than 5.5x the initial funding goal with 2 days left to go on the campaign.

What It’s About: “Tungaru is an engine-building, resource-management and dice-placement Euro. In the early sea-faring days of the Pacific Islands, you will set out to spread your culture across the archipelago of Tungaru. Gather resources, enlist the help of your culture’s Leaders and attract Nomads to help your culture prosper.”

How It Works:  Tungaru is played over several rounds, with each round consisting of 4 Phases: Roll the Dice and Get Goods, Choose Leader, Perform Actions, and Cleanup. During Roll the Dice and Get Goods, the active player rolls 3 of their 4 dice, re-rolling them if all 3 show the same result. Then the active player places the 3 dice onto the dice spaces of their boats, and saves the 4th die beside their Culture board until they decide to play the Worker in Phase 2. During Choose Leader, each player secretly chooses one of their Leader cards and places it face down in front of them. Once all players have placed their cards, players simultaneous reveal them and carry out the depicted abilities for Leader cards 1-4 (Leader card 5 is resolved during Clean-up, except when end game is triggered, and then it is not resolved at all).

During Cleanup, the Chief (Leader Card 5) is resolved, unless the Migration piles are emptied, in which case the end of the game is triggered instead. During final scoring, players receive victory points for recruited Nomads and their associated bonuses, and then the player with the most victory points wins.

All-In Total: In the continental U.S., you’re looking at $53 for the Tungaru Deluxe Edition pledge and $6 in shipping for a total of $59.

Tungaru completes its Kickstarter on Thursday, November 28th and tentatively ships in September 2020.