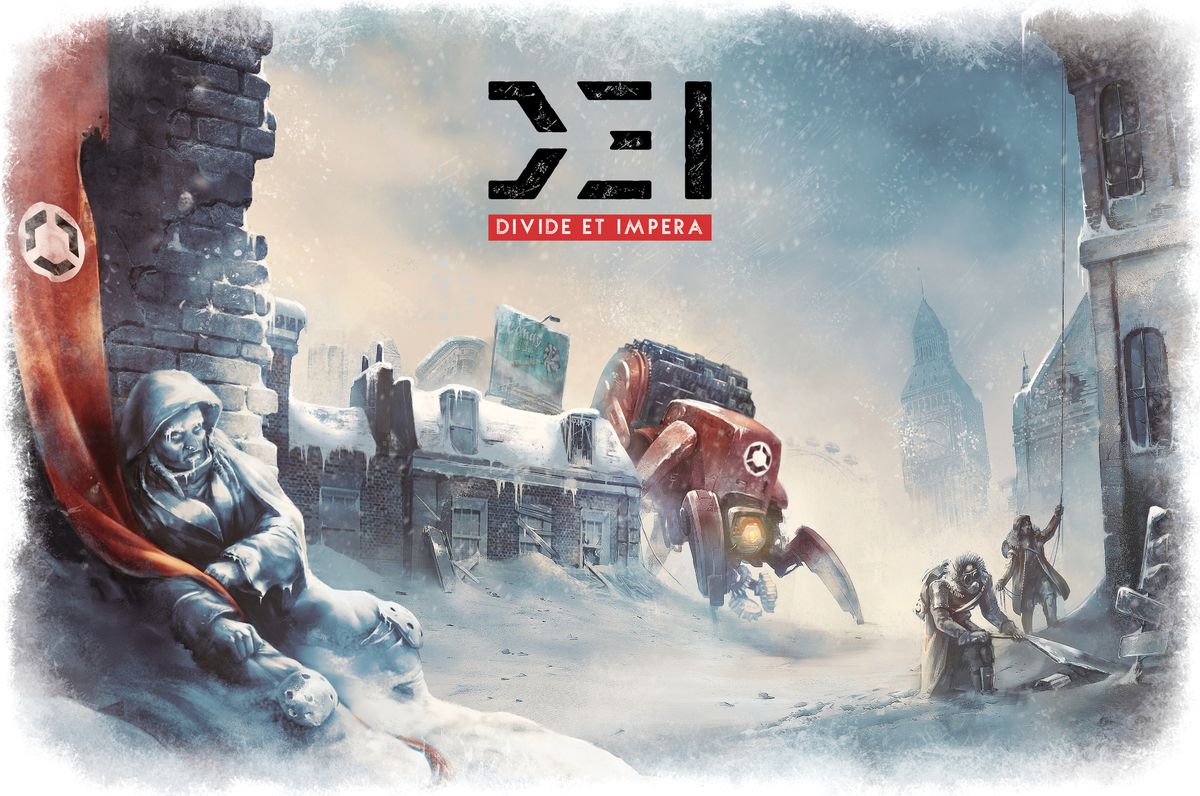 Funding Status: At the time of this posting, DEI: Divide et Impera is already fully-funded. In fact, pledges currently total more than 2x the initial funding goal with 2 days left to go on the campaign.

What It’s About:  A re-implemention of the publisher’s own Sine Tempore, Divide et Impera is “a competitive game based on conquests of resources, set in a world devastated by a New Ice Age.” Divide et Impera features miniatures, but is more of a Euro-style game with various mechanics, including worker placement, than a skirmish game.

How It Works:  Divide et Impera is played over 4 rounds, or Turns, with each one made up of 3 Action Phases and a Clean-Up Phase. During the First Action Phase of each Turn, each player plays 2 Faction/Market cards, taking the associated actions. Actions available via Faction/Market Cards includes the likes of: Enlisting (deploying a Scrapper, moving it from the player’s Reserve to a Region with a Refuge); Moving; Collecting Resources; Constructing Refuges, Buildings, and Elevators; and activating the Purebred’s Harvester, Transporter, Teleporter, or Reaper Drones. An additional Action can be added through the use of a Candy Boost. Some actions, like Moving into a Region where Scrappers of another Faction are already placed, or Collecting Supplies in a Region, require a Majority in that Region.

The Second Action Phase is identical to the First with one exception. After the Second Action Phase has been completed, any Feats with at least 2 Outpost cubes of the same color on the pad are unlocked and flipped over to reveal a bonus ability. The Third Action Phase is also identical to the First, with one different exception. After the Third Action Phase has been completed, players must assign one of their 4 Mission tokens to one of the Purebred missions, evaluating either the top or bottom of the chosen Mission depending on the Mission’s placement in relation to the current Turn. Finally during the Clean-up Phase, players discard face-down Faction/Market cards from the Pad to the Recycle Bin, return face-up Faction/Market Cards to the player’s hand, pass First Player token to the left, and advance the Turn Market.

After the 3rd Action Phase of the 4th Turn, players skip the Clean-up Phase and proceed directly to end-game scoring, gaining 1 Supply for each controlled Outpost; 1,3 or 6 Supplies based on the number of Feats unlocked; 1 Supply for each 2 Technology tokens owned; and 1 Supply for each Energy Cell token owned. The player with the most Supplies wins the game.

Comparisons:   The two easiest comparisons are Tommaso Battista’s Barrage, although one should keep in mind that Barrage was co-designed by Simone Luciani, and any production problems with that game should be placed squarely on the shoulders of its publisher, Cranio Creations, and not on Battista; and Sine Tempore, the game that inspired D.E.I. and that D.E.I. reimplements. But whereas Sine Tempore takes place on an alien planet, D.E.I. is set on Earth following a new ice age. And while D.E.I. does incorporate miniatures, it’s more of a Euro and worker placement game at heart. Last Aurora shares many similarities, but that game has yet to deliver from the Kickstarter that ended a few months back.

What Should I Pledge?:
$88 Scrapper: the Divide et Impera Core Box, the Penny KSE miniature, and all unlocked stretch goals.
$121 Leader EB: the Scrapper pledge, plus the Red Zone KSE expansion.
$132 Leader: the same pledge as the Leader Early Bird, but not limited to 1,000 backers.