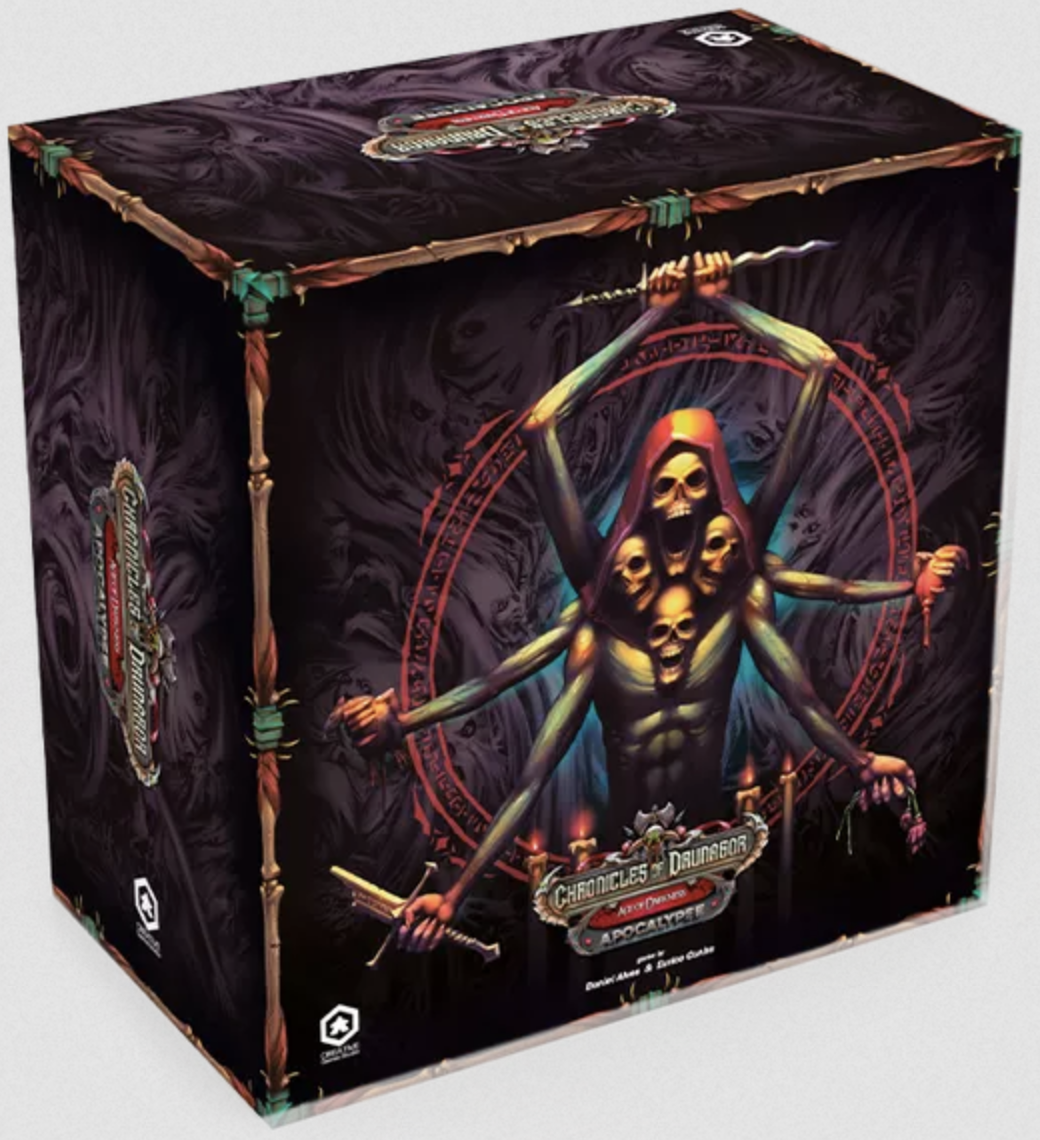 Project: Chronicles of Drunagor: Age of Darkness Apocalypse (on Gamefound)

Summary: “A massive expansion that brings another chapter in Daren’s fight against Darkness. Through 16 adventures that present new mechanics and level structures, unravel Drunagor’s culture and mythology in an enhanced Campaign development experience where your choices will change the adventures you will face and the conclusion of your narrative. Chronicles of Drunagor – Age of Darkness is a fully cooperative and strategy board game of tactical combat and dungeon crawl adventure. CoD-AoD is based on multiple 3D scenarios, each of them played separately or on a continuous storyline. Each scenario has its own unique setup, darkness rules and different goals that will be needed to be achieved in order to obtain victory. Played over a series of rounds until either the chosen adventure objective is achieved by the heroes or a single hero dies or is corrupted by the darkness itself. The order of activation is dictated by the initiative track and it alternates between heroes, monsters and the darkness itself. Once they all activate, a round is over and a new one begins, so players win or lose as a team. The game is won when the adventure objectives are met. The game is lost when one player is either killed or corrupted by darkness.”

All-In (w/shipping): $380, the highest pledge level includes the all-in from the original campaign, but not the new content; backers will have to add it onto their pledge, bringing the total to $435, plus any additional add-ons featuring new content, as well as shipping

Summary: “A tile-colliding, volcano erupting, mountain-making, wisdom-gathering, action-economy strategy game. On individual player mats, players move their Followers between action spaces, allowing them to manipulate a shared environment like a giant puzzle of plate tectonics. Action spaces allow players to shift rows of land, move and collide land tiles, form and erupt volcanoes, worship to gain wisdom, journey their Followers around the ever-shifting landscape, and build sacred places of study and worship on mountains. Building sacred places and worshipping in sacred places brings wisdom which is used to improve the abilities available for each action space. Wisdom is also used to improve the end game value of each sacred place built as well as reach other goals worth end game points. At the core of Oros is the unique ability to shift, move, build up, erupt, and reposition the land within an infinitely connected play environment. This mechanic turns every action into a puzzle of creative problem solving, abstract thinking, and a constantly evolving strategy.”

Summary: “A high-spirited party game that throws you into the most outrageous scenarios you can imagine. But don’t worry, you get to collect 5 (maybe not so useful) items to help you survive. It’s up to you to convince the other players that you’d make it out alive to become the ultimate survivalist.”