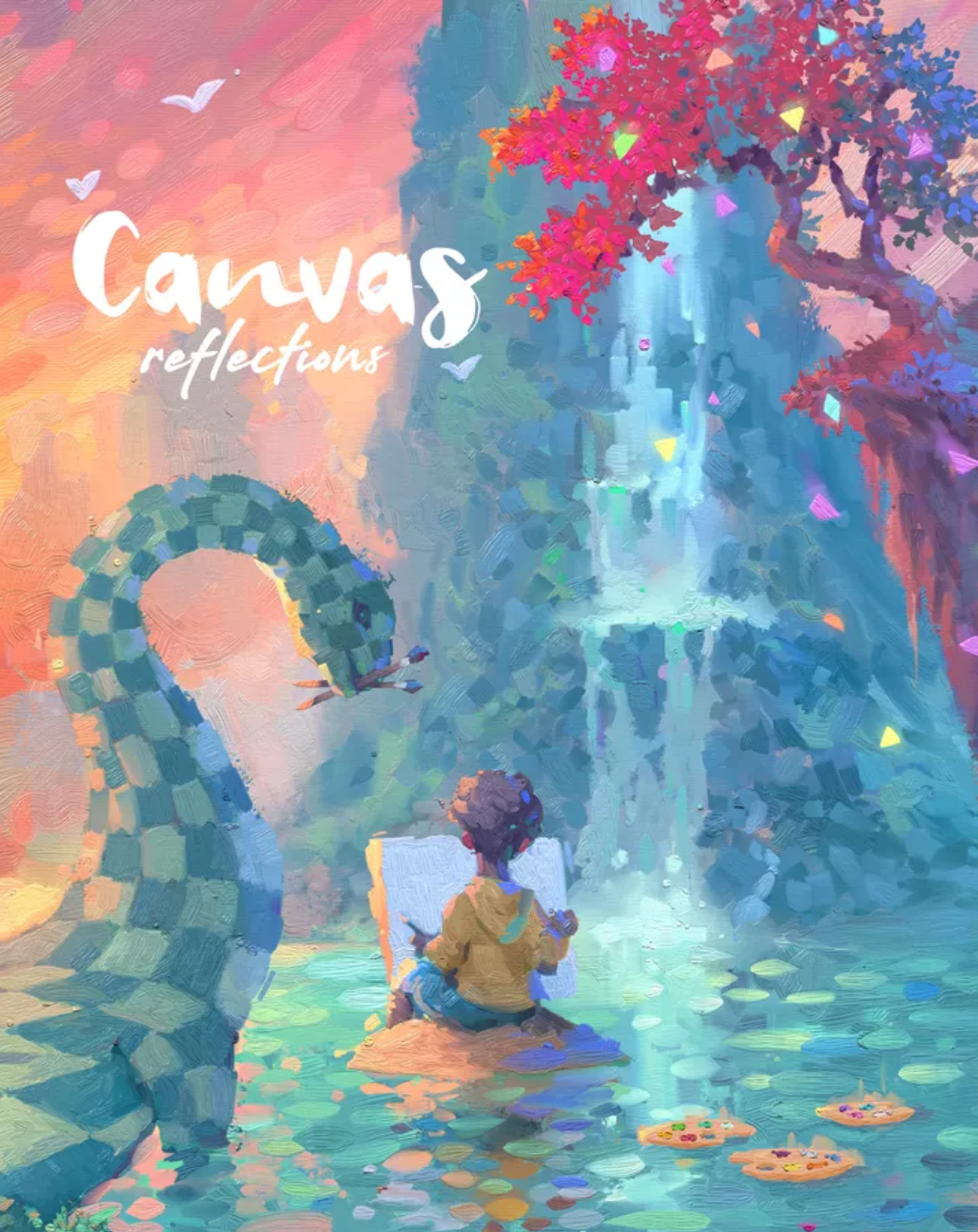 Summary: “In Bar Fight, you represent a bar competing in the world’s most prestigious bartending competition. Each bar has it’s own unique bonus ability, and signature and classic cocktails that can boost your score. Each round you’ll make a drink by combining Spirit, Mixer, and Flair cards in order to impress the specific Judge for the round. Different ingredients have various effects on each other, and the Judges have their own preferences, so there are countless ways to make a great drink. Judge cards are revealed three rounds in advance, so players must both impress the current Judge but also plan ahead for future rounds.”

Summary: “Canvas: Reflections is an expansion to the critically acclaimed transparent card layering game, Canvas.  In Canvas, you play as a painter competing in an art competition. Players will collect art cards, layering 3 of them together to create their own unique Painting. Each card contains a piece of artwork as well as a set of icons used during scoring. Icons will be revealed or hidden based on the way players choose to layer the cards making for an exciting puzzle. Paintings are scored based on a set of Scoring cards which will change each game. Once players have created and scored 3 paintings the game ends. In Canvas: Reflections, the artistic puzzle has a new layer — Mirror Cards. These reversible cards add deeper strategy, and also give you increased flexibility to string together combinations of Elements. Additionally, the new board offers a wider selection of Art Cards that allows you to better plan ahead and presents more choices even when running low on Inspiration Tokens. Also features Gold Bonus Ribbons – Grab a Gold Bonus Ribbon for lining up a specific Element next to a Gold Bonus icon; and New Scoring Cards for puzzling new challenges and added replayability.”

Base Pledge (w/shipping): $33, Canvas: Reflections only

Summary: “Cellulose is the standalone sequel to Cytosis, and has some of the same DNA, but Cellulose expands familiar game systems, allowing players greater control over available resources, strategic paths, and even game length. Cellulose: A Plant Cell Biology Game is a worker placement game that puts players inside a plant cell, where they compete over limited resources in order to undergo photosynthesis, produce carbohydrates, and build the cell wall. With everyone vying for the same actions, players must time their use of proteins, hormones, and cell component cards in order to diversify their strategies and outplay the competition.”

Summary: “Darkpass is a collaborative, campaign-based tabletop dungeon crawler (featuring card management and truly developed solo play), that takes place in the dark and dismal 1854 Paris sewer system. The butcher, blacksmith, alchemist, and host of other characters combat a stream of ravenous beasts as they make their way through the grime and filth, deducing the best way to survive and forge ahead on their journey. Throughout the campaign, characters become stronger and more skilled as they progress through deeper, darker and more difficult chambers.”

Summary: “A tile-laying strategy game inspired by games like Othello and Honey Bees. In Hivernation, players assume control of one of two factions, Drone Bees or Worker Bees. Each player takes turns building a hive around Queen Zizi, the matriarch and anchor of the game. As the hive develops players can add to their bees by playing bee tiles from their hand or converting their opponent’s bee tiles using the Pincer Movement. They can also play specialty tiles from their stack to convert their opponent’s bees as well. The player with the most bees face up dominates the hive and wins the game!”

Summary: “The Korean War: June 1950-May 1951, Designer Signature Edition marks the return of a true wargaming classic by Joseph Balkoski, first published in 1986, faithfully remastered and updated with this all-new, supersized edition. Hailed by many as one of the premier games covering The Korean War, this two-player operational level simulation covers the first year of the Korean conflict, from June 1950 to May 1951. The players control ground and air forces of the United Nations, North Korea, and Communist China. Each player’s force consists of a wide variety of units, including infantry, marines, paratroopers, armor, and aircraft. This edition of The Korean War features a super-sized map and larger counters and is another Classic Reborn! by Compass.”

Funding Status: Funded; currently at 190% with 8 days to go.

Summary: “You’re the boss of the most badass squad of mercs, fixers, and runners in the Sprawl. Make deals to secure top-of-the-line upgrades for your crew, and score the most rep by the end of three cycles. The mechanical heart of Rivet Heads is its assembly line. Part action programming, part resource conversion, mastering its rhythm is the key to victory.”

Artist: Dennis Lohausen (AquaSphere, Bonfire, Camel Up, Coal Baron, Crown of Emera, Dominion: Intrigue, A Feast for Odin, Fields of Arle, Gaia Project, Glass Road, Hansa Teutonica, Hawaii, Luxor, Marco Polo II: In the Service of the Khan, Merlin, No Thanks!, The Oracle of Delphi, The Quacks of Quedlinburg, Rajas of the Ganges, The Taverns of Tiefenthal, Terra Mystica, Village, The Voyages of Marco Polo)

Summary: “On a turn, the active player rolls up to six dice (one at a time) and advances their racer according to the results. But be careful! If you roll doubles, you must draw a crash card and anything can happen; depending on the double you may get a boost or be slowed down, letting others catch up. However, you can gain bonus cards for repeated doubles that can make up for lost position, if used correctly. Scrap Racer is a push-your-luck dice game that is suitable for novice gamers or seasoned veterans looking for a raucous experience. A race lasts for three laps, and whomever leads the field at that point will be the winner. Each racer needs boldness, tactical skills, and some good luck if they want to be the winner at the end of the race.”

Funding Status: Funded; currently at 622% with 8 days to go.

Summary: “Storm Weavers is a story driven game for one person. The player reads the situation in the book and chooses his action, which leads him to another section of the story. You roam the world drawing the map and exploring various locations. Sometimes your way will be blocked by bloodthirsty enemies. Then a confrontation begins, a tactical part of the game carried out on the board with the participation of battle maps, minis, and dice. Storm Weavers is a unique combination of classic gamebook with an element of tactical combat taking place on the board. As a dwarven warrior, you undertake a journey across the vast land of Midgard to find and rescue your friend. To achieve your goal you must overcome a sinister adversity. As you travel from location to location, you have to face strong orcs, clever goblins, bloodthirsty wolves, ice giants, almighty gods, cowardly wizards, greedy merchants, bad people, good people… can they stop you from reaching your goal?”

Summary: “Based on the lovely illustrated world of Matt Dixon, Transmissions brings his world of mechanical friends to life. In the game, players share robots as workers moving around a rondel-styled board, collecting engrams and electricity. These are used to gather ideas to improve your use of the robots or items to score points at the end of the game. You also build your own set of connected, flowing pipes while gathering birds and butterflies to score even more points. The game ends when no ideas are left, a player’s robots are complete, or no pipes remain to be built. The game features a unique mechanism of worker selection and sharing with incredible illustrations, adorable miniature robots, and very welcoming play for everyone.”