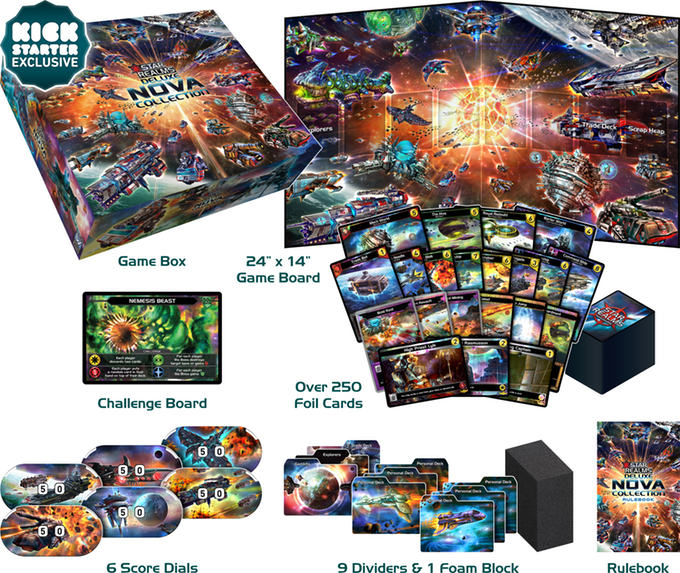 Artists: Pawel Niziolek (Escape Tales: The Awakening, This War of Mine: The Board Game, Tristmegistus: The Ultimate Formula), Jaroslaw Wajs (A4 Quest, Lifeform, Pocket Mars)

Summary: “Micro City is a small game about building your city. Several game modes, various challenges, different levels of difficulty and random distribution of districts will make each game different. Micro City second edition introduces 2 completely new game modes and several changes to the base game. It’s still primarily a solitaire game but now you can also play against another player or face challenges together in a 2 player coop mode.”

Summary: “Star Realms is a fast-paced game of space battles that combines the fun of a deckbuilding game with the interactivity of Trading Card Game-style combat. The Nova Collection features… foil versions of every card from Promo Pack 1, the Gambit Set, Crisis: Bases and Battleships, Crisis: Events, Crisis: Heroes, Crisis: Fleets and Fortresses, the Cosmic Gambit Set and the Star Realms Base set with 6 starting decks and extra Explorers. The set also includes 6 big scoredials, a… game board, and a box that holds this collection with or without sleeves.”