Kickstart This! #316: Vindication Board Game and Chronicles Expansion 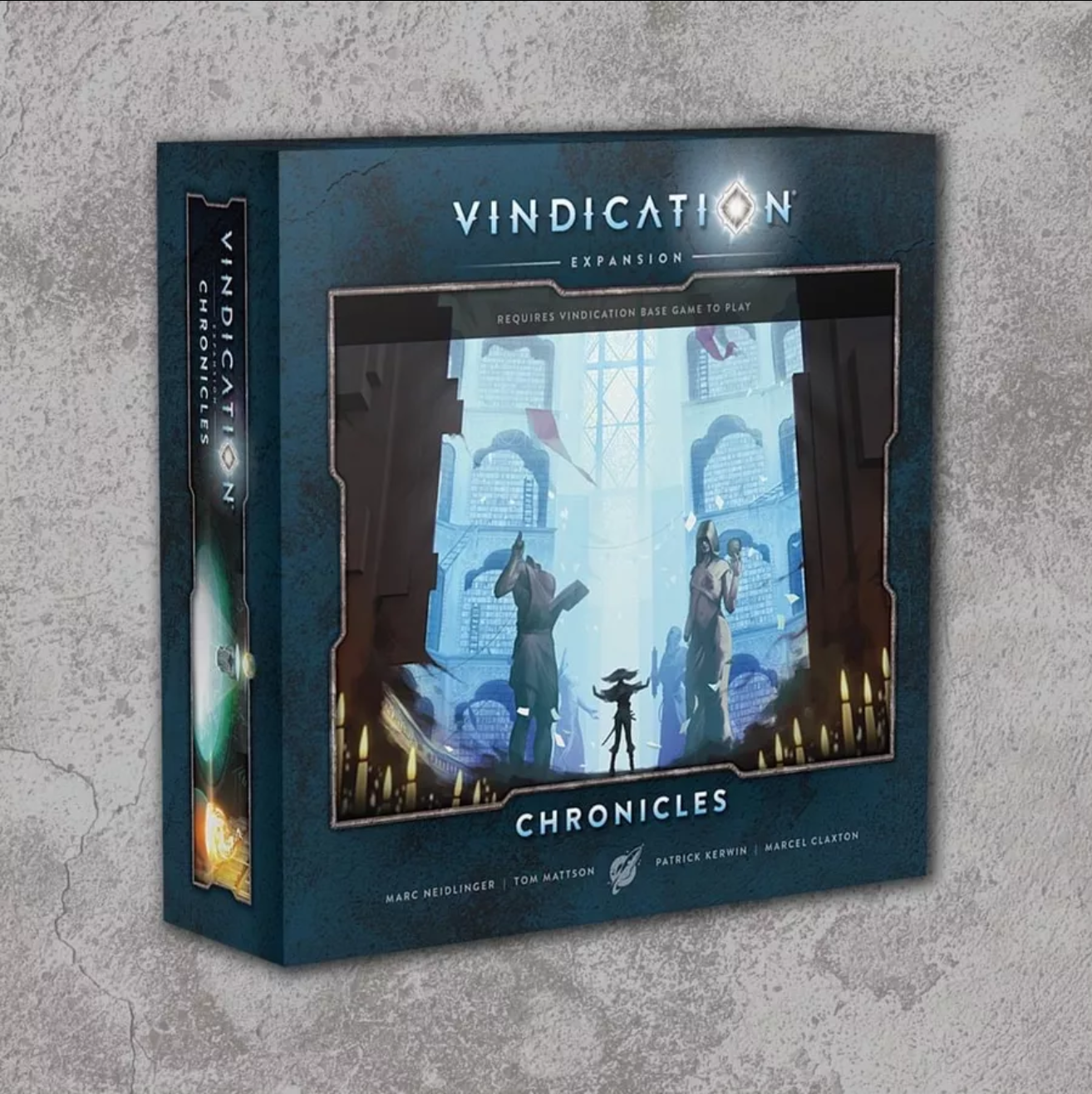 Funding Status: At the time of this posting, Vindication Board Game and Chronicles Expansion is already fully-funded. Pledges currently total more than 9x the initial funding goal with 2 days left to go on the campaign.

What It’s About: “The road to restoring your lost honor goes deeper with Chronicles, the second expansion to Vindication. Chronicles adds more narrative, immersion, and story to the existing Vindication experience, both for the island itself and for your own personal journey. Decisions are further recorded on new, large, full color paper player sheets. Make enough decisions embodying a certain attribute and you become legendary for that attribute, gaining you a powerful new ability and a big gorgeous tarot card to place next to your wretch tile to help you feel extra good about your progress. This campaign is also an opportunity to pick up the recent Vindication: World Box Odyssey Bundle and Wintertide Promo Pack, as well as all previously released Vindication promos, the base game and the previous expansion.”

How It Works: “Thrown overboard for a life of wretchedness, you wash ashore a hostile island ruins — completely alone with nothing except the breath in your lungs and an undaunted spirit. Through your advanced resource management, area control tactics, and freeform action selection, you’ll add companions to your party, acquire bizarre relics, attain potent character traits, and defeat a host of unusual monsters in the ultimate goal of mastering heroic attributes — and regaining honor.

You may perform 3 actions on each turn in the order you feel is most advantageous that turn: activate a companion, travel to a new location, and interact with a map tile. Many actions require the the use of your influence to gain attributes in a one-of-a-kind heroic attribute alchemy system, which is leveraged to gain the game’s most powerful rewards. For example, you can meditate at a spire to gain inspiration. You can train at a fort to gain strength. But then you can combine your inspiration and strength to gain the courage (inspired strength) which allows you to perform a bounty hunt. There are distinctive end-game triggers that can be affected through gameplay, over 72 unique card abilities that can be merged in unusual ways for potent combinations, and fresh tile placement each game for high replayability.”

“Chronicles adds more narrative, immersion, and story to the existing Vindication experience, both for the island itself and for your own personal journey. Narrative-choice chronicle cards add a layer of decision and intrigue that bring your story to life. Each time you gain a card in the game (companion, relic, trait, monster, pet, etc) another player will draw and read a chronicle card, which presents you with a narrative prompt and a decision, ultimately telling the story of how you obtained that card. As you grow your tableau, so too do you chronicle your own journey. These decisions are further recorded on new, large, full color paper player sheets. Make enough decisions embodying a certain attribute and you become legendary for that attribute, gaining you a powerful new ability and a big gorgeous tarot card to place next to your wretch tile to help you feel extra good about your progress. All the while, you must confront various global events that rage across the land. At times no one may visit an inn until all the bandits have been run off. Strange mists may make traveling the edge of the map extra perilous. Dozens of unique events change the game state in some dynamic way — until someone deals with it and claims a huge reward.”

The Odyssey mini-expansion also available through this campaign includes “a dual-layered board that enables you to send your companions on odysseys: excursions away from the party to retrieve all sorts of things and gain you honor.”

And finally, with the recently-added Villages and Hamlets, “if you’re ready for even more customization and replay-ability, your moment has come. The village and hamlet location tiles turn single locations into several, allowing you to add many more location modules to your game at once. When one of these special tiles are drawn, they unlock access to an associated board. Draw locations from the bag to discover what that village contains, or predetermine each village during setup. Careful distribution of basic locations or a chaotic jumble of more unique, fringier modules – however you want to expand your array of options. Village and hamlet boards still allow for individual control of each location as normal, while also introducing a bonus for majority control within each community.” And then there are the new dice with a new mechanic, Performing Attribute Checks.

Comparisons: Vindication is a rather unique game. It’s exceptionally well produced with gorgeous components and a striking board. It’s essentially a grab-bag of mechanics and a point salad of scoring opportunities. And while it’s not a narrative campaign game, it leans on narrative elements and window dressing while maintaining its Euro-style gameplay. On the narrative-themed side of it, it bears resemblances to the likes of Call to Adventure and The City of Kings. Mechanically, with its myriad of scoring options, it reminds me of games like of Flotilla, Pulsar-2849, and Terraforming Mars.

All-In Total: In the continental U.S. you’re looking at $229 for the Green Tier – Ultimate Bundle and $24 for the Village Hamlets Module (the Green Tier only features free shipping) for a total of $253.

Vindication Board Game and Chronicles Expansion completes its Kickstarter on Wednesday, December 30th and tentatively ships in January 2022.