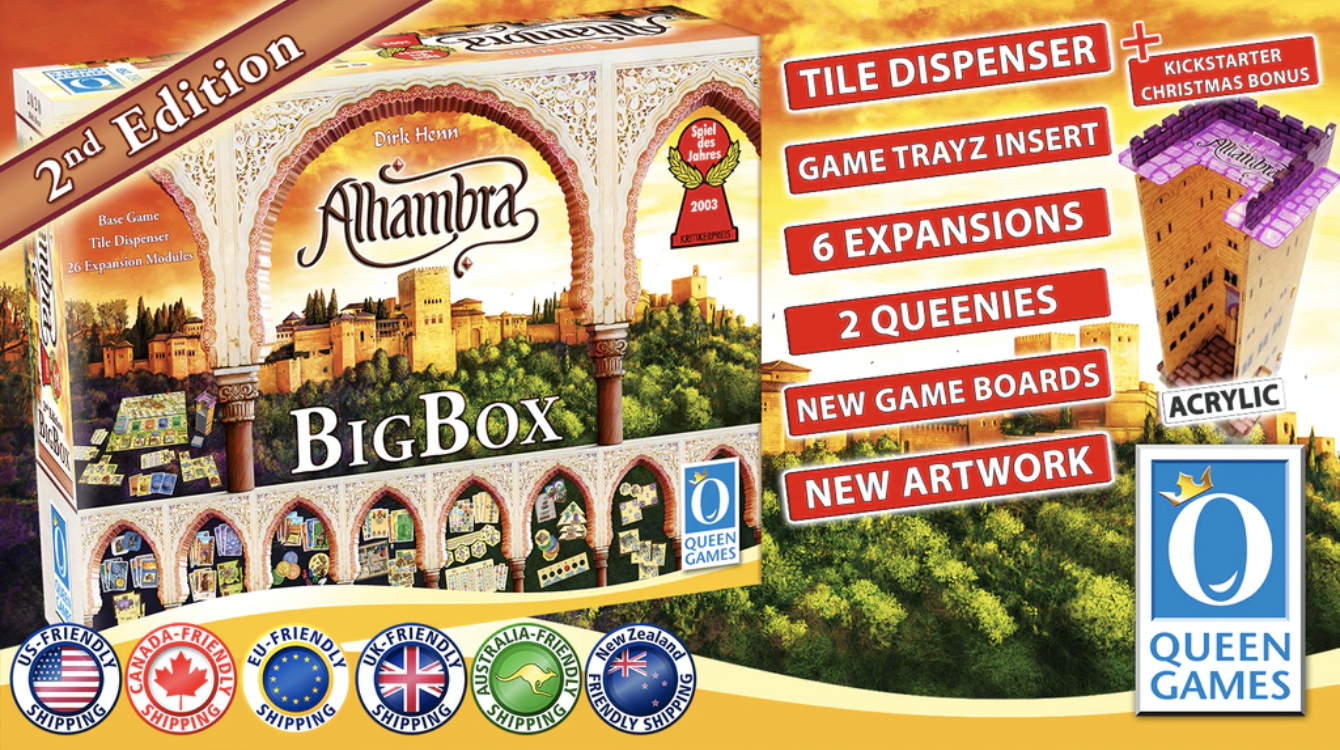 Funding Status: At the time of this posting, Alhambra Big Box 2nd Edition is already fully-funded. Pledges currently total more than 26x the initial funding goal, with 5 days left to go on the campaign!

What It’s About: “Players are acquiring buildings to be placed within their Alhambra complex. Players with the most buildings in each of the six building types in their Alhambra score in each of the scoring phases, and points are awarded for players’ longest external ‘wall’ section within their complex. The new Kickstarter features all new artwork, all 6 expansions, 2 Queenies and Tile Dispenser Tower.”

How It Works: “Play proceeds in a clockwise direction, beginning with the starting player. The player whose turn it is must do one of three things: 1) Take some money, 2) Buy and position a building tile, or 3) Redesign their own Alhambra. After a player’s turn is over any money cards and building tiles which have been removed are replaced with new ones so that there are always 4 of each.”

When taking money, “a player can take any one of the money cards from those lying face-up, or several money cards if they do not add up to more than 5 (the currency does not matter).”

Then “you can either 1) add your new building tile to your Alhambra, or 2) place it on your reserve board. You can have as many building tiles on your reserve board as you want. You must build your Alhambra according to the following: 1) All building tiles must be the same way round as your starting tile (all roofs must point upwards); 2) Adjoining sides must be the same (they must either both have a wall or both not have a wall); 3) You must be able to reach each new building tile “on foot” from the starting tile without crossing a wall and without going off the tiles; 4) Each new tile must be joined to your Alhambra by at least one side (it cannot be joined just at a corner); and 5) You must not leave any “spaces” (an empty area surrounded on all sides by building tiles).”

All-In Total: In the continental U.S. you’re looking at $139 for the Late Bird Christmas Bundle (if they are still available) and $25 in shipping for a total of $164.