Kickstart This! #254: Dollars to Donuts 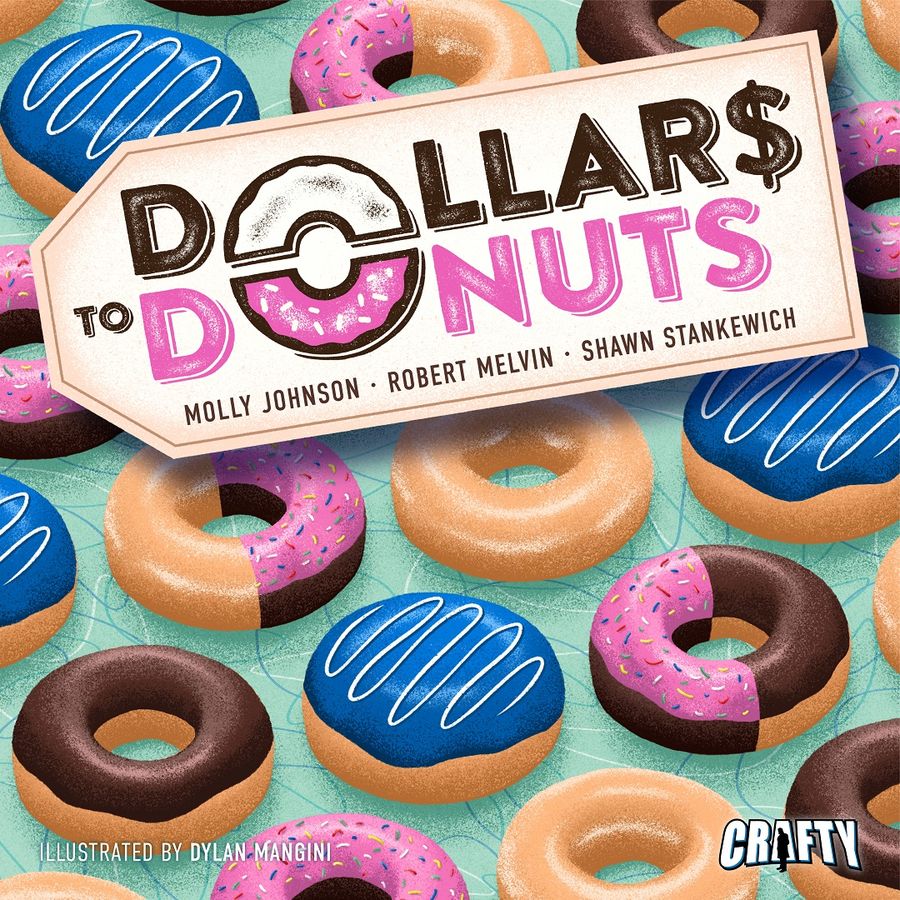 Funding Status: At the time of this posting, Dollars to Donuts is already fully-funded. Pledges currently total almost 1.5x the initial funding goal with 4 days left to go on the campaign!

What It’s About: “A tasty tile-laying game from the award-winning team behind Calico & Point Salad.”

How It Works: “In Dollars to Donuts, players take turns purchasing tiles and placing them onto their player mats to create delicious spreads of donuts. By matching identical halves, you create perfect donuts, which can be served to customers. Mismatched donuts can be sold off for cash to spend on other tiles, single donut halves to place for new matches, and donut holes to plug into empty spots on your player mat.”

On their turn, players take the following steps, in this order:

“Buy: Purchase a Donut Tile from those available on the Specials Board. Spend a number of Dollar Tiles equal to the cost listed at the bottom of a slot and take the tile from that slot. The rightmost tile is always free. Dollar Tiles that you spend are immediately returned to the Cloth Bag.”

“Place Donut Tile: Place the purchased tile into any empty space on your Player Mat, in any orientation. You may even place the tile so some but not all of it extends off the edge of your mat, though this isn’t recommended, especially early in the game. Donut matches made off your Player Mat are not counted for any purpose. Once a tile is placed, it may not be moved in later turns.”

“Serve a Customer (optional): Once per turn, if you have the necessary Victory Tokens, you may serve a single unclaimed customer. Take the Customer Card from the face up market and place it in front of you. Place Victory Tokens from those you have collected on matching spaces on the Customer Card. These donuts are no longer available to you to serve other customers, and they no longer count as victory points at the end of the game (instead, they earn you the same amount plus a bonus as listed on the served Customer Card). Each customer has 3 levels of satisfaction. Contented: 2 donuts on the top line. Delighted: 2 donuts on the top line, and 1 donut on the middle line. Thrilled: 2 donuts on the top line, 1 donut on the middle line, and 1 donut on the bottom line (fully served). A customer must be served from top to bottom. At the end of the game, each customer you’ve served earns you the victory points listed on the bottom line you’ve filled with donuts. Each customer may only be served once, and may only be served when you claim the card. You cannot add more donuts to the card in later rounds to boost the customer’s satisfaction.”

“Fill the Specials Board: Shift all tiles to the right to fill the slot emptied in Step 1. Draw a new Donut Tile to fill the $5 slot.”

“Add New Customer (if needed): If a customer was served, draw a new Customer Card to replace them.”

“Each customer comes from one of 3 neighborhoods (Mt. Timber, The Rose District, or Sunset Heights). Players earn additional victory points for serving sets of customers from different neighborhoods, or the most customers in any neighborhood. The game ends when one or more of the following occurs: When any player completely fills their Player Mat, play continues until the player to the right of the starting player has taken their turn (until all players have taken an equal number of turns). When a player is unable to fill the Specials Board during Step 7 of their turn (because no Donut Tiles remain in the supply). The game ends immediately.”

Comparisons: A few other popular and well-rated games with grid coverage and tile placement include Barenpark, Blokus, The Castles of Burgundy, Cottage Garden, A Feast for Odin, The Isle of Cats, Patchwork, and The Princes of Florence.

All-In Total: In the continental U.S., you’re looking at $39 for Dollars to Donuts + Deluxe Upgrade plus $15 in shipping for a total of $54.

Dollars to Donuts completes its Kickstarter on Monday, August 10th and tentatively ships in May 2021.