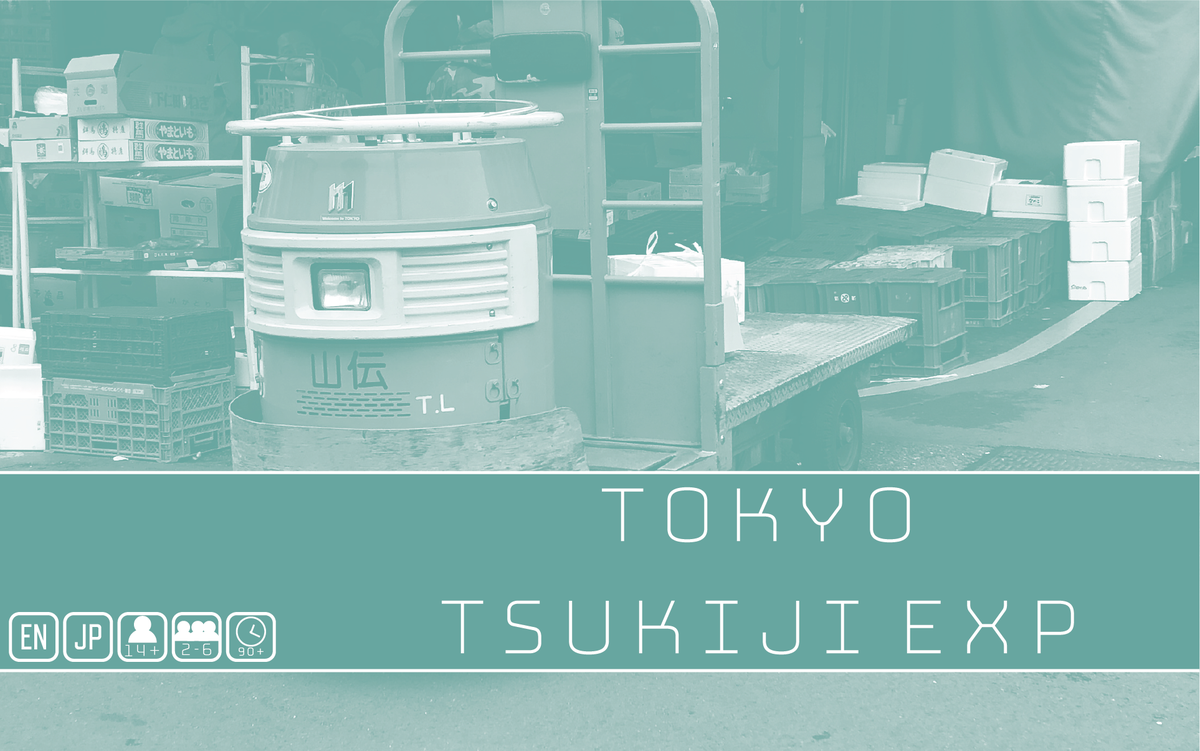 Funding Status: At the time of this posting, Tokyo Series: Expansions! is already fully-funded. In fact, pledges currently total almost 5x the initial funding goal, with 5 days left to go on the campaign!

What It’s About: “In Tokyo Metro, players take on the role of private investors looking to build up stations across Tokyo, speculate on train lines, and comprise a shared network to benefit multiple parties. The core of the game is built around worker placement.”

“In Tokyo Tsukiji Market, players run a fishing company. Through the purchase of fishing licenses, they may take fishing actions to fish and put their catch for sale at a price they choose, which other players may purchase on their turn. The core gameplay centers on an open player-driven economy, with central markets that have limited resources, trading, and unique rules. Each game uses only a fraction of the included game markets, adding endless replayability.”

How It Works: “In each round of Tokyo Metro, play progresses through the following phases, until there are no new action cards to draw during the action card refresh phase. Then the game ends immediately.” During the Action Card Refresh Phase, players “move the bottom action card in each column into its discard pile, shift the remaining cards down, and draw 1 card for each column.” During the Turn Order Phase, players “secretly bid their yen in a closed fist to determine player order.” During the Movement Phase, players “move their meeple up to 2 spaces, beginning with the first player in player order.” During the Action Phase, players “assign available discs to action cards and perform the action until no discs remain, or players pass.” During the Train Phase, “all actively-running trains move 5 spaces and possibly more, triggering station payouts. After game end is triggered, payouts commence by first paying all speculations, and then paying stockholders based on each train line’s income track score, starting with the Ginza line and moving down. Loans must be paid back with 500 yen interest.”

The Osaka Metro Expansion builds on the original unique system design of Tokyo Metro, with a brand new map and set of action cards that can be used for a quicker game.”

In Tokyo Tsukiji Market, “beginning with the start player and continuing clockwise, each player performs 2 actions on their turn. Play then passes to the next player. Play continues until a player has either 5,000 yen, or the value of their resources equals 50 at the beginning of their turn. However, if a player has the most of one condition, but the least in the other, the game continues. When this condition is met, all other players have one final turn before the game ends and scoring is calculated.”

“A player always has exactly 2 actions, which can be performed in any combination of Fishing, Markets, or Purchases. Fishing actions include Undocking, Fishing, and Docking. “All Markets have a cost to enter them, which is indicated by the marking on the left hand side. Markets may require spending actions, resources, or yen to enter. If you see a circle symbol with a number inside of it, the number inside indicates how many actions you must use to enter that particular market. Once you have paid the entry fee to the market, all players with any licenses from that market receive 100 yen from the bank per matching license they own. Note: you may only enter a market if you actually interact and do something while there. After entering the market, you may interact with that market in as many ways as you like.” Market specialties include Mackerel, Squid, Tuna, Red Snapper, Octopus, Eel, and Spider Crab. External Markets include Ships, Rentals, Government, Trading, Bank Aquarium, Used Ships, Auction, and Barter.”

Comparisons: Any of Jordan Draper’s other games make great comparisons, considering they all share his unique, bespoke design style. Import/Export is currently his highest-rated game.

Tokyo Metro is essentially a train game that combines stock holding and network and route building with a host of other mechanics. A few similar games include 1830: Railways and Robber Barons, 1846: The Race for the Midwest, 1889: History of Shikoku Railways, Chicago Express, and Union Pacific. Tokyo Tsukiji Market again features a grab-bag of mechanics, primarily auction/bidding and commodity speculation. A few titles that share those mechanics include Archipelago, Container, Manila, Modern Art, Planet Steam, Sons of Anarchy: Men of Mayhem, and Stockpile.

All-In Total: In the continental U.S., you’re looking at $140 for the All Four Games! pledge plus $10 in shipping for a total of $150. You can, of course, add on more games and extras should you choose to do so.