Kickstart This! #247: Daimyo: Rebirth of the Empire 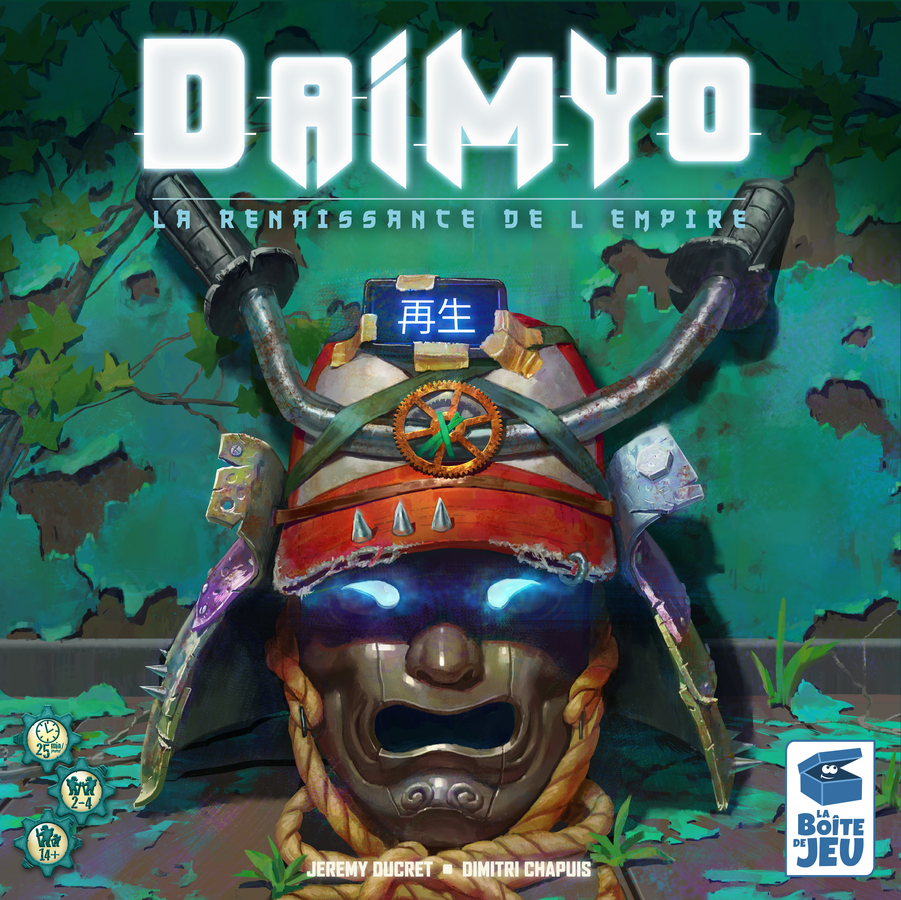 Funding Status: At the time of this posting, Daimyo: Rebirth of the Empire is already fully-funded. Pledges currently total almost 6x the initial funding goal with 5 days left to go on the campaign.

A game of Daimyo is played over 5 rounds, with each round consisting of 3 Phases: the Rolling of the Action Dice, Player Turns, and the End of the Round. When Rolling the Action Dice, “the 1st player rolls and then arranges the dice in columns by value in the middle of the main board where everyone can see them.”

“On Player Turns, the active player chooses an Action die and places it on a Main Action space on their Clan board that is the same color as the chosen die. The player performs the main action associated with the die and possibly one or more bonus actions. When the active player has resolved their main action (and possibly bonus actions), the player to their left takes their turn. When everyone has taken 3 turns (i.e. each player has placed 3 dice), move on to the End of the Round phase.”

When taking a Blue Main Action, the active player receives Help From Villagers: they Increase their Storage Capacity by 1, Draw 1 Hero Card, Activate 1 Villager Tile, and then, if they are the first player to take a Blue Main Action that Round, receive the Mighty Helmet First Player token for the following round.

When taking a Green Main Action, active player either triggers Production, obtaining a Resource from each production site where they have a Governor and/or a Techno-Farm; or the Relic action, twice moving their Scavenger to the No Man’s Land of another island and taking 1 of the 3 Relic tiles available there, placing it in their personal supply. During each of the 2 Relic movements, the active player may also Search No Man’s Land and/or Shop at the Black Market.

Once a player has all 4 pieces of a Relic, they may immediately restore that Relic.

Bonus Actions can be triggered before or after the player’s Main Action, and include utilizing a Hero Ability by playing a Hero Card, Discarding a Hero card to decrease a die on the player’s board by one pip per card discarded, using the player’s Clan Ability if the dice on their Clan board totals 13 or more, and activating a Bonus Action Tile.

At the End of the Round, players determine their Influence for each Island, counting 2 for each Governor and Radio Tower, 1-3 for each Restored Relic, and 1 for each Shadow. The player with the most Influence on each island then earns the Popularity Points depicted on the gold standard, and the player with the second-most Influence earns the PP depicted on the silver standard. Ties are broken by the number of Shadows each player has present. Players then receive Revenue, adjust the Turn Order, and may Hire Heroes.

At the end of the game, players score Popularity Points for their Restored Relics in the following amounts: 3 for 1, 7 for 2, 12 for 3, 18 for 4, 25 for 5, and 33 for 6. For the number of Techno-Farms and Radio Towers Constructed (from 1-4), players earn 1/4/8/13 and 1/2/4/7, respectively. Players total the Hero Points on their cards, with the player with the highest total receiving 10 PP in a 3-4 player game, and the second-most and third-most receiving 5 and 2, respectively. The player holding the Mighty Helmet receives 2 points, and 1 point for each set of 5 resources, not including Gold. The player with the most PP wins the game, with ties broken by the player with the most remaining resources, not including Gold.

What Should I Pledge?:
$80 English Daimyo: include the core game in English, the Miniatures Pack, the Upgrade Pack, and all unlocked stretch goals.

All-In Total: In the continental U.S., you’re looking at $80 for the English Daimyo pledge plus $17 in shipping for a total of $97.

Daimyo: Rebirth of the Empire completes its Kickstarter on Thursday, July 30th and tentatively ships in April 2021.