Kickstart This! #242: Not Alone: Sanctuary 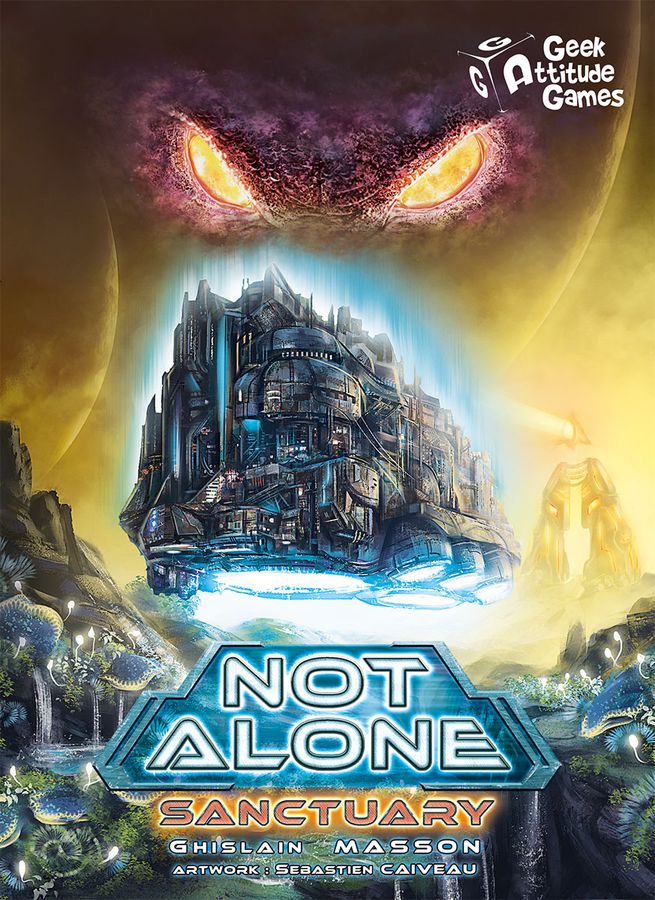 Artist: Sebastien Caiveau (Menara, Not Alone, When I Dream)

Funding Status: At the time of this posting, Not Alone: Sanctuary is already fully-funded. Pledges currently total almost 3x the initial funding goal with 3 days left to go on the campaign.

What It’s About: “An asymmetrical card game in which one player (the Creature) plays against the stranded explorers (the Hunted). The new expansion adds a few elements to the base game, such as a Sanctuary location that gets more powerful the more that you visit it, but which also requires more effort to reach. The creature also gains the ability to mutate. Rescue survivors & fortify your base quickly!”

How It Works:  “If you play as one of the Hunter, you explore Artemia using Place cards. By playing these and your survival cards, your aim is to avoid being hunted down by the Creature until help arrives. If you play as the Creature, your aim is to hunt down the shipwrecked survivors and assimilate them into the planet’s ecosystem. By playing your Hunt cards and activating the powers of Artemia, you repeatedly attack the Hunted to wear down their will and inescapably bind them to the planet.”

“The planet Artemia is made up of 10 different Place cards. Each Place card has a number, a name, and a power that can be activated by the Hunted. The Place cards are horizontally or vertically adjacent. Each Hunted begins the game with the 5 basic Place cards (Lair, Jungle, River, Beach, and Rover) and may explore new places during the game (Swamp, Shelter, Wreck, Source, and Artefact).”

“During the Exploration Phase, the Hunted simultaneously play one Place card each from their hand. Before doing this, they may choose to Resist, forfeiting 1-2 Will counters to take back 2-4 Place cards of their choice. If in doing so, the Hunted loses their third Will counter, they must instead Give Up, regaining all of their discarded cards and Will counters, but moving the Assimilation Counter one space forward.”

“In the Hunting Phase, the Creature places the Creature, Target, and Artemia tokens on various Place cards.”

“In the End-of-Turn Phase, the Hunted discard the Place cards they played during the round, and the Creature retrieves its Hunt Tokens and draws Hunt cards back up to a hand of 3. The Rescue counter moves forward 1 space.”

Comparisons: Not Alone is somewhat unique in its combination of the one-versus-many and deduction genres. The best comparative games out there are probably Fury of Dracula, Letters to Whitechapel, and Whitehall Mystery. Some other one-versus many games include Betrayal at the House on the Hill, Conan, Descent: Journeys in the Dark, HeroQuest, Middle-Earth Quest, Specter Ops, Spyfall, and Star Wars: Imperial Assault. And a few of the higher-rated deduction games (especially those that don’t fall into the party genre like Codenames, Coup, and The Resistance) include Alchemists, Battlestar Galactica: The Board Game, Captain Sonar, Chronicles of Crime, Dead of Winter, Detective: A Modern Crime Board Game, and Sherlock Holmes Consulting Detective.

KS Exclusives
The milestones of the campaign (aka the stretch goals) will not be included in retail editions.

All-In Total: In the continental U.S., you’re looking at $54 for the Exploration pledge plus $15 in shipping for a total of $69.

Not Alone: Sanctuary completes its Kickstarter on Friday, July 17th and tentatively ships in January 2021.