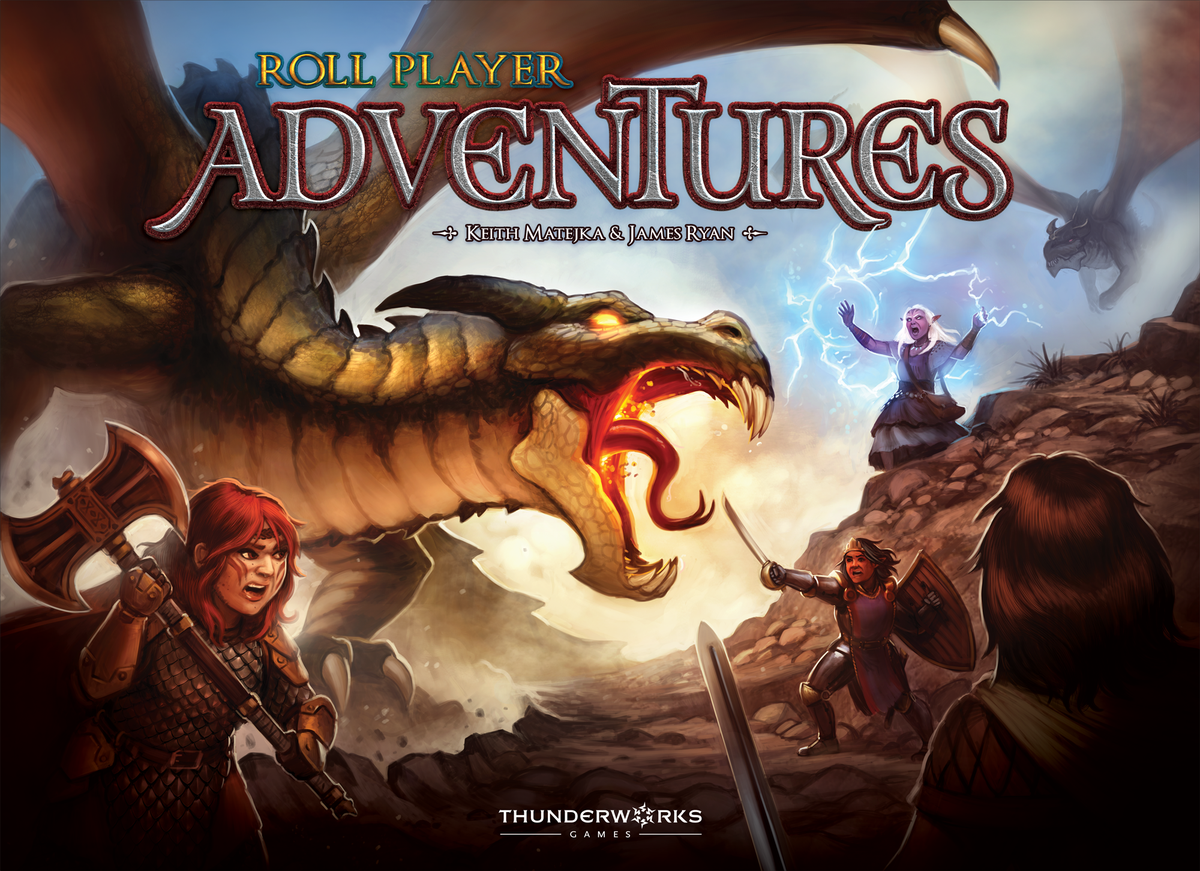 Funding Status: At the time of this posting, Roll Player Adventures is already fully-funded. Pledges currently total more than 5x the initial funding goal with 4 days left to go on the campaign.

What It’s About: “A standalone, co-op, narrative board game where you can import your Roll Player characters and go on adventures,” or play with one of six pre-generated characters.

How It Works:  Players can either import characters they’ve created in Roll Player, or use pre-generated characters included with Roll Player Adventures. Various elements, like the Play Limit, Bonus Play Limit, Starting Gold, Health, and Attribute Scores are determined by the player count and the specific characters being used.

Roll Player Adventures doesn’t feature traditional board game turn structure; there is no set turn order. Instead, much like Dungeons & Dragons or any other RPG, players communicate with each other and decide when to take individual actions. Much of the gameplay is structured around narrative choices; players read an entry in the adventure scenario, and decide together which narrative choice or path to take. Those choices will often then bring board game mechanics (like hand management and dice rolling) into play via skill checks and combat.

“If you lose a combat or fail a skill check, there’s no replaying a scenario or rolling up new characters. You now need to deal with the consequences of your failure, and see how the world changes in response. Even death is a new adventure — with its own 10-encounter storyline.”

“At the end of each adventure, you’ll spend your earned gold and experience points to advance your characters, improving your party for the next adventure. There are 100’s of unique abilities to discover and many ways to specialize.”

Furthermore, the Kickstarter campaign includes 12 different scenario books, and “Adventures 1-10 contain a continuous story and are meant to be played in order, followed by the Finale. The sidequest adventure exists independently of the narrative contained in the campaign and can be played anytime after Adventure 1: Battle at Blacklake, including after completing the campaign.”

Comparisons: Perhaps the closest comparison is Dice Throne Adventures, which is still in producton following its very successful Kickstarter. Dice Throne is a dice-chucker with dice mitigation, like King of Tokyo, whereas Roll Player is a character creation game featuring dice placement. Both Dice Throne Adventures and Roll Player Adventures start with their pre-existing board game franchise and evolve their IP with a dungeon-crawling campaign game featuring game mechanics and gameplay different from those of their original games. Garphill Games also did a Kickstarter for Epilogues of the North Sea, an old school paper-and-pencil RPG spawned from their Explorers, Raiders, and Shipwrights games. Roll Player Adventures lands somewhere in the middle. It utilizes hand management, dice rolling, and dice mitigation, and does feature a game board, but the game is, in the end, more of an RPG at-heart featuring additional mechanics versus a full-on dungeon crawling board game in the vein of Dice Throne Adventures. Dungeons & Dragons itself, while not technically a board game, is a fairly good comparison. A few other cooperative dungeon-crawlers that lean heavily into narrative choice and exploration include Folklore: The Affliction, Legacy of Dragonholt, and Tainted Grail: The Fall of Avalon.

Add-Ons:
None listed, though it’s possible many of the Roll Player products featured in the All-In could also show up in the Pledge Manager as individual add-ons.

KS Exclusives
None listed, though I don’t believe the various Promo Items are available via retail.