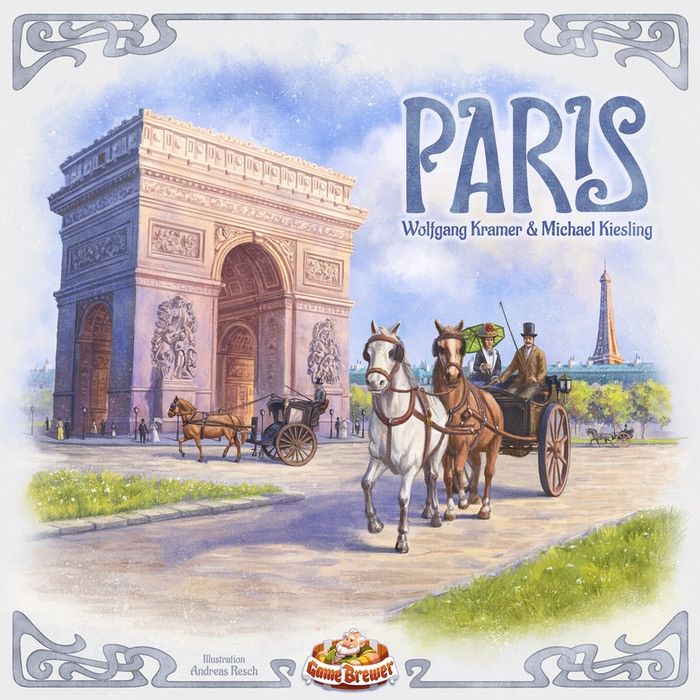 Funding Status:  At the time of this posting, Paris is already fully-funded. Pledges currently total more than 1.5x the initial funding goal, with a little less than 7 days to go on the campaign.

What It’s About:  “Take on the role of wealthy real estate investors in the Paris of the 1900s; purchase some of these magnificent Parisian buildings in order to make a profit, and invest in the development and upkeep of some of Paris’ most iconic monuments and landmarks.”

How It Works:   “Starting with the Starting Player and continuing play clockwise, each player must perform the following 2 game steps: 1) Place a Building on the Game Board (as long as they are available), and 2) Perform an Action.”

When Placing a Building, the active player “starts their turn by drawing the top Building Tile from one of the draw piles and placing it on the matching Building space, with the Building value and District as depicted on the Tile. If all the draw piles of Building Tiles are empty, skip this step for the rest of the game.”

Then, when Performing an Action, the active player must perform 1 of the following 3 actions: 1) Place a Key on a Bank or on the Arc de Triomphe, 2) Move a Key to acquire a Building, or 3) Take an End Game Tile (only allowed once the piles of Building Tiles are empty and players are no longer Placing Buildings).

To Place a Key, the active player takes one of their Keys from behind their Player Screen and places it on the Bank of one of the 6 Districts or on the Arc de Triomphe. If they place their Key on a Bank, they’ll take the indicated number of Francs from the general supply and place them behind their Player Screen (Players can only have one Key on any of the structures at any given time, and Keys can not be placed on Buildings or Landmarks).

Additionally, “as soon as a District has a total of 4 Keyes on Buildings and Landmarks (not including the Bank) the active player may immediately place one of the available VP Tiles on an available VP Tile spot in a District of their choice. These Tiles will offer bonus VP at the end of the game to the players who occupy the Buildings and Landmarks with the highest values in that District.”

To Take an End Game Tile, “instead of placing or moving a Key, and only after all of the Building Tiles have been exchausted from the Supply, the active player may search through the pile of End Game Tiles and take 1 of their choice. They may activate a collected End Game Tile immediately or later in the game, at any moment during one of their turns. When they do, they immediately obtain the advantage and discard the Tile. The pile of End Game Tiles is kept facedown. Although players may search through the pile when they choose this action, it is kept a secret what Tiles are still available.”

“When a player takes the last End Game Tile, players continue playing the current round as normal and then play one final round.” Then, during End Game Scoring, the player that owns Bonus Tile 27 scores 1 VP for each Franc they own. “Players may score additional VP in each District with a VP Tile, if they have acquired at least one Building or Landmark in that District. Players add up the value of all the Buildings and Landmarks with their Keys on it. In each District, players with the highest, 2nd highest, and 3rd highest total value receive the highest, 2nd highest, and 3rd highest VP as depicted on the VP tile in that District. The 4th player does not receive any VP. Ties are broken in favor of the player with the highest value Building in the District.” The player with the most total VP points is the winner of the game, with ties broken by the player with the most Francs, and then by the player with the Buildings and Landmarks across the entire board with the highest total value.

Comparisons: Kiesling and Kramer have another game with a circular board all about building (this time wall pieces instead of buildings) called Porta Nigra. Some of their other best-rated collaborations include Coal Baron, Maharaja: The Game of Palace Building in India, Mexica, The Palaces of Carrara, Tikal, and Torres.

Paris completes its Kickstarter on Friday, April 3rd and tentatively ships in October 2020.