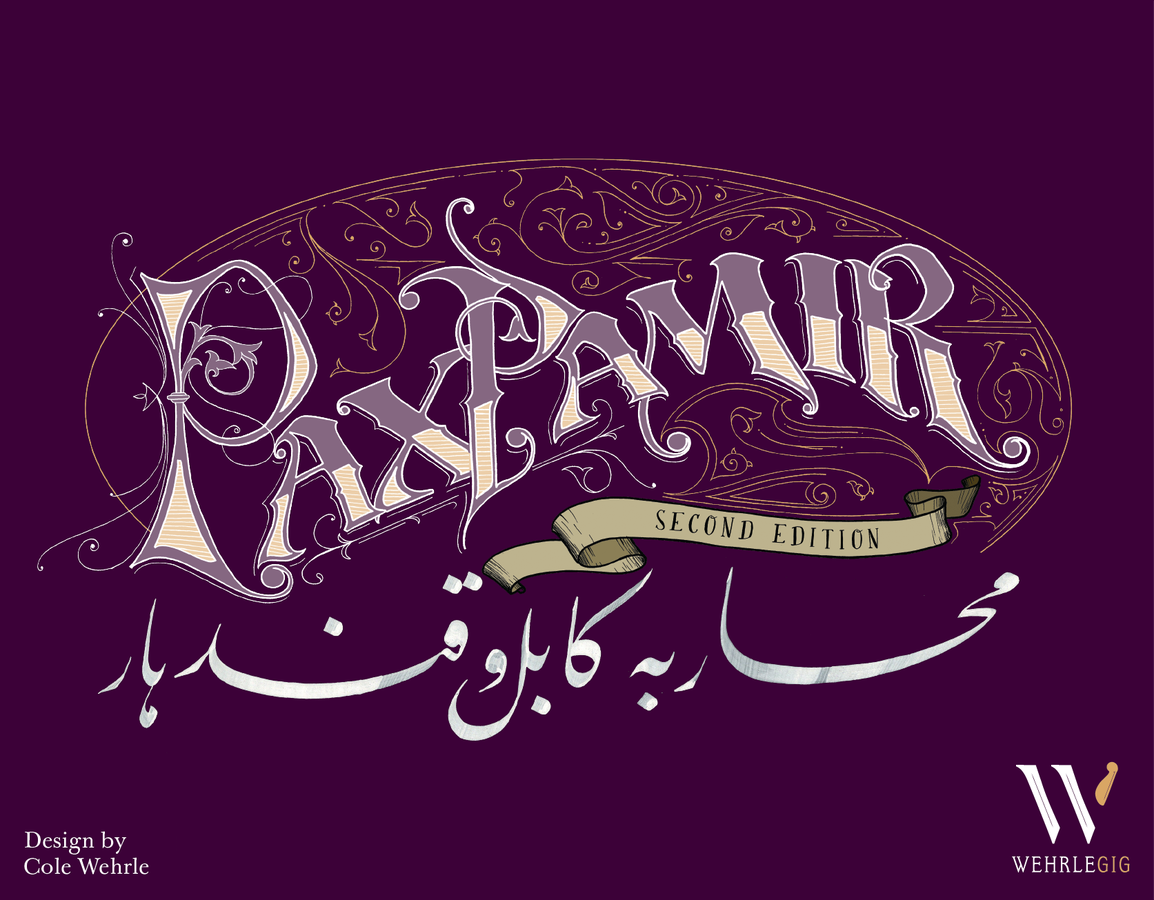 Funding Status:  At the time of this posting, Pax Pamir Reprint is already fully-funded. In fact, pledges currently total more than 35x the initial funding goal, with less than 2 days to go on the campaign!

What It’s About:  A re-printing of Cole Wehrle’s top-notch redesign and 2nd edition of Pax Pamir, a tableau-builder where “players assume the role of nineteenth century Afghan leaders, attempting to forge a new state after the collapse of the Durrani Empire” amidst shifting allegiances between the British, Russian, and Afghan forces.

How It Works:   Pax Pamir occurs over a series of turns. Each turn, the active player perform up to two actions: Purchasing from the market (paying the card’s costs, paying coins for each card to the left of the chosen card, and collecting any coins on the card), and Playing a card from their hand onto either side of their tableau. When playing a card, the active player will also resolve the various iconography on the card, which could lead to them 1) placing a Road on the map, 2) placing an Army on the map, 3) taking 2 rupees from the bank, 4) placing a Spy cylinder on an opponent’s card, 5) placing a Tribe cylinder in a region, or 6) moving the Favored Suit indicator. Players can take either action twice, each action once, a single action, or no action at all.

There are also Bonus Actions a player may take on their turn that don’t count against their two- main action limit. Many cards have additional actions on them; players can take up to 1 action per card on their turn, if the card matches the currently Favored Suit. These actions include Taxing, Gifting, Building, Moving, Betraying, and Battling.

When Taxing, the active player takes a sum of rupees up to the rank of the card from other players who have court cards associated with a region they rule. This sum can be spread across multiple players.

When Gifting, the active player places a cylinder on a gift space of their card, paying 2, 4 or 6 rupees, depending on the price of the space. Each cylinder will gain them 1 influence in their current coalition; but gifts are lost whenever the player changes loyalty.

When Building, players place up to 3 armies and roads in or along any region they rule, playing 2 rupees for each of the 3 units placed.

When Moving, the active player can either move an army on the map or a spy across cards in the collective players’ tableaus, up to a total number of spaces of the rank of the card.

When Betraying, the active player pays 2 rupees to have one of their Spies “kill” the card underneath it. The active player then receives the killed card as a reward, tucking it behind their loyalty dial. However, if the card prize is different from their current loyalty, the player must switch their loyalty to match, which also means discarding any gifts, prizes, and patriots.

When Battling, the active player chooses a card in their tableau and removes any combination of tribes, spies, roads, and armies in that region (or on that court card) up to the rank of their card. Three caveats: the active player can not remove their own units, they can never remove more units that the number of units they have in that region or on that card, and they can not remove tribes belonging to a player who shares their loyalty.

Comparisons: Pax Pamir’s card play and tableau-building, combined with shifting allegiances between 3 different non-player armies, makes it somewhat unique. Cole Wehrle’s other popular designs are John Company and Root. Phil & Matt Eklund have designed some similar games that also use the Pax moniker: Pax Emancipation (set around the end of slavery in England), Pax Porfiriana (set around the 1910 Mexican Revolution), Pax Renaissance (set during the Italian Renaissance), and Pax Transhumanity (set during a non-dystopian future).

What Should I Pledge?:
$5 Replacement Ruler Tokens: 6 wooden Ruler Tokens with silk-screen printing.
$15 Metal Coins: the Metal Coins and a Cloth Bag.
$70 Pax Pamir: Second Edition: a copy of the second edition of Pax Pamir, Metal Coins not included.

KS Exclusives
None listed, but it doesn’t seem as though the Metal Coins or Replacement Ruler Tokens would be included in any potential retail editions, since they don’t come with the game itself. It’s unclear if retailers will have the ability to order those outside of this Kickstarter campaign.