Kickstart This! #19: Eschaton – The Unholy Reprinting 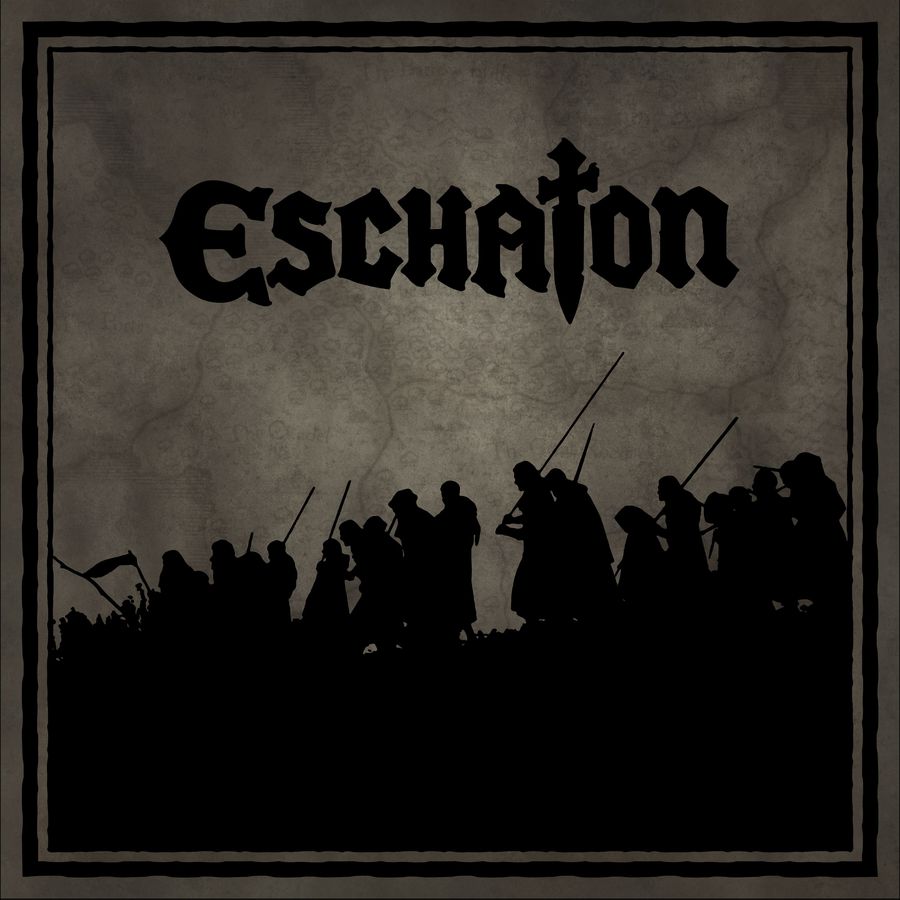 Funding Status: At the time of this posting, Eschaton – The Unholy Reprinting is already fully-funded.  In fact, pledges currently total more than 3.5x the initial funding goal.

How It Works:  The Event Deck consists of 4 piles of 3 cards each. The Armageddon card is included in the 4th pile, and as each pile is shuffled separately before combining them, the Armageddon card will end up as the 10th-12th card, which means the world will end when that Event card is revealed. Until then, players begin with a personal starting deck of 7 cards. As with most deck builders, players draw a certain numbers of cards at the start of each turn, in this case 5, and can then use those cards to buy more powerful cards on their turn, here based on the Divination points in their current hand. But they’ll also be able to use cards to add and move their cubes on the map in a bid for area control, as well as to remove other players’ cubes, using Aggression icons in their current hand. Players can also use Zeal points to draw extra cards into their hands from their personal decks or Influence points to activate their card abilities. End game scoring is based on items players may have acquired during play, including Omens, Thralls, Fiends, and various Relics; as well as points for area control in each territory.

Comparisons: The map, the colored cubes, and the area control mechanic remind me quite a bit of El Grande. Then there’s the deck building mechanic. For other popular deck builders, I refer you to games like Hero/Star Realms, Thunderstone Quest, Ascension, Aeon’s End, Dominion, Dragonfire, the Legendary series (including Legendary: A Marvel Deck Building Game), and Harry Potter: Hogwarts Battle. Other games that aren’t exclusively deck builders but use deck building as a primary mechanic along with other mechanics include the Clank! series and Great Western Trail.

What Should I Pledge?:
$6 Dark One Round Marker: yup, all you’re getting is a Round Marker.
$19 Cloth Map: again, all you’re getting is a Round Marker (these are pledge levels for add-ons for people who already have the game and don’t need or want to repurchase the game itself to be able to purchase the add-ons).
$20 Disciple’s Upgrade: this is all the new stuff previous owners likely don’t have- the updated map, new rules reference cards & tokens, tray, rulebook, Cultists, Arcana, and playmat.
$59 Eschaton – First to the Cause: there are still about 20 of these left. It’s the base game plus and the Badge of the Dark One, an enamel pin.
$60 Eschaton: the base game.
$85 Eschaton & Sigils of Ruin: the base game plus its expansion, Sigils of Ruin.
$199 Unholiest Edition Game Box: there’s only a couple of these left, and it doesn’t include a copy of the game. It’s just the Wood Game Box & Dividers and the Wood Game Tokens and cloth bags. This is for people who already own the game.
$299 Eschaton Deluxe Edition: this includes all of the stuff from the previous pledge level, plus the base game and the Sigils of Ruin expansion, plus the Dark One Round Marker, the Cloth Map, and Badge of the Dark One enamel pin.

All-In Total: In the continental U.S., you’re looking at $299 for the Deluxe Edition, plus $36 for sleeves and $12 in shipping, for a total of $347. If you don’t need or want the expensive wooden box, try the $85 pledge level for the core game and the Sigils of Ruin expansion; assuming you don’t want any of the add-ons, including sleeves, you’re looking at $97 including shipping.

Eschaton – The Unholy Reprinting completes its Kickstarter on Thursday, May 30th and tentatively ships in August 2019.