Kickstart This! #168: Foundations of Rome 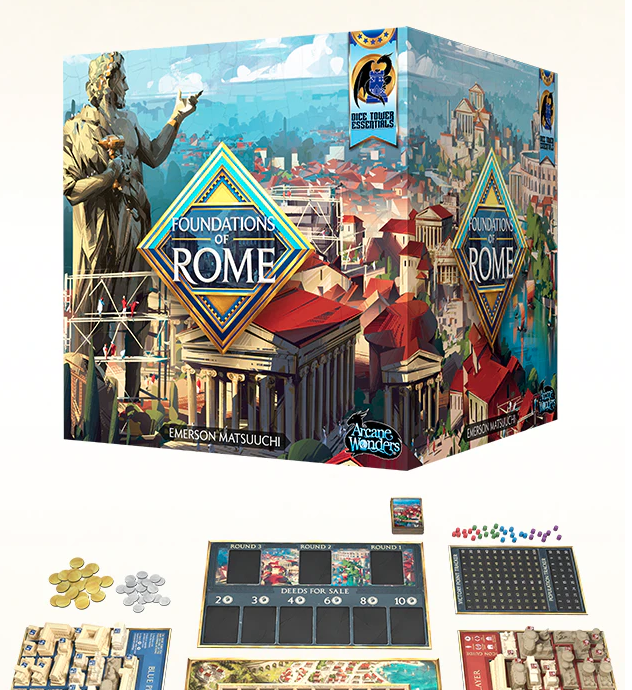 Funding Status:  At the time of this posting, Foundations of Rome is already fully-funded. In fact, pledges currently total more than 13x the initial funding goal, with 6 days left to go on the campaign!

What It’s About:  “Over three rounds of play, you will compete to be the greatest builder in Rome by purchasing empty Lots in strategic patterns and using them to construct your buildings. More complex buildings are hard to construct, but they bring their builder even greater glory.”

How It Works: “During a round, the players take turns, starting with the first player and going clockwise. The round continues until the stack of Deed cards for that round (on the Deed board) runs out. At the end of the round, players will score Victory points, recorded on the Victory Point Tracker. After the third round scoring is complete, the game ends.”

On their turn, the active player takes one of the following actions: Taking Income, Buying a Deed, or Constructing a Building.

When Taking Income, the active player receives 5 coins from the bank, plus a number of coins equal to the listed amounts on all of their constructed commercial buildings on the City board.

To Buy a Deed (and this may only be done if the active player still has Ownership tokens, meaning they aren’t already all distributed out on the City board): “1) Pay the number of coins shown above the Deed you wish to purchase (to the bank); 2) Take the Deed card from the Deed board and add it to your Deed card pile; 3) Slide the other Deed cards to the left to fill the empty space, if needed; 4) Fill the last spot by turning over the top Deed card from the deck for the current round; 5) Place one of your Ownership tokens on the matching Lot of the City board.”

Comparisons:  Essentially, Foundations of Rome is a polyomino game, where players trying to slot differently shaped pieces into a grid. There have been a great many successful games of this sub-genre in the last few years: Barenpark, Cottage Garden, Indian Summer, The Isle of Cats, Patchwork, and Spring Meadow, to name but a few. What makes Foundations different is the additional mechanic of a Deed Market, as well as the use of miniatures instead of simple cardboard tiles… and the subsequent heavy price tag attached to the game. The current Kickstarter campaign even offers an option to have a wash applied to the building miniatures for an additional $50! Foundations is being featured here because the gameplay is so attractive and the theme is compelling, but buyer beware, the all-in for this Kickstarter could have you paying more than 10x (in the case of Patchwork) what you’ll pay for another very similar, very solid entry in the genre.

All-In Total: In the continental U.S., you’re currently looking at (at the time of this posting) $159 for the Emperor Pledge, $5 for the First Player Metal Statue, $10 for the Gardens of Ceres Solo Module, $50 for the Full Game Wash, $79 for the Game Toppers Neoprene mat, plus $25 in estimated shipping for a total of $328.

Foundations of Rome completes its Kickstarter on Thursday, February 6th and tentatively ships in January 2021.