Kickstart This! #167: Shiver Me Timbers 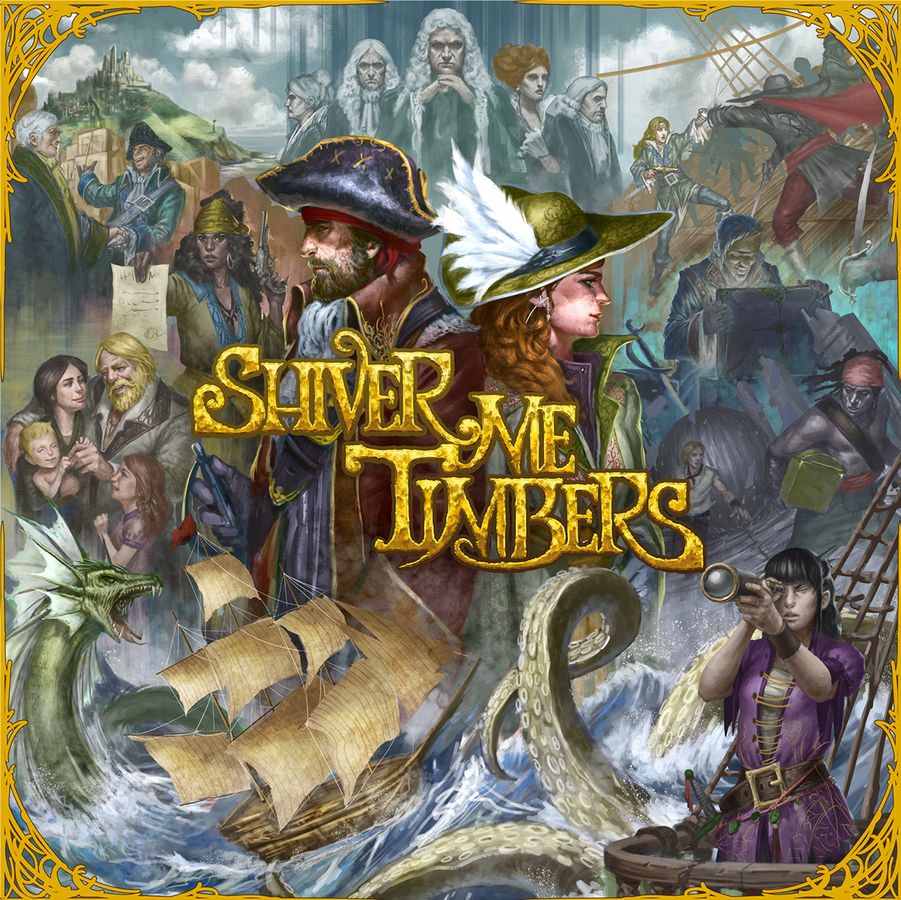 Funding Status:  At the time of this posting, Shiver Me Timbers is already fully-funded. Pledges currently total more than 2x the initial funding goal, with 6 days left to go on the campaign.

What It’s About:  “A strategic sandbox game with modular miniatures for 2 to 4 players.  Fight enemy ships, raid fortresses, complete missions for the king, hunt for lost treasures, rescue kidnapped relatives, and face off against legendary monsters.”

How It Works: “The end game is triggered when a player acomplishes the second to last Life goal. Finish the round and compare your victory point totals.”

“Shiver me Timbers is played over several rounds.  Starting with the first player, each of you will take three of the following actions during your turn, and you can select the same action multiple times: Travel, Upgrade Ship, Trade, Hire Pirates/Crew or Learn Rituals, Go on a Treasure Hunt, Accept Missions, Attack Ships and Raid Fortresses, and Fight Monsters. After the last player has taken their turn, the round ends. When the round ends, reveal a new Wind Marker, place new Merchant Markers on any empty and unoccupied ship spots on the sea routes, turn any active “Yellow Jack“ Markers to their inactive side to indicate the plague is over and the island is immune, and start the next round.”

When Traveling, add up your ship’s current Speed and the current wind force to see how many spaces you can move.

In probably the coolest element of the game, Upgrading your modular Ship involves physically changing it as you pay to increase 1 of 3 statistics. “You can upgrade your Speed, your Strength, and your Size on any island. Each additional point will take 1 action and cost some gold. Each upgrade can be increased to a maximum level of 7. If you want to upgrade several attributes, or increase any attribute by more than 1, you have to take several actions.” This means that each upgrade point must be performed separately; also, each upgrade costs 100x the level in gold. So Upgrading Speed from level 3 to 5 will take 2 actions– one action and 400 gold to upgrade from level 3 to level 4, and a second action and an additional 500 gold to upgrade from level 4 to level 5. “Track upgrades on your miniature by adding sails, cannons and cargo units (with the resources disc rotated on black to indicate the unit is empty). Once bought, upgrades cannot be resold.”

“On The Bay, you can hire additional crew members to help you with your tasks. Take the action Hire Pirates/Crew to choose one card from the Crew Deck and put it into your hand. On Isla Oscura, there’s a helpful shaman willing to teach you his rituals. Take the action Learn Ritual to choose one card from the Ritual Deck and put it into your hand. Taking the cards is free. But when you play them, you have to pay the amount indicated on the Crew Cards, or sacrifice (discard) the resources indicated on the ritual. At any time, you can hold a maximum of three Crew Cards and three Ritual Cards. If you want to collect a fourth card, you have to play a card first, or discard it as a free action.”

“When Searching for Treasure, you need to combine two actions: Scouting  for hints pointing to treasures, and the Treasure Hunt itself to raise them. The Scouting action is available on any of the six islands. When Scouting, look at the top three cards of the Treasure Deck. Place one of the cards in your hand and return the other two to the bottom of the Treasure Deck. At any time, you can have a maximum of three Treasure Cards between your hand and your Treasure Track. If you already have 3 Treasure Cards, you cannot Scout until you discard one of your existing Treasure Cards. To follow your Scouts’ hints and raise a treasure, travel to the island location indicated on the Treasure Card.  Reveal the Treasure Card and place it on your Treasure Track.  Place one of your Colored Hunt Markers on the first (red) space of the track and the White Marker on the final space indicated on the card. Then, start digging. Whenever you take the Treasure Hunt action, you can move your Search Marker forward the exact number of spaces as your current Strength. If your Hunt Marker ends the action on a green or white die, your crew has stumbled on something valuable. Roll the green or white die and gain any reward shown. Most Treasure Cards show special resources which you can donate to the locals to gain additonal information about the treasure location. Discard these resources as a free action to move your Marker the indicated number of spaces forward.  As soon as you reach the space with the White Marker, the treasure has been raised. You can only have one card on your Treasure Hunt Track at any time. If you want to raise a different treasure, you must move the active card back to your hand (and would have to restart on the starting spot later on). If you leave the island during the Treasure Hunt, simply leave the card and the markers on the track. You can pick up the search whenever you return to the island. If you raise a treasure, place it on your ship. If a Treasure Card contains a one-time bonus (marked with the Shovel icon), take the indicated bonus right away.  If a Treasure Card contains a lasting bonus (marked with the Windrose icon), you will profit from this bonus for as long as the treasure remains on your ship. Every Treasure Card also contains a price tag. This is the amout you would receive if you decided to sell the treasure with a trade action. Watch out– as long as a treasure is on your ship, it can be stolen by other players. But you can also take a free action and hide the treasure in your chest to protect it.”

“There are three kinds of combat: Gun Fights damage and weaken slow ships on sea routes. Boarding Attacks capture and plunder other players’ ships or merchant ships on sea routes. But watch out, if you lose, you may suffer painful repercussions. Raids on fortresses allow you to plunder their coffers.”

“You can hunt down two dangerous monsters: the Sea Serpent and the Kraken. To face the Sea Serpent, you have to hire a First Mate on The Bay. Once you play him, he will lure the Sea Serpent into the nearby waters. To face the Kraken, you have to learn and to perform the ritual which calls him on Isla Oscura. Once you have called one of the monsters, take the corresponding tile and place it on the Special space of one of your long sea routes. In most cases, you will choose the space you are currently occupying. As long as the monster is alive, the ability of the Special field cannot be used. You may not choose spaces which are already occupied by a monster tile. Ships currently on the space remain there and can travel on or fight the monster during their next turn. To fight the monster, place your Hunt Marker on the starting space. Similarly to the Treasure Hunts, you can take the action Monster Hunt to move your Hunt Marker forward. Check in which segment (Speed, Strength, Size) the marker is currently situated and move as many spaces as your value in this category.”

“As soon as you reach one of the Life Goals, mark it with one of your tokens – even if it‘s not one of your chosen Secret Goals. If you are the first player to achieve this goal, place your token on the spot marked with ’10.’ If another player already claimed the top spot, place your token on the spot marked with ‘5.’ You can achieve any number of Life Goals. You don‘t have to reveal if those are among your chosen Secret Goals or not. Each goal can be achieved by any number of players. If several players achieve the same goal in the same action, the active player places his marker first. As soon as the second to last goal is achieved, the end game is triggered. Players finish the round and tally their victory points.”

“Count all victory points (wax seals) on your ship and in your chest, including points for defeated ships, monsters & fortresses; points for treasures and missions; and points for rescued family members. In addition, you score 1 point for every 1,000 Gold in your chest or on your ship; any points for life goals you achieved (10 points if you were the first player to reach the goal, 5 points otherwise); and 5 bonus points for every Secret Goal you managed to achieve. The player who scores the most points wins.”

Comparisons:  Shiver Me Timbers is both a sandbox game (where you can do a lot of different things, and the choice of paths to pursue is your own) and Eurogame. There is some contention as to what actually constitutes a sandbox or open world game in board gaming, because there are usually still goals the player is trying to achieve, even if they have some agency in choosing those goals. Board games never seem to be quite as sandboxy as video games. Nevertheless, some of the better examples of this genre within the world of board gaming include Feudum, Mage Knight, Merchants & Marauders, Tales of the Arabian Knights, Twilight Imperium, and Western Legends. But what really makes Shiver Me Timbers unique are the modular ships!

What Should I Pledge?:
$77 First Mate: a copy of the base game, all unlocked stretch goals, and access to the print-and-play, desktop wallpaper pack, and pledge manager.
$99 Captain: everything in the First Mate pledge level, plus 4 Cardboard Chests and 75 metal coins.

Add-Ons:
$17 Fifth Player Standard: the 5th player expansion with 1 modular ship, 1 large player board, 1 cloth bag, punchboards and wooden markers, treasure track, all in a Sturdy Box.
$21 Fifth Player Deluxe: everything in the Fifth Player Standard, plus 1 Cardboard Chest and 15 metal coins (to bring the expansion in line with the Captain pledge-level components)

Shiver Me Timbers completes its Kickstarter on Thursday, February 6th and tentatively ships in March 2021.