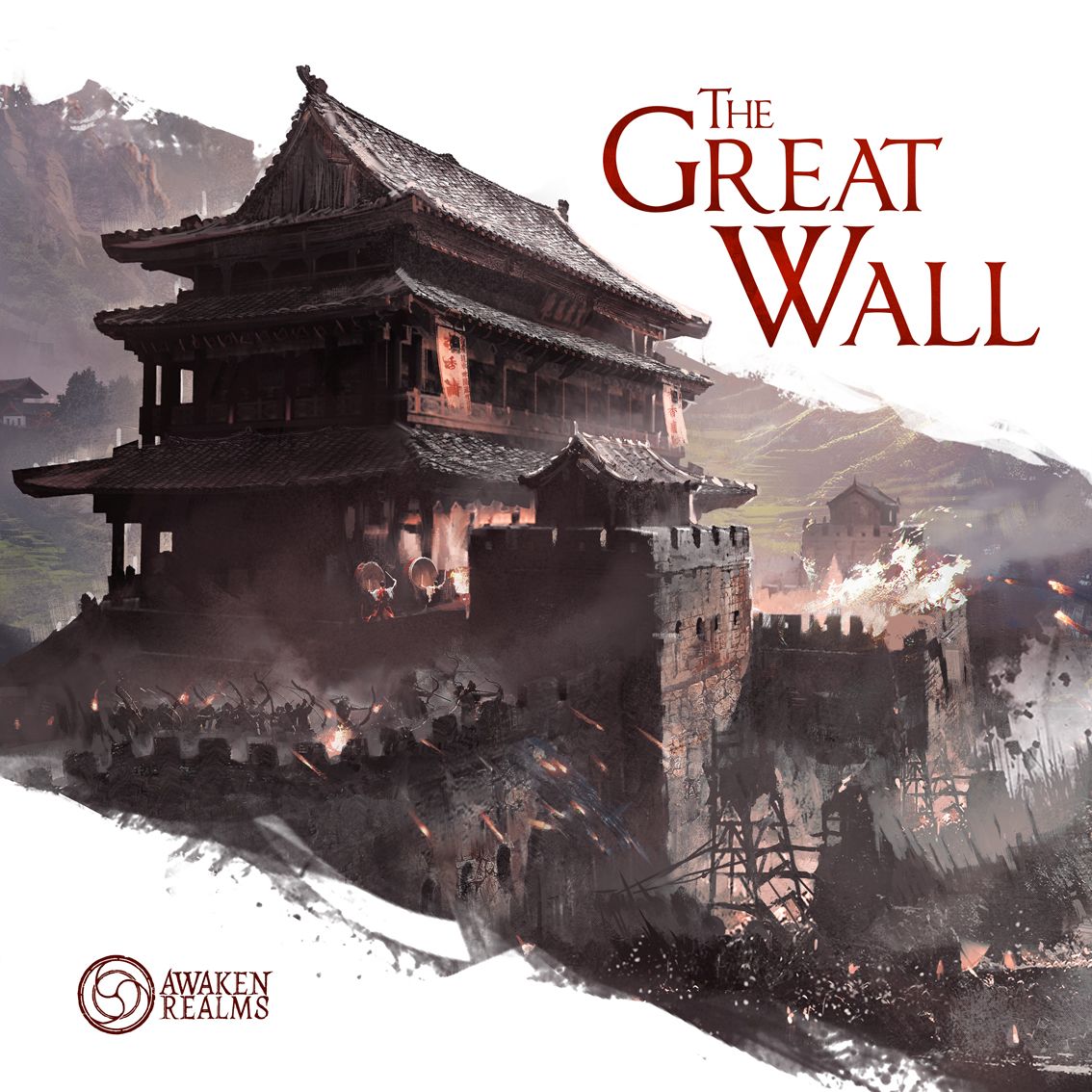 Artist: Piotr Gacek (Lords of Hellas, Nemesis, Tainted Grail: The Fall of Avalon, This War of Mine: The Board Game)

Publisher: Awaken Realms (Lords of Hellas, Nemesis, Tainted Grail: The Fall of Avalon, This War of Mine: The Board Game)

Funding Status: At the time of this posting, The Great Wall is already fully-funded. In fact, pledges currently total more than 26x the initial funding goal with 5 days left to go on the campaign!

What It’s About: A new asymmetric worker / soldier placement game with engine building, featuring a constantly attacking AI (the Mongolian Horde) that players will sometimes need to cooperate with each other to defeat.

How It Works: Although The Great Wall includes separate solo and 2-player rules, the game is intended to be played with 3-5 players. Each game is played over 3 Years (or Rounds), and each Year is divided into 4 Seasons; Autum, Winter, Spring, and Summer.

During the Autumn Production Season, players take Income from their General Production (as printed on their General’s card) and Overseer Production (as determined by their Overseers’ levels). Then players will draw Horde cards equal to the number of players, filling the Horde slots from left to right.

During the Winter Command Season, each player chooses one of their Command cards, placing it face-down in front of them, and then all players reveal their Command cards simultaneously. Command cards are then placed on the Initiative Track in an order determined by the Tea Track, and then resolved in order. Players repeat the process with a second selection of Command cards. Each time a Command card is activated, the upper effect is resolved for the active player, then the lower effect is resolved for the other players, and an associated Location is evaluated. When evaluating Location Actions, each player with Clerks present resolves the effect in Tea Track order, and players who have Recruited at least 1 Soldier may also buy or upgrade their Overseer; finally, all Clerks are removed from the Location and returned to their respective pools.

Location Actions include: Barracks (for each of their Clerks present, may discard 2 Wood and 2 Meditation to place an Archer on a free slot of a Wall Section, discard 2 Wood and 2 Stone to place a Spearman behind one of the Wall Sections, or discard 4 Gold to replace one of their Archers or Spearmen on/behind a Wall Section with a Horseman), Academy (each player with at least one Clerk in the Academy draws as many Tactic cards as the total number of Clerks in the Academy), Teahouse (each player moves their Player token 1 space up the Tea Track for each of their Clerks present), War Room (each player moves their Player token 1 space up on the Leadership Track for each of their Clerks present), Postmaster Office (discard 2 Meditation to discard 2 of the leftmost Advisors on the Postmaster Office board, replacing them with 2 new Advisors, then may pay 3-5 Gold to buy an Advisor or Clerk in their color from the corresponding column), Messengers Office (move up to 2 of their Soldiers from one Wall Section to another for each Clerk present), Engineer Workshop (build up to 1 Fortification paying 2 of any Resource except Meditation and receiving 2 Honor), Fortifications (whenever a player builds a Fortification, they place a corresponding component in a dedicated space in front of a chosen Wall Section, giving a 2 Defense to the Wall Section for 1 Battle; each Wall Section may have a max of 3 Fortifications built, but all Fortifications are discarded at the end of every Spring Battle Season).

During the Summer End Season, players choose whether to Donate Resources or not, and then players donating at least 1 Resource receive 3-12 Honor depending on the number of Resources donated compared with other players and their position on the Tea Track. Players then build Wall Sections depending on the number of total Resources donated. After the Summer of the third year, players score additional Honor for each of the 3 active Artifacts in play, and then the player with the most total Honor wins the game, with ties broken by players’ positions on the Tea track.

Comparisons: Essentially, The Great Wall is a tower defense game with worker placement and some territory-building. Castle Panic, Cloudspire, Stronghold, and Village Attacks are all well-regarded tower defense games, and worker placement games include the likes of Caverna, A Feast for Odin, Lords of Waterdeep, and Viticulture. Xenoshyft: Dreamire and Xenoshyft: Onslaught are two of the rare games that combine the two. Also, A Game of Thrones: The Board Game, Kingsburg and Troyes all incorporate a similar mechanic where players in a competitive game must somewhat collectively contend with an attacking wave of enemies at the beginning or end of each round.

KS Exclusives:
None listed, except for the fact that the Core Box via the Kickstarter also includes the stretch goals, Genghis Khan Expansion, and 5th Player Expansion. Those extras will not be included in retail editions.

The Great Wall completes its Kickstarter on Tuesday, December 17th and tentatively ships in October 2020.