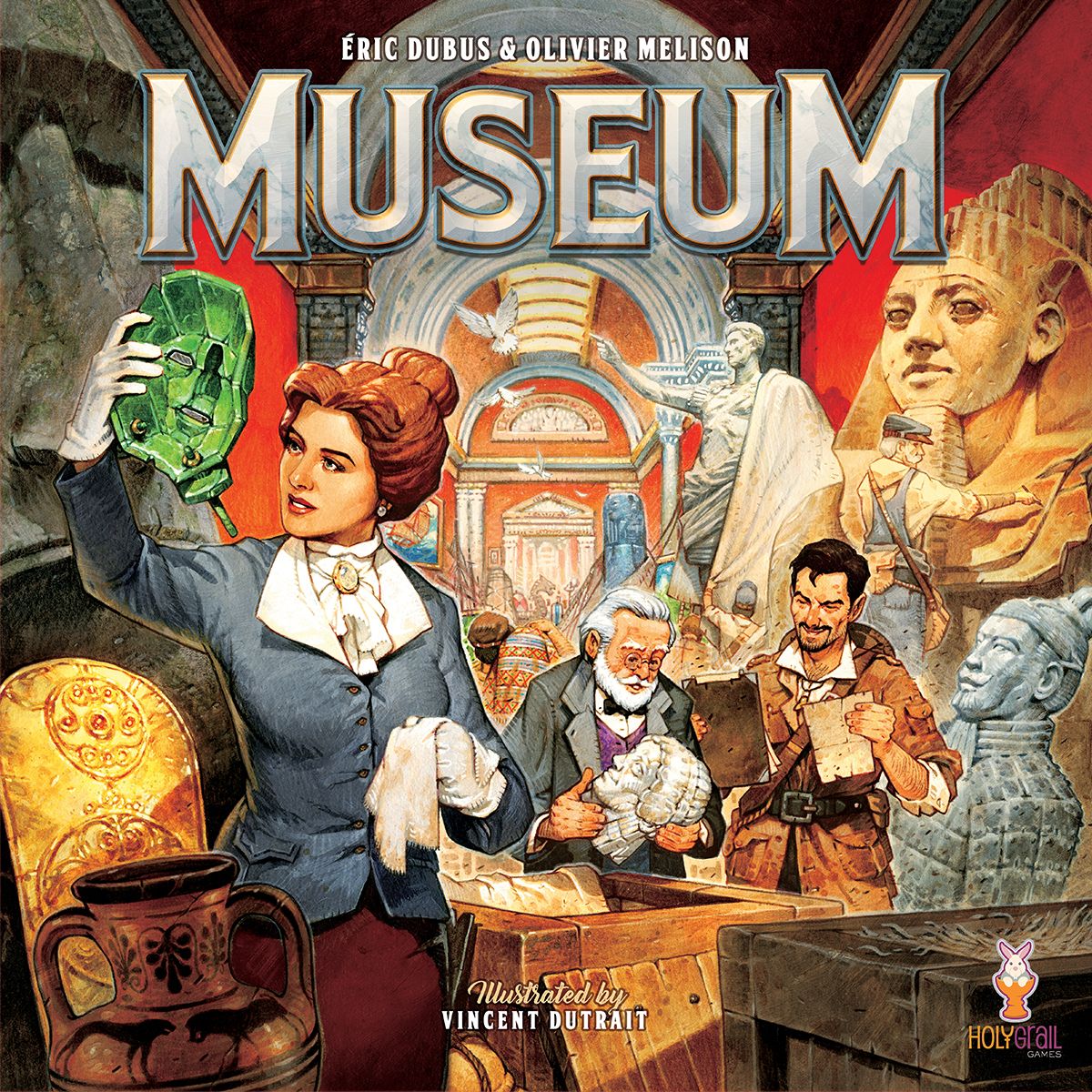 Funding Status: At the time of this posting, Museum: Deluxe Edition is already fully-funded. In fact, pledges currently total more than 5x the initial funding goal, with 5 days left to go on the campaign.

What It’s About: Players are curators in one of the world’s greatest museums, each seeking to assemble the greatest collection of historical objects the world has ever seen.

How It Works: “Museum is set during the early 20th century – the golden age of the Museum – when the exploration of far-away lands and the subsequent repatriation of historical relics had become commonplace. Public demand for displays of exotic artifacts is at fever pitch as patrons flock to see the forgotten wonders of the world. In this time of discovery, [players are curators] of one of the world’s great Museums, tasked with putting together a Collection of artifacts the likes of which history has never seen.”

“In Museum, players score points by placing Object cards on their personal player boards, which are paid for by discarding other cards. Players can score even more points by creating Collections. Collections can be based on card color or type, and are made by placing cards adjacently in a player’s Museum.” Museum is played over a series of turns, until a player reaches 50 points. The player finishes their turn, all other players get one final turn, and then the player with the most points wins.

Each player’s turn is divided into two phases, the Exploration Phase, and the Action Phase. During the Exploration Phase, the active player draws one Object card from any Continent, placing it in their hand. Then, in player order, every other player may also draw one card from any Continent for free. For each player that chooses to draw a card, the active player may take one Prestige point from the reserve.

When Performing an Inventory, the active player collects as many cards from their Common Pool back into their hand, while observing the 7-card hand limit.

The 2nd Edition Upgrade pack adds an updated scoring system, modified Patron cards, a change to the Inventory action (players can gain Prestige points in combination with re-claiming cards into their hand), updated Favour cards, and updated, streamlined rules for all expansions except the People’s Choice Gameplay & 5th Player Expansion.

The Kickstarter Update Pack includes The League of Extraordinary Explorers (introducing new legendary artifacts), The Crystal Skulls mini-expansion (introducing an anonymous Collector who will purchase any Skulls the players find), a solo mode, The Continents Board, The Assistants mini-expansion (giving players asymmetrical powers and scoring conditions depending on which Assistant they choose to work with them at the start of the game), The Figurines (to replace player scoring tokens), and Discard Boards.

*Please note that in an effort to support the online and brick & mortar retailers who continue to support Holy Grail Games, Holy Grail will not be offering the Museum base game or any of the 4 previous expansions (The People’s Choice Gameplay and 5th Player Expansion, The World’s Fair, The Archaeologists, and The Black Market) currently available at retail to backers from Belgium, Canada, France, Switzerland, the UK, or the USA. Customers from these countries will need to buy the Museum base game and any of those 4 expansions they’d like via retail outlets.

KS Exclusives:
The Deluxe Box & GameTrayz storage system, The C’thulhu Relics & Historians Expansions, the Bad Press mini-expansion, and the Stretch Goal Pack with the KS-Exclusive content from the first campaign.

All-In Total: In the continental U.S., you’re looking at $62 for the Newcomers All-In and $16 in shipping for a total of $78. If you’d also like the Sleeve Bundle, then $97. But keep in mind you’ll also need to purchase the base game and any of the 4 previous expansions via retail outlets, and you won’t be able to play the game without at least purchasing the base game separately.