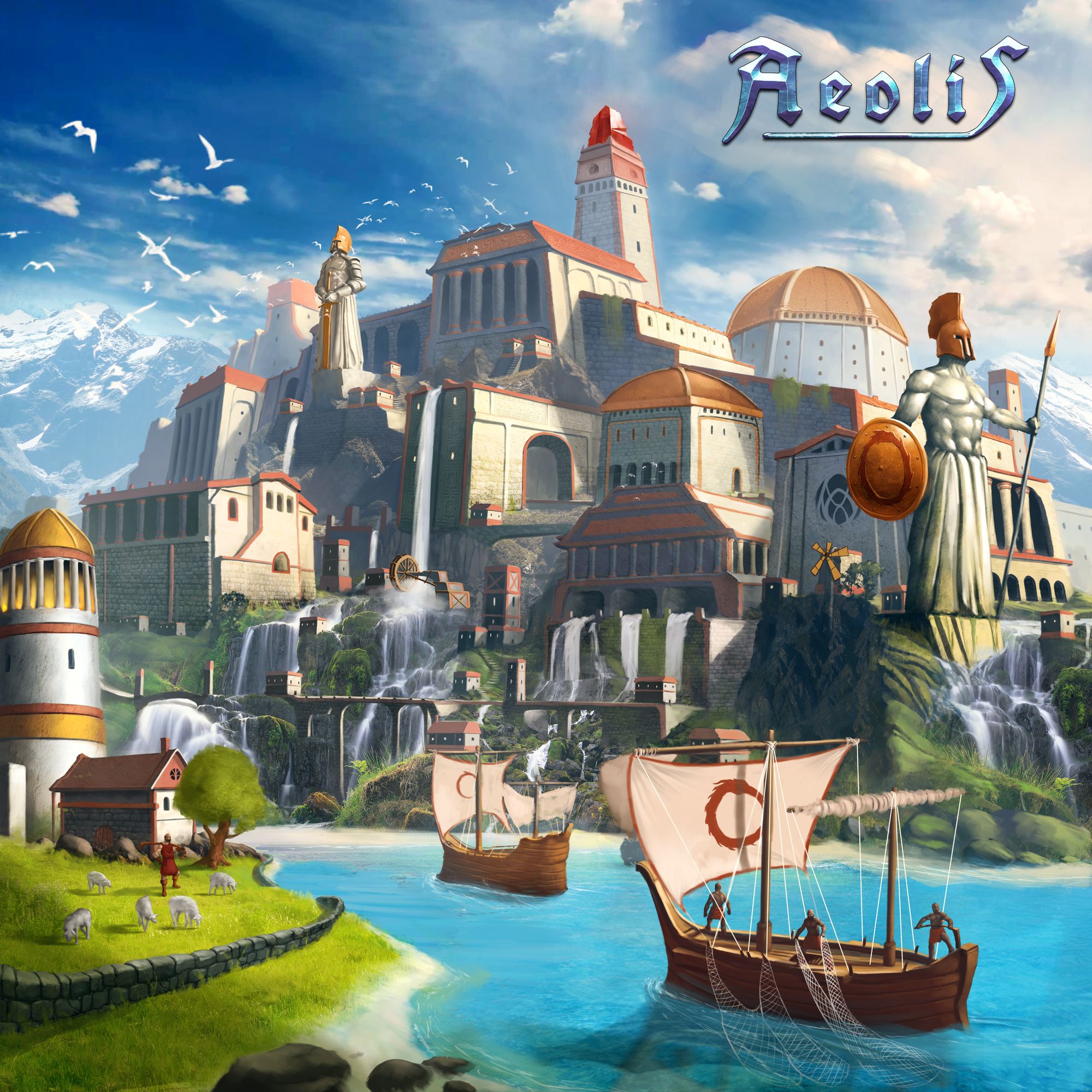 Funding Status: At the time of this posting, Aeolis is already fully-funded.  In fact, pledges currently total more than the initial funding goal with 3 days left to go on the campaign.

What It’s About:  A fully cooperative, kingdom-building game “with strong civ aspects and lots of detailed, quality miniatures.”

How It Works: The game’s scenarios (7 solo, 7 multi-player in the Core Lorebook included with the game) give various win conditions. Or players can play without using a scenario, simply trying to survive the incoming invasion. Incorporating Heroic Quests will also require the player to discover a special technology to achieve victory.

The game generally plays over 10 rounds, with 4 phases in each round: Setup, Player, Enemy, and Conclusion. During the Setup Phase, automatic actions are resolved: structures produce goods, workers are trained, Scientists produce Research, and Events are drawn. During the Player Phase, players take actions depending on which of the game’s 7 Heroes they’re controlling. The 7 available Heroes are: The Queen of the Acropolis, The Merchant of the Agora, The Philosopher of the Academy, The Hoplite of the Arena, The Priestess of Balance of the Temple, The Serpent Magi of the Oracle, and the Triaconter of the Harbor. The Queen, for instance, can Produce Structures, Produce Workers, engage in Diplomacy (in order to Confront an Event), and Upgrade the Acropolis. Whereas the Merchant can Buy & Sell, Donate to Increase Morale, and Upgrade the Agora. Once the players have taken their various actions, during the Enemy Phase the Events are resolved. This includes the likes of Natural Disasters, Plagues, Raids, Infernos, Plunders, and Invasions. Finally, in the Conclusion Phase, all resources are taken from the board and allocated to the Heroes’ Mats, with players deciding who gets what, and the Queen settling any ties. Players can also exchange anything from Workers to Resources to Gold during this phase.

Generally, players need to work together to survive the various Events. If players refuse to cooperate with each other and only pursue their own goals, they’ll usually end up all losing. Success then comes from balancing individual goals with the priorities of the group.

Comparisons: Aeolis is largely unique as a result of its widely diverse player actions. In that sense, it bears some comparisons to the likes of Root and Vast. But Aeolis is primarily still a civilization-building and dudes-on-a-map/miniatures war game. Some other well-regarded and well-known civ/war games include 7 Wonders, Age of Empires III: The Age of Discovery, Cyclades, Eclipse, Nations, Through the Ages, and Twilight Imperium. And Dreamcraft’s first published game from much of the same design team, Theosis, also features miniatures and variable player powers, but in a fantasy setting.

All-In Total: In the continental U.S. you’re looking at $162 for the Collector’s All-In Family Pledge (do yourself a favor and put your $ in service of the version with non-misogynist art) and $32 in estimated shipping for a total of $194.

Aeolis completes its Kickstarter on Monday, November 4th and tentatively ships in December 2020.