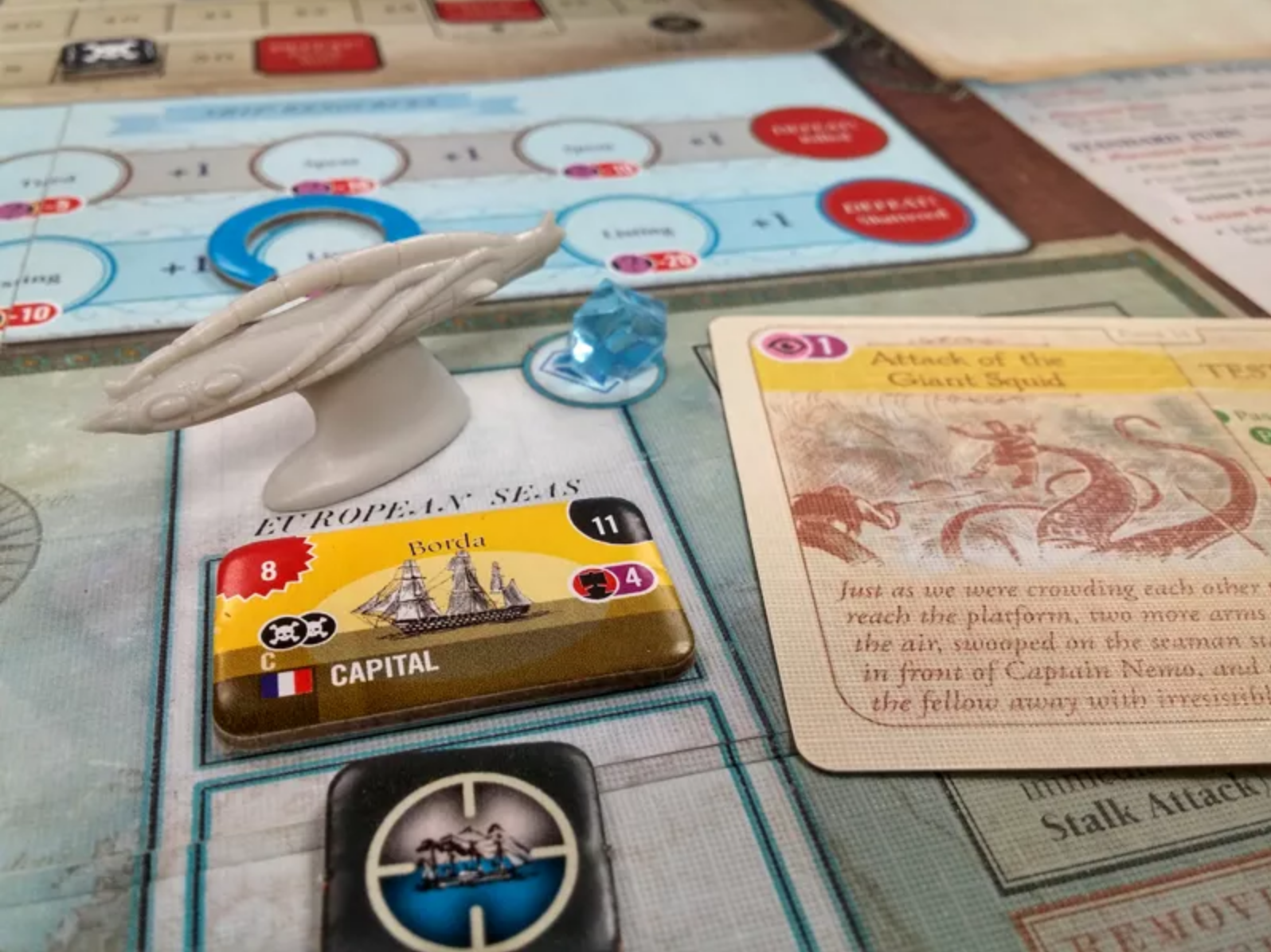 Funding Status: Currently at 40% with 5 days to go.

Summary: “Set within the titular region within Okanagan Wine Country, in Naramata, the players assume the roles of tour bus operators ferrying visitors to the various wineries nuzzled within the ten-minute drive along the Naramata ‘Bench.’ Players will attempt to satisfy as many customers as they can through a day of operations, all the while earning prestige (equating currency), which can be spent to upgrade operations or influence the wineries throughout a tour route. Tourists are gratified through tastings, cheese, photos of the beautiful vistas, along with wine pairings and purchases.”

Publisher: Victory Point Games (Dawn of the Zeds, Renegade, Zulus on the Ramparts!: The Battle of Rorke’s Drift)

Summary: “The second edition of Nemo’s War, Victory Point Games’ popular solitaire offering from designer Chris Taylor, is a greatly enhanced offering featuring mass-production printing and amazing Ian O’Toole art and graphics throughout. Set in year 1870, you set sail in this amazing electric-powered submarine, assuming the role and motive of Captain Nemo as you travel across the seas on missions of science, exploration, anti-Imperialism, and War.”

Base Pledge (w/shipping): $35 (plus state sales tax), the new Journey’s End expansion only

Project: Paragon: Trials of the Chosen

Summary: “An expandable card game where players choose avatars to represent their Paragon, equip them with powerful items and abilities, and engage in combat. The game features no luck, complete control of your starting hand and draw order, and a combat system that isn’t reliant upon minions. Build your deck using eight disciplines from four schools: Martial, Magic, Mythos, and Mischief. Choose your avatars and battle to be the last Paragon.”

Summary: “A trigger-happy game in which up to 7 gunslingers will try to collect each other’s bounty in Duels, Truels and Mexican Standoff.”

Publisher: History In Action Game (Moonshot the Game, Tranquility Base)

Summary: “Set in the Caribbean and North Atlantic during the late 17th and early 18th centuries, SeaRovers recreates the true stories of the most fiendish filibusters and freebooters to ever roam the Spanish Main. SeaRovers combines card-play and hand-management, dice-based combat, attacks and saving rolls, and a pick-up and delivery system that rewards tactics and planning. All brought to life on a hex-based map with actual locations of buccaneer and pirate attacks.”

Summary: In worker placement game Dragonbrood, “players will begin with just a few young, freshly hatched dragons, but over the course of six years, each year consisting of four seasons, those few will grow in number and size, possibly even awaking your own slumbering Elder Dragon body. Players will ultimately, through clever choices of timing and possibly color abilities, be placing their Dragon meeples in various locations to gain, trade, steal, buy and spend various resources.”

In 4x & civilization-building game Shaman, “you are the Shaman leader of your tribe. Each Shaman has a collection of skulls in which they may commune with the spirit world. You must use these skulls to take actions, or harness a beast spirit, or even create and collect totems for bounties at your life’s end. The actions you choose will tell your tribe to move, engage, grow, or worship, each having its own set of choices. In doing so, you will collect resources from the land to feed your tribe, to develop technologies, to build resources, make offerings to the great spirits, activate skulls and more. As the Shaman you must be wary of impending catastrophes known only to you and the other Shaman of the world. The Shaman whose tribe has the largest population is winner.”

In asymmetric combat game War Hounds, “each player in War Hounds is the leader of a nation of dogs. Each faction has its own set of abilities, functions, costs etc. Players will play over the course of 4 years, the war ending at the close of the 4th year. Players will play in rondel turn order, each round the turn order possibly changing. Players will take one action on their turn by selecting an action in the top of their playerboard. As with everything in this era of Doggerland history, things are hierarchical, meaning a chain of command or top-down, and so in selecting actions, generally a player may not select an action above those they have already selected. Players will draft troops, build artillery, invest in new technologies, influence new policies, shift and transform their economies, and of course engage in embroiled bouts of combat. Players will conquer territories, gain medals and lose casualties. Ultimately, the winner is the nation with the most victory paws at the end of the game.”