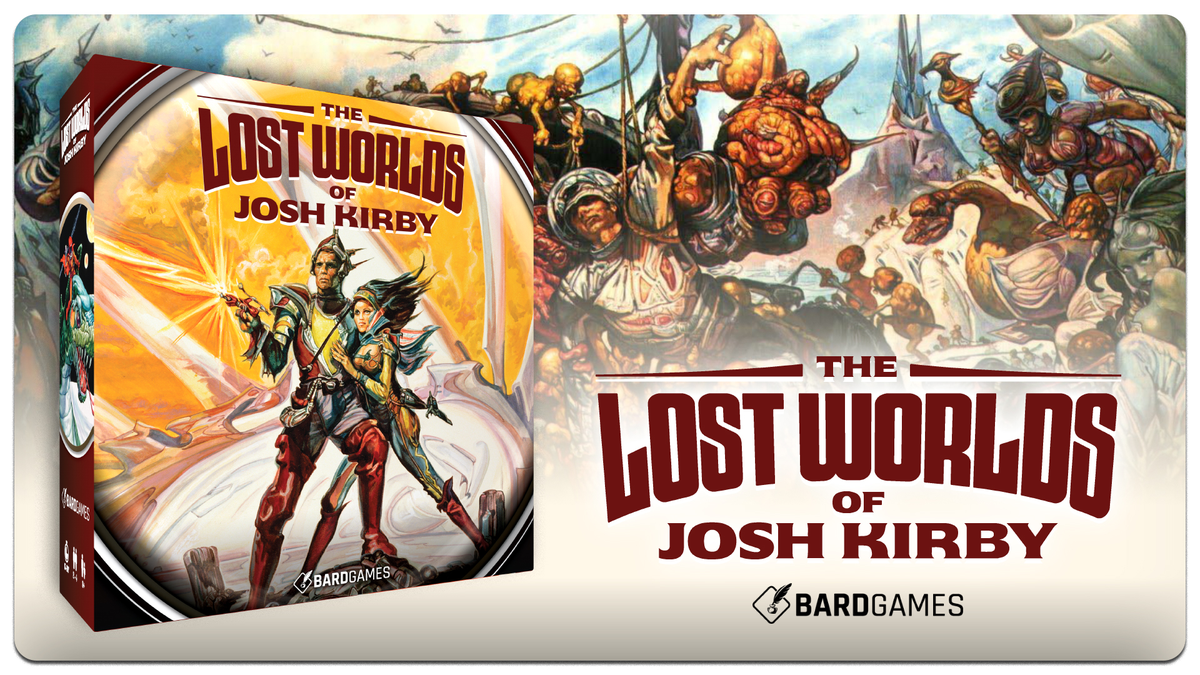 Summary:  “A light-weight map-building tabletop game about sabotage, fraud, and destruction. Players take turns placing rides in a collectively-built amusement park. Patrons are placed and move through the park based on ride exits, and each patron generates money for the different ride owners. Using the unique abilities of rides and park improvements, players move patrons, block exits, and most importantly, add danger in the form of vomit, pets, flooding, electrical failure, and more in order to influence die rolls. Insurance policies can be taken to benefit from certain poor outcomes, encouraging direct sabotage for profit. When the park finally closes due to poor quality, rides closing, or patron injury, the player with the most money wins.”

Summary:  “Featuring art never before published in games from Josh Kirby (famed sci-fi & fantasy artist whose credits include Tunnels & Trolls, Return of the Jedi, and Discworld) and a dice-based action selection system. Each turn, roll and allocate dice to Save or Conquer World cards in the center of the table — and optionally, activate renown powers or world powers. Saving or Conquering worlds will push your Morality track toward Savior or Tyrant. Your ever-changing morality affects which dice you can reroll, special powers you can access, and even endgame bonuses. Combine the powers of worlds you’ve claimed with your dice to enact sweeping change across the galaxy and rocket yourself to victory.”

Project:  The Runelords Board Game

Summary:  “Based in the world of the best-selling fantasy series by author, David Farland, players choose from four dynamic runelords, each with their own reinforcement cards that have a physical presence on the battlefield (standees) and support cards with additional spells and abilities that are drawn and played from a hand during battle. Reinforcements are sent into hex-based combat with simple but robust tactical engagement, and win conditions based on the game mode chosen from the Battle Compendium before play. Sovereignty is a stage of play where players take the pre-built armies of their selected runelords and mash them into a deckbuilding, resource management engine. Then, after several rounds of play, players take the armies they’ve built onto the battlefield for a unique, more strategic gaming experience.”