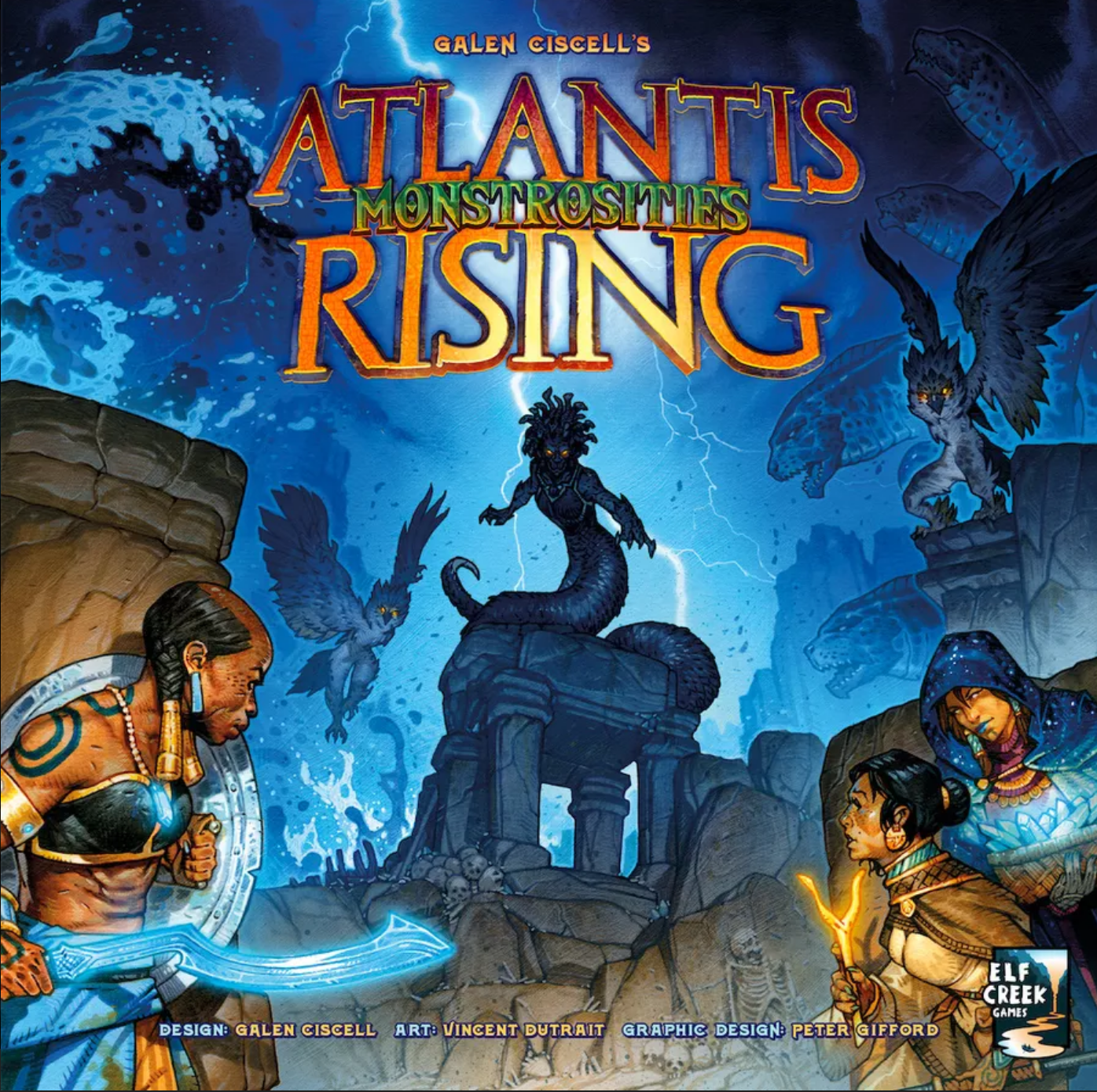 Funding Status: At the time of this posting, Atlantis Rising: Monstrosities is already fully-funded. Pledges currently total almost 11x the initial funding goal with less than 1 day to go on the campaign.

What It’s About: “An expansion for Atlantis Rising (second edition) that introduces four new mechanisms: Allies, Locations, Magic Items, and Monsters; as well as new challenges Medusa Unleashed and The Harpies’s Lair.”

How It Works: “Atlantis rising is a cooperative game, where players must work together as a team in order to win. You and your fellow players portray the leading citizens of Atlantis on the eve of its destruction. Send your faithful followers out to various places around the island to gather material resources and mystic energy or to use advanced Atlantean technology and mysterious ancient artifacts. Using these resources and actions, you must work together to construct a Cosmic Gate capable of transporting the remaining population of the island to safety, before your civilization is lost forever to the sea.”

“The game is played over a series of rounds, with each round separated into 4 phases, as outlined below.”

“In the Place Atlanteans Phase, players will place all Atlanteans from their councilor’s pool onto empty spaces on the Island or Cosmic Gate board. There is no turn order among players.”

“Beginning with the starting player and proceeding clockwise, each player must draw and resolve one misfortune card in the Suffer Misfortunes Phase. Fully resolve each misfortune card before proceeding to the next, in player order. Some misfortunes are special misfortunes. Follow the instructions on these cards when one is drawn.” This is often when Flooding occurs and parts of Atlantis are lost to the sea.

In the Take Actions Phase, “players should collectively decide in what order they should resolve the actions of their placed Atlanteans. If there is a dispute over which action to resolve next, the starting player decides. Each player has a special Atlantean called a Leader, that represents the councilor on their councilor board.”

“If every tile, including the Mystic Power Source, floods before all 10 components of the Cosmic Gate are built, then you immediately lose. Your efforts are forgotten and Atlantis is lost forever beneath the waves, fading into myth and legend. When you build the 10th and final component, the Power Core, you immediately win. Now fully operational, the Cosmic Gate transports your people to safety.”

“Atlantis Rising: Monstrosities is an expansion for Atlantis Rising (Second Edition) that offers these new challenges: Medusa Unleashed, in which the gorgon Medusa turns Atlanteans to stone: Can you break her curse and recruit her to your side?; The Harpies’s Lair, in which three monstrous, birdlike creatures steal the resources and workers you need to build the Cosmic Gate: Can you defeat the Harpies and win back the treasures found in their lair?; and a third scenario to be revealed during the Kickstarter. Also, four new mechanisms are introduced to the game: Monsters, Allies, Magic Items, and Locations.