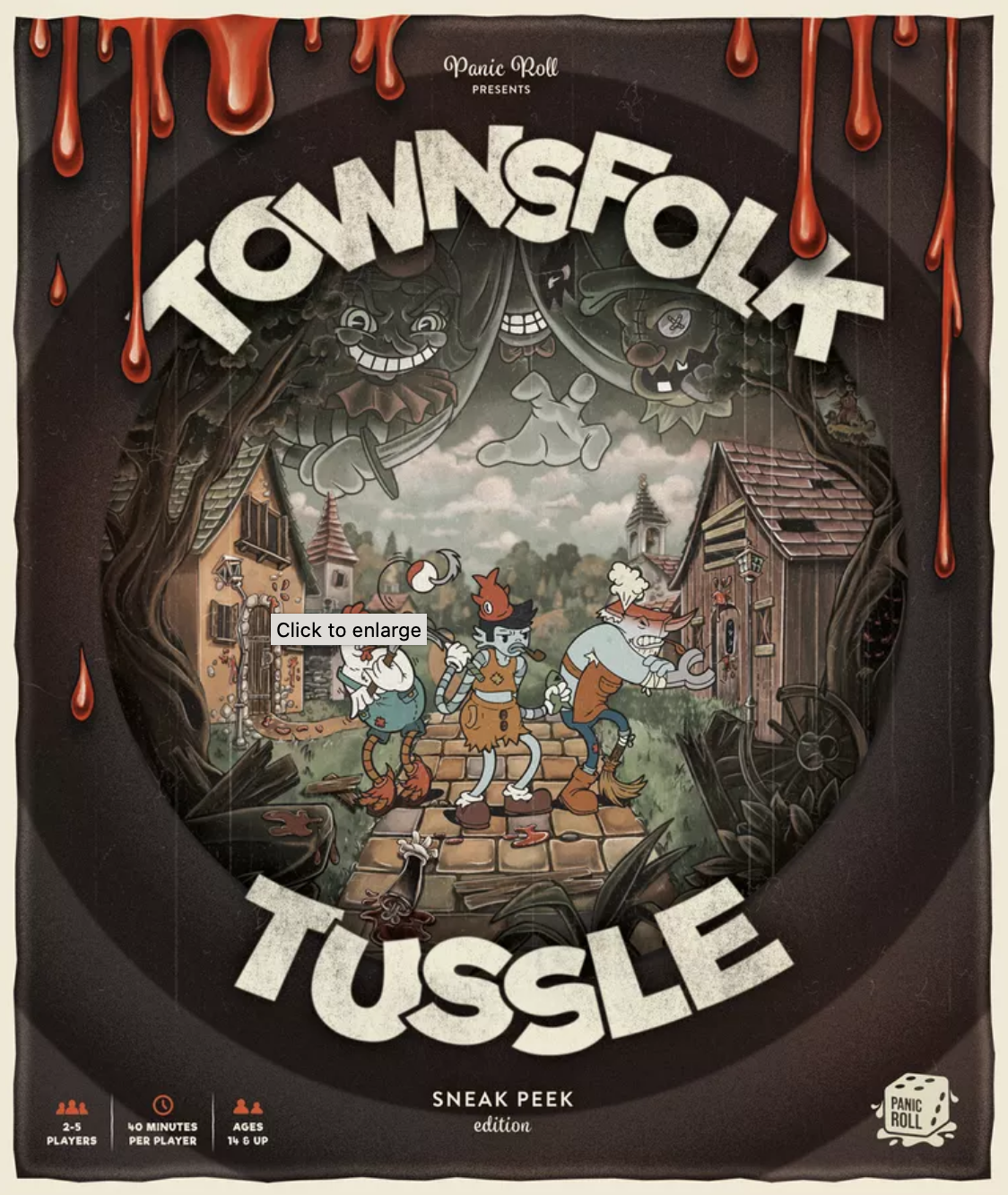 Funding Status: At the time of this posting, Tonwsfolk Tussle is already fully-funded. Pledges currently total more than 5x the initial funding goal with just more than 1 day to go on the campaign.

What It’s About: “A co-op boss battler set in a vintage cartoon universe. In each game, your goal is to take down four unique Ruffians, each one tougher than the last. You’ll build up your townsfolk with gear, explore Eureka Springs, and concoct unique strategies to take down even more unique hoodlums.”

How It Works: Players choose their characters, then proceed to play over 4 rounds. Each round is comprised of a Town Phase followed by a Fight Phase. During the Town Phase, players receive 3 Feats of Mettle and a Town Event. If they have the funds, they can shop with the Peddler to obtain more gear. Then during the Fight Phase, one of the games’ Ruffians invades and its up to the townsfolk to defeat him with card actions and skirmish deftness.

“Add up those Feats; before the Final Fight begins, you’ll name a new sheriff. They’ll receive a crucial piece of gear for the last scuffle. But be careful, there’s a lot of weight on the new sheriff’s shoulders. If they perish in the Final Fight, all is lost!”

“Each game of Townsfolk Tussle can result in three different endings per Ruffian. Some may even unlock new gear for use in future games. Regardless of your results, you’ll be treated to a short story of the town’s aftermath.”

“You may have bested the Ruffians once, but this is only the beginning. We put a huge focus on replay-ability to ensure every play-through of Townsfolk Tussle is unique. With 10 Ruffians, each with their own variations of difficulty, Final Fights, and alternative endings, there are thousands of possible combinations of Ruffian encounters. Don’t forget about the 250+ pieces of gear to discover and unlock, and the countless Town Events and Feats of Mettle to spice things up.”

Comparisons: Townsfolk Tussle shares a lot of mechanics with Kingdom Death: Monster, but they differ in that Tussle is designed for one-off battles whereas Kingdom Death: Monster is all about the long campaign. Because of this, as well as Townfolk Tussle’s unique, vintage cartoon art-style, Tussle is likely also the easier game to get to the table with casual and non-gamers. There are a bunch of dungeon crawlers on the market, but boss battlers are harder to come by. Sentinels of the Multiverse is essentially a bunch of boss fights. And games like Arkham Horror, Aeon’s End, Eldricth Horror, Too Many Bones, and Too Many Bones: Undertow feature plenty of boss fights, just usually not only boss fights. Aeon Trespass: Odyssey is primarily a boss battler, but that game won’t deliver its Kickstarter until next year.

What Should I Pledge?:
$85 Brave Local Pledge: the Townsfolk Tussle base game with all unlocked stretch goals.

KS Exclusives
The entire game is a Kickstarter Exclusive.