Kickstart This! #272: Monsters on Board 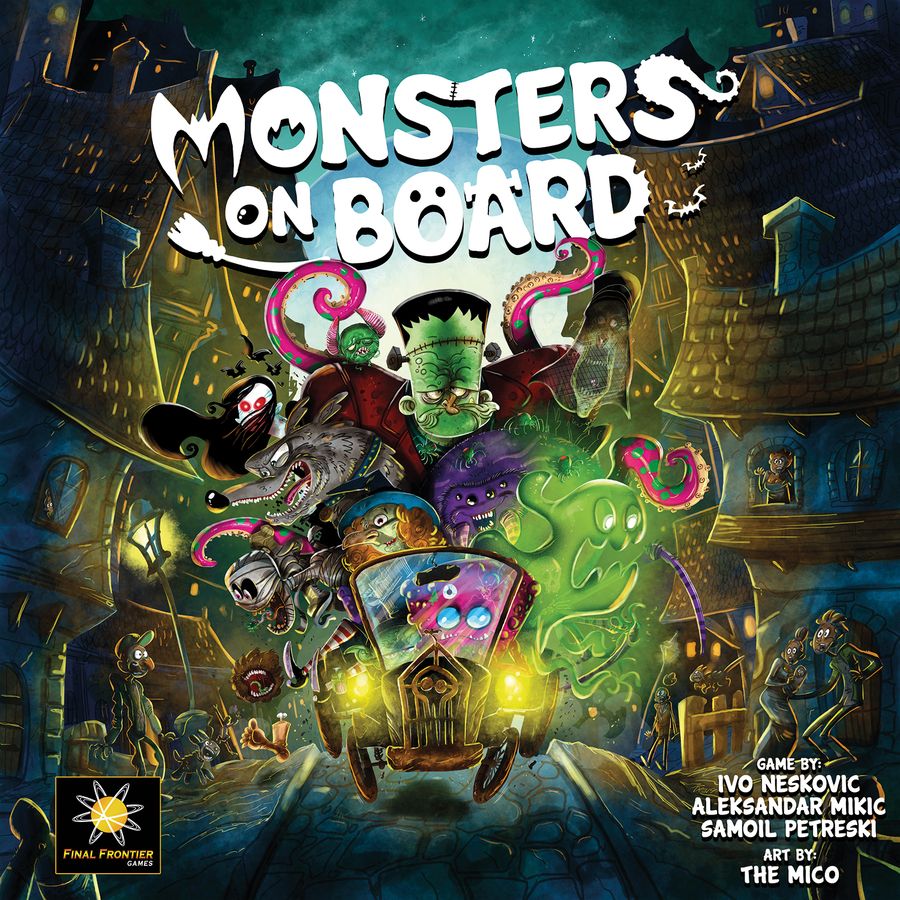 Funding Status: At the time of this posting Monsters on Board is already fully-funded. Pledges currently total just less than 6x the initial funding goal with 5 days left to go on the campaign.

During the Arrival Phase, “beginning with the first player, each player takes four Lord dice from the bag, rolls them, and places them into their Fearmobile, preserving their face.”

During the Draft Phase, “in turn order beginning with the start player, each player selects one Lord die from the Fearmobile in front of them, and places it into their Supply (just above their player board). Once all players have made their selection, all Fearmobiles are passed to the right. Repeat this process until all players have drafted four Lord dice.”

During the Scare Phase, “simultaneously, all players advance their Lord dice one-by-one from their Supply into a vacant Dock space. Each time a Lord dice is placed into a vacant Dock space, immediately Advance Grunt of the matching color. If the associated Advance Grunt action grants any actions, they must be taken before moving the next Lord die onto the Dock. Three Lord dice of the player’s choice will continue through the Swamp, across the River, to be placed into the Order of Spider Jack during the Cult Phase. The remaining Lord die is placed into the single Swamp space and immediately grants Malice based on their Rank (as shown on the chart below the space). After a player places all four Lord dice from their supply and takes any associated actions, they may advance to the Cult Phase. Players may advance to the Cult Phase independent of each other.”

During the Spook Manor Phase, “in clockwise order, beginning with the first player, each player may purchase an Arch Monster card or a Ghost token by spending the indicated amount of Malice. Players can only purchase a single card or a token on their turn, but may purchase on multiple turns in the same Spook Manor Phase assuming they have the Malice to pay for them. After buying an Arch Monster card, place it in front of you. Any time during the game,you may spend 1 Malice to discard an Arch Monster card and play one of the actions indicated on the back of the card. You can discard multiple cards. At the end of the game, Arch Monster cards may grant you additional Spook Juice based on how well you fulfilled their criteria. After buying a Ghost token, immediately place it onto a vacant Neighborhood space of any color. Grunts that enter a space with a Ghost token gain the printed action or benefit. Note: Ghosts that have the action must be placed on the first vacant Neighborhood space of the matching color. Take one matching color Grunt from the reserve and place it on top of the Ghost.”

Comparisons: Other games by Final Frontier Games, particularly those with art by Mihajlo Dimitrievski, make for some decent comparisons. But keep in mind that Monsters on Board is a lighter game, a simple dice-drafting game that’s all about chaining bonuses and arranging dice for end-game scoring. A few other well-regarded dice-drafting games include Grand Austria Hotel, La Granja, Pioneer Days, Pulsar 2849, Rajas of the Ganges, Seasons, and Sushi Roll.

KS Exclusives
None specified, but it’s possible the Deluxe Version (including the miniatures) and/or the Monster Mixer Expansion could end up being Kickstarter exclusives.

Monsters on Board completes its Kickstarter on Wednesday, September 30th and tentatively ships in June 2021.