Kickstart This! #249: Shadow Kingdoms of Valeria 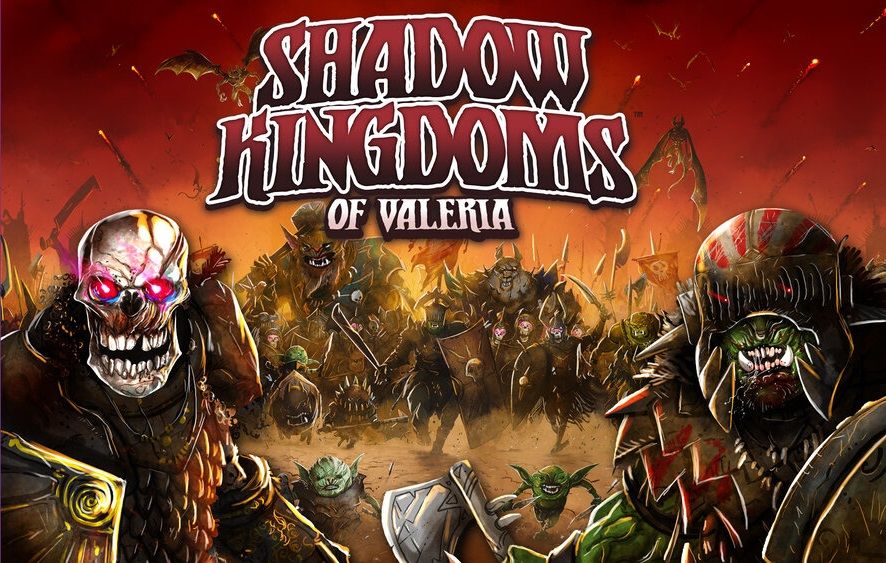 Funding Status: At the time of this posting, Shadow Kingdoms of Valeria is already fully-funded. Pledges currently total almost 2.5x the initial funding goal with 3 days left to go on the campaign.

What It’s About: “An engine-building game where you’ll draft Troop dice to complete battle plans, hire Champions to fire up your engine, and level-up your Warden’s abilities to pull off amazing combos.”

How It Works: “You are a Warden hungry for the destruction of Valeria. Visit shrines to gain troop dice and activate shrine powers. Recruit champions, gain gems and gold to fuel your war machine, and call upon ancient magic to aid you in your glorious cause. Scout for battle opportunities and command your troops into battle to conquer the lands and earn Victory Points. The player with the most Victory Points at the end of the game will be declared the General of the Dark Army.”

“At the start of your turn, if there are a total (or fewer) amount of dice equal to the number of players in the game on the game board (or in the unlikely event that there is nowhere for you to legally move), return all dice on the game board to the bag. Then, starting in the Gem Shrine and moving clockwise, randomly draw and roll a number of dice equal to the number of players from the bag to refill each of the 5 Shrines. Additionally, each face-up Champion card on the board (from left to right) is returned to the bottom of its respective deck. Then, new Champion cards are drawn and placed face-up in the slots.”

“After taking a die from the Gem Shrine, you may immediately take a Gem and place it on your player board.” Gems from the Gem Shrine allow players to manipulate dice when completing a Battle Plan, returning 1 Gem to flip a die to its opposite side.

“After taking a die from the Magic Shrine, you have 2 Shrine action options: Claim 1 Award or Gain 2 Magic. To claim an Award, you must show that you currently meet the criteria of one of the 3 face-up Award cards. Place a Conquest Marker from your player board to the highest available Victory Point slot on the card where you meet the criteria and immediately gain the Victory Points.” Magic is tracked on the player board, and players can hold up to 20 Magic at a time. Magic is used at the Tactics Shrine or the player’s Camp to discard a Battle Card in the Battle Plans line and draw a new one; it is also used at the Champions Shrine to similarly refresh the Champion cards.

After taking a die from the Champions Shrine, you may buy a Champion card by paying the cost in Gold, plus one additional Gold for each card you already have of the same type (Instant, Ongoing, or End-Game). “The number of Champion cards you are allowed to have at one time is limited by value shown on your player board.”

“After taking a die from the Gold Shrine you immediately gain Gold equal to the opposite of the Discount value from the die you took this turn (e.g., a -5 Discount will gain you 5 Gold).”

When Performing a Battle at your Camp, players perform the following steps in order: Choose a Battle Plan (from the player’s reserve or the Battle Plan line), Choose a Number of Dice (from the player’s board), Determine the Total Strength (by adding them from the Dice), Level Up your Player Board (placing a Conquest Marker to a Skirmish Area on your Campaign Board), Tally Up the Victory Points (corresponding to the Total Strength, as shown on the player’s Camp chart), Gather any Chain Bonuses (earned from Conquest Marker placement), and Return all Dice (to the bag).

Comparisons: The other Valeria games share the same theme and art, if not the same mechanics. The original Valeria: Card Kingdoms is a light tableau-builder with deck-building elements. Quests of Valeria features card drafting and set collection. Villages of Valeria uses hand management and the follow action. The upcoming Corsairs of Valeria is a re-implementation of Wacky Pirates, a race game with dice rolling. And the currently delivering Margraves of Valeria is a heavier game focusing on worker placement and hand-building, making it the game closest to Shadow Kingdoms.

Shadow Kingdoms is almost similar to Eschaton and Tyrants of the Underdark, two games that pair deck building with area control, but it focuses more on completing Battle Plans and reaping bonuses and Chain bonuses from the Skirmish Board than just simple area control. And of course, there’s no deck building here, but worker placement with resource pool-building.

What Should I Pledge?:
$55 Shadow Kingdoms of Valeria (English): a copy of the base game, plus the two expansions, Shrine of the Titans and Great Battles.

Add-Ons:
As has been stated on the Shadow Kingdoms Kickstarter page, “We will have several other Daily Magic Games products available to add on when we launch the pledge manager.” However, neither the titles nor their prices have been specified.

KS Exclusives
Both of the expansions included in this Kickstarter, Shrine of the Titans and Great Battles, are Kickstarter Exclusives. They will be available directly from the publisher’s website in the future, but they will not be available via retail outlets.

All-In Total: In the continental U.S., you’re looking at $55 for the Shadow Kingdoms of Valeria (English) pledge plus $9 in shipping for a total of $64.

Shadow Kingdoms of Valeria completes its Kickstarter on Friday, July 31st and tentatively ships in May 2021.