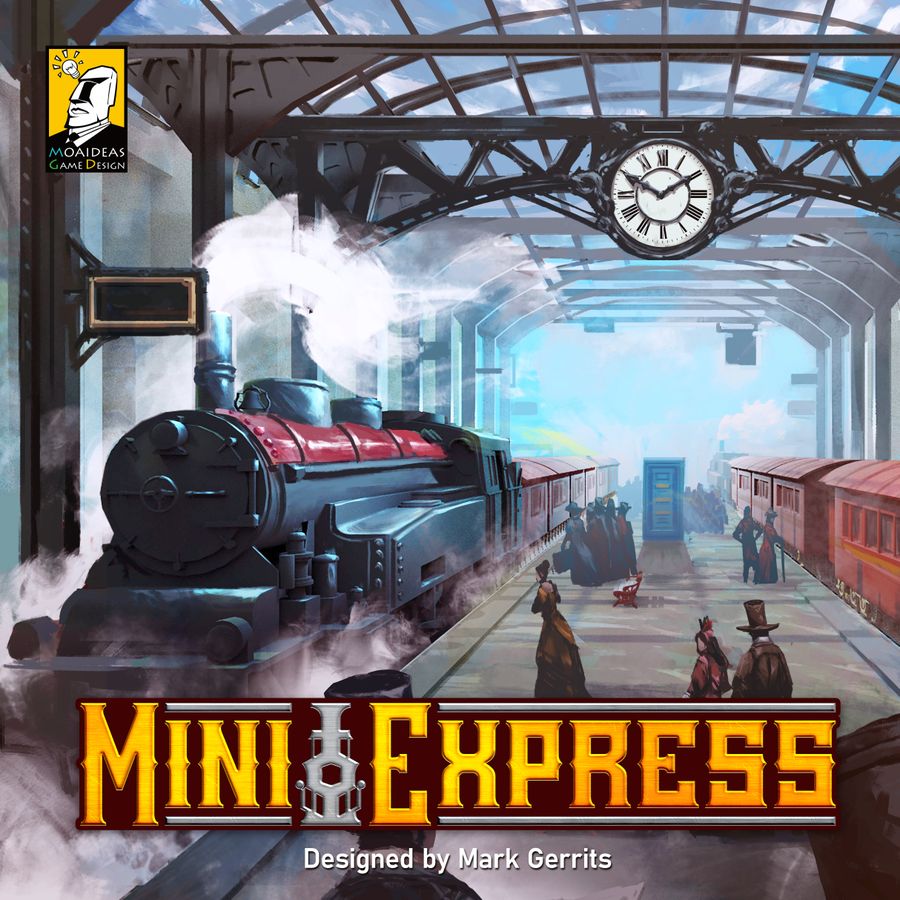 Funding Status:  At the time of this posting, Mini Express is already fully-funded. Pledges currently total almost 6x the initial funding goal with less than 2 days to go on the campaign.

What It’s About:  “A strategic train game where players are wealthy capitalists managing four railroad companies. Players only carry out one of the 2 actions on their turn: expanding the railroad of a company or taking a stock tile from a company.”

How It Works:  “The game is played over several turns until the game ends. On their turn, each player must take one of the following actions: Take a Share, Build Track, or, later in the game after any company track reaches or passes the dotted blue line, Build Track on the West Coast.”

When Building Track, the player “may build track for any of the four companies. Each time they choose this action they must connect to a single city. There are no landscape costs in Mini Express; they may place cubes on any hex adjacent to a hex containing cubes of the same color. When placing on hexes occupied by other companies, the first comers will receive a track from the supply.” So the active player “chooses one company that has enough available cubes in its ‘Tracks’ space,” then chooses a nearby city that has not yet reached its maximum entrance limit, doesn’t already contain a cube of the same color, and is close enough to build to with the currently available cubes. They’ll remove the demand tile if the city reaches its cube limit during their turn, and increase the value of the associated company.

Play continues in this manner until there are 2 empty stacks of company share tiles or when 2 companies have no Tracks in both the general supply and Tracks area. Play then continues until each player has had an equal number of turns, and final scoring commences.

During final scoring, players score Reputation VP for each company depending on where they fall on the Influence Track. The higher the player is on a given track, the higher-scoring the Reputation Column used to determine their share price in that company. Then each player will score the appropriate number of points for each share they possess of each of the 4 companies. In case of a tie, the player with the fewest share tiles wins; further ties are broken by turn order.

There are also currently solo rules and a 2p variant ruleset included with the game.

Comparisons:  Railways of the World and Age of Steam are probably the best comparisons. Chicago Express remains a well-rated entry in the genre, and recent entries in the genre like Irish Gauge and Ride the Rails have been gaining traction. Despite the Kickstarter page advertising the erroneous labelling of Mini Express as a 18xx-lite board game, it’s really just a cube rails/train game, pared down to eliminate money and bidding.

While Mini Express may not be as complex as an 18xx, it’s still a heavier game with crunchier decisions than, say, Ticket to Ride. And where Ticket to Ride essentially focuses on set collection, Mini Express remains focused on the economics of the game, just using the reputation tracks as a simple way to circumnavigate the game’s lack of physical currency. Mini Express is also only a spiritual sequel to Mark Gerrits’ previous game Mini Rails, and doesn’t share much with that game in terms of gameplay.

KS Exclusives
While Moaideas Game Design is leaving the inclusion of the various upgraded components in future versions to some of their licensing partners, they’ve stated that the cost makes it unlikely all of them will be included in future retail versions.

All-In Total: In the continental U.S. (and assuming you’re not interested in picking ip the other games offered as add-ons) you’re looking at $71 for the Round-Trip Limited Express pledge, $29 for the Playmats, $20 for the Wooden Inserts, and $23 in shipping for a total of $143.

Mini Express completes its Kickstarter on Wednesday, May 20th and tentatively ships in November 2020.