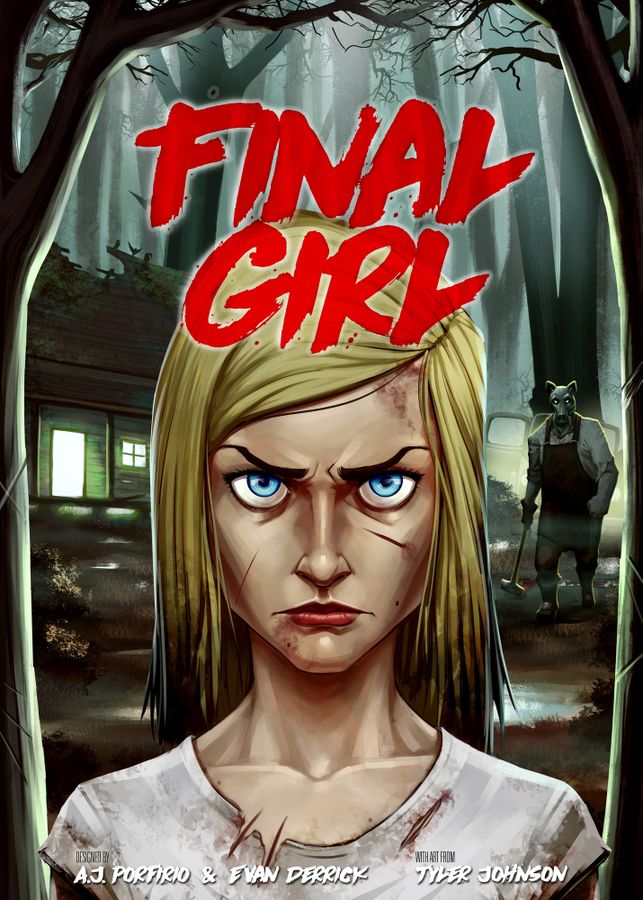 Funding Status:  At the time of this posting, Final Girl is already fully-funded. Pledges currently total more than 7x the initial funding goal with just over 1 days to go on the campaign.

What It’s About:  “A solitaire-only game that puts the player in the shoes of a female protagonist who must kill the slasher if she wants to survive.”

How It Works:   “You are the Final Girl, facing off against a horrific Killer. You will be moving around the scene to search for helpful items, save victims, and to confront (or run away from!) the killer. Meanwhile, the killer will be wreaking havoc in many ways, but most of all by killing innocent victims and attacking you! Most of the time the game only ends one of two ways: either the Final Girl destroys the Killer, or the Killer slays her! In the rare instance that both die at the same time, the Final Girl has won, making the ultimate sacrifice to rid the world of the vile killer.”

“Your strategy is completely up to you, but don’t lose sight of your ultimate goal (usually, but not always, to kill the Killer!). It is not required that you save any of the Victims and unfortunately, as is often the case in the movies, some Victims are just beyond help. Better them than you! Saving victims does have its benefits though, and doing so gives you valuable bonuses including, if you save enough of them, an ultimate ability unique to the Final Girl!”

Choose from any of the (5) Feature Film Box (this includes the Bonus Feature Film that can only be added separately and not through a pledge, Frightmare on Maple Lane). “The game is played in turns, each consisting of 4 phases. You will play until the Final Girl is dead or you have achieved victory (usually by killing the killer).”

The four Phases of each Game Turn are: Action, Planning, Killer, and Upkeep. During the Action Phase, the player “plays Action cards to move around, attack, rest, and/or take various other actions. They may also discard cards from their hand to convert a partial success during a Horror Roll OR to gain a Time Point. The player starts the game with the six 0-cost Action cards.” The Action Phase ends when the player a) decides to stop, b) runs out of cards, c) an Action Card results in a red X, or d) the Time Marker goes below 0.

During the Planning Phase, the player spends any remaining Time to purchase more Action cards from the Action Tableau.

During the Killer Phase, the player resolves the Killer Action as indicated on the back of the Finale Card next to the Killer phase icon. (Once the Finale is triggered, the card is turned face up and a different Killer action applies for the remainder of the game). Then the top Terror Card is drawn and resolved from top to bottom.

During the Upkeep Phase (which is not always required), the player resolves upkeep indicated by Events, Items, or special rules. During this phase, the player may also exchange/rearrange items between their backpack and hands.

“The game ends as soon as the victory conditions are met (usually by killing the Killer) or the player is killed, in which the game ends in defeat. In the rare case that both happen at the same time, the player is still victorious because they have accomplished their goal, even if it required the ultimate sacrifice.”

Comparisons:  Hostage Negotiator. Van Ryder Games even states on their Final Girl Kickstarter page, “We took the core mechanisms from our hit game Hostage Negotiator and evolved the system to fit the horror theme of Final Girl.” Another recent solo-only Kickstarter game we recommended is The Ratcatcher, and as stated in that game’s Comparisons section, a few very popular and highly-rated games that audiences agree play best at 1-player are Mage Knight, Nemo’s War, and Robinson Crusoe: Adventures on the Cursed Island. A few well-rated games that are strictly solo-only include Black Sonata, Friday, and Maquis, in addition to Hostage Negotiator.

KS Exclusives
This is a bit unclear. There were many items added to Final Girl via stretch goals, but they may not be Kickstarter-exclusives.

All-In Total: In the continental U.S., you’re looking at $99 for the Full Fright in 3D pledge, $20 for the Game Mat Bundle, up to $10 for the Frightmare on Maple Lane Bonus Feature Film (it could end up being free, and will depend on how the Kickstarter performs in its final hours), plus $16 in shipping for a maximum total of $145.

Final Girl completes its Kickstarter on Friday, May 15th and tentatively ships in May 2021.