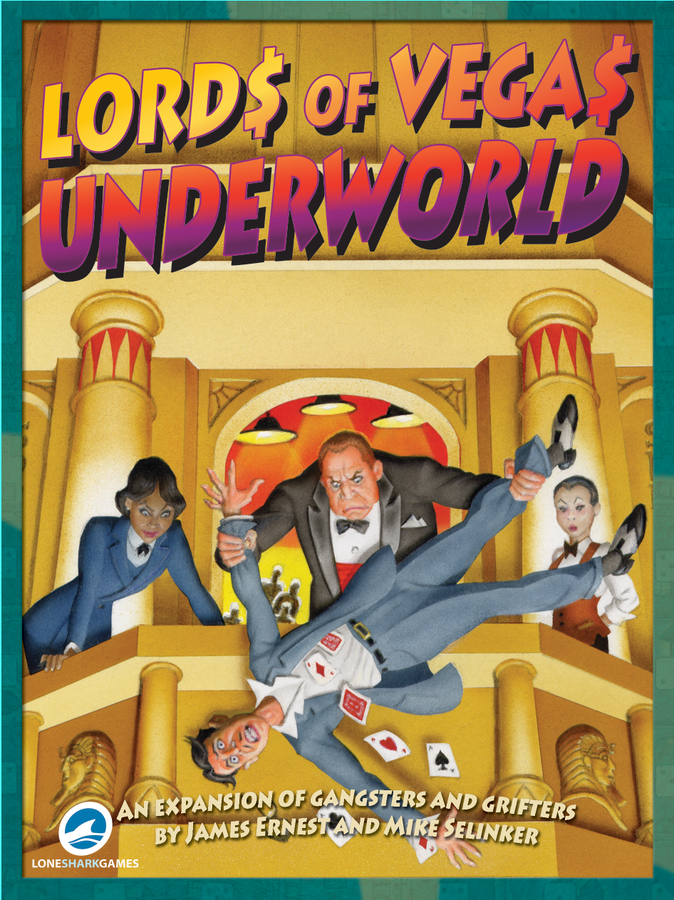 Funding Status:  At the time of this posting, Lords of Vegas 10th Anniversary: Underworld and Boss Bundle is already fully-funded. Pledges currently total more than 30x the initial funding goal with less 2 days to go on the campaign!

What It’s About:  The new Underworld expansion “introduces mob figures, showgirls, private jets, and other additions” to the “high-energy casino-building game.”

How It Works:   The game board in Lords of Vegas is comprised by a grid of Casino “lots.” At the start of the game, each player receives 2 lots and a sum of money. Then, each turn, players begin by drawing a card and acquiring the lot on the card. The owned lots then pay out $1 each to their owners, and constructed casinos pay out in both money and points. As casinos are built and upgraded, they’ll pay out based on the pips of the die placed in the middle of the casino, resulting in larger sums. If, for example, a player draws a single-colored card, all casinos of that color pay out. Players who have many casinos of that color with high-pip dice on them will earn quite a bit of cash.

Then, the player will have several different actions they can opt to take: Build, Sprawl, Remodel, Reorganize, and Gamble. To Build, the player pays the amount shown on a lot they own, remove their lot marker, and replace it with a casino and one of their dice, set to the starting pip count marked on the board for that lot. When Sprawling, a player can pay twice the listed amount on a neighboring lot to a casino they already own. This is a quick way to literally sprawl one’s casino empire without already having the lot card. The risk here is that if and when the lot card does appear, whoever draws it can steal that casino back out from under the current owner. Remodeling changes the color of the casino, and a player must pay $5 per casino to remodel all of the connected casinos in one area. This is usually done to change the likelihood of a payout during the first step of a player turn. When Reorganizing, players pay $1 per pip of each die in a casino network to reroll all of the dice in that similarly-colored section of casinos. The reason is that, when same-colored casinos are all connected (touching), despite the fact that they may be owned by different players, the player with the highest die value essentially controls all parts of that casino network. Forcing a reroll can result in a change to who the boss is of the network.

The Gambling action can be taken once per turn, and it’s essentially a way for a player to earn even more cash on their turn. The player chooses another player’s casino network, paying $5 for each casino tile in the network. Then they roll 2 dice and add the result. A 3, 4, 9, 10, or 11 results in the casino owner paying them the amount bet. A 2 or 12 results in the boss paying the player twice what they bet. And a 5, 6, 7, or 8 is a loss for the player, and the pay the boss of the casino the amount of their bet.

If a player ever has 90+ points, they win immediately. Barring that, once the End Game card appears, there’s one final payment for the strip, and then the player with the most money wins.

The Up! Expansion allows player to build levels to their casinos, which prevents takeovers, as opponents must build upwards to a similar level before they can Reorganize. And the new Underworld Expansion adds Underworld cards that can be bought with the new Acquire action, allowing players to accumulate new variable abilities, adding a lot of variability, and consequently replayability, to Lords of Vegas.

Comparisons:  Lords of Vegas is essentially a city-builder or territory-builder. So in some ways you could compare it with the likes of Citadels, Keyflower, Kingsburg, Lisboa, Lords of Waterdeep, Quadropolis, Suburbia, or Tiny Towns. But it’s the Vegas-theming, and the fact that the buildings being bought are casinos, as well as the way the dice transform the game into an area control battle with a heavy amount of take that and push your luck that really gives Lords of Vegas its unique flavor. I don’t know if there’s another game that plays similarly. And the game does manage to capture an element of risk-taking and going for broke with high-risk stakes that translates some of the excitement and risk of gambling in a casino. The Godfather: Corleone’s Empire plays differently, but also features a highly combative battle for area control with a large amount of take that, and in that sense makes a fairly good comparison as well. Plus, mobsters are no strangers to Vegas.

All-In Total: In the continental U.S. (and assuming you don’t feel the need for the signed briefcase or promo cards with your own illustration), you’re looking at $299 for the 10th Anniversary Boss Bundle plus $30 in shipping for a total of $329.

Lords of Vegas 10th Anniversary: Underworld and Boss Bundle completes its Kickstarter on Thursday, May 14th and tentatively ships in November 2020.