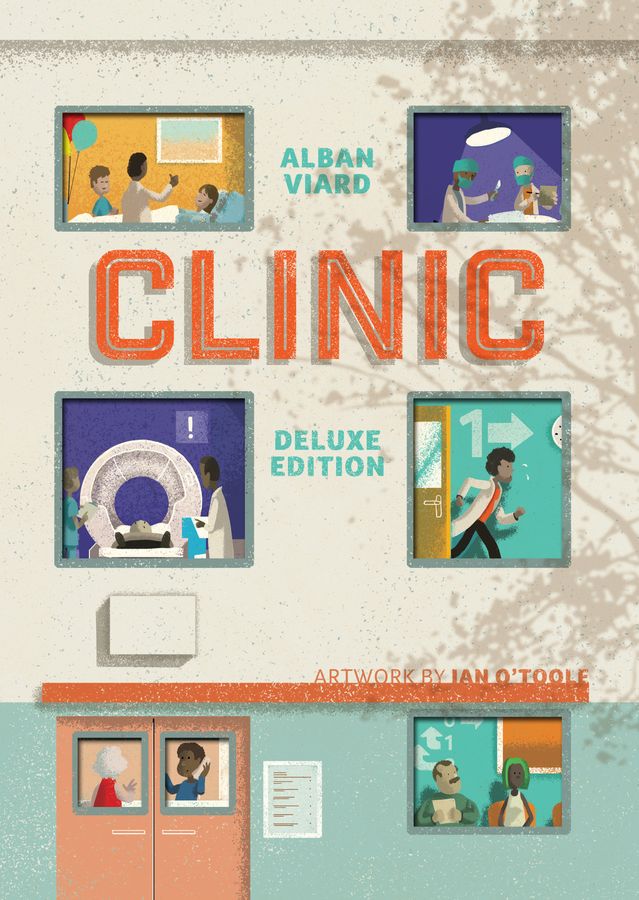 Funding Status: At the time of this posting, Clinic: Deluxe Edition is already fully-funded.  In fact, pledges currently total more than 7x the initial funding goal.

What It’s About: This new version of the heavy hospital simulator Clinic features stunning new box art, rewritten & revised rules (including one set for beginners and another for experts), incredible new art and design work from Ian O’Toole, and an expansion that collects all previous Clinic mini-expansions and additional content.

How It Works:  Games take place over 6 rounds, featuring 3 phases each: Actions, Business, and Administration. In the Actions Phase, players simultaneously choose sets of actions three times per round. These include Building, Hiring, and Admitting Patients. Players have 2 tokens for each action, so in a given round they can perform each action once, or one action once and one action twice (but not one action 3 times). In the Business Phase, players evaluate Patient Care and Income, Expenses, and Popularity. Finally, the Administration Phase is a bookkeeping phase where players make some adjustments to their player boards, the main board is restocked with certain items, turn orders resets, and the round marker advances. Final scoring involves gaining points for various types of employees, treatment rooms, and buildings, while losing points for various types of patients still under the player’s care as well as time spent over the course of the game.

Comparisons: The easiest comparison, because of the Ian O’Toole art and design work, are his collaborations with Vital Lacerda: Escape Plan, The Gallerist, Lisboa, On Mars, and Vinhos Deluxe. Chunky Euros, all.

KS Exclusives:
None. Although as Alban Viard notes, the first print run of Clinic was a quick sell-out. They’re not planning on producing lots of additional copies, and it’s possible there won’t be any going to retail at all. If there are, MSRP will be set at $69. Since Viard has made no statement about the Extension expansion, and it obviously won’t be included with the base game, it’s even less likely you’ll be able to find that part of the game at retail.

Clinic Deluxe Edition completes its Kickstarter on Friday, May 31st and tentatively ships in December 2019.