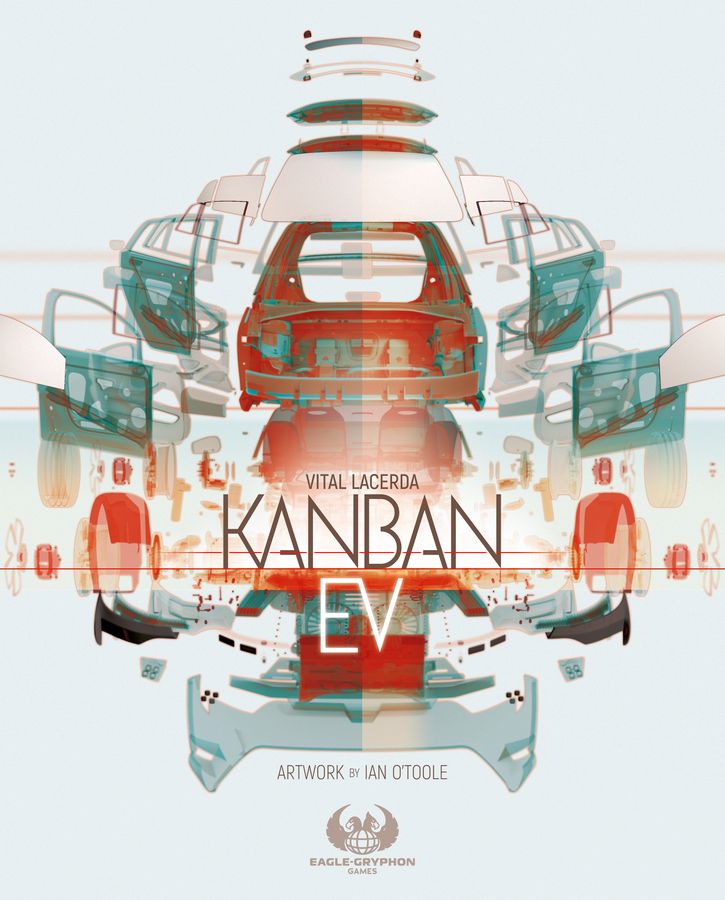 Funding Status:  At the time of this posting, Kanban is already fully-funded. Pledges currently total almost 5x the initial funding goal, with just less than 7 days left to go on the campaign.

What It’s About:  “Kanban EV focuses on resource and time management, putting the player in the driver’s seat of an entire production facility, racing for factory goals and the highest level of promotion.  Players take on the role of rookie employees trying to secure their careers. They need to manage supplies and suppliers, improve and innovate automobile parts, and get their hands greasy on the assembly line in order to boost production and impress Sandra, the factory manager.”

How It Works:  “The game is played over a series of rounds with each round representing one day of work in the factory. Each day is comprised of two phases. In the Department Selection Phase, players take turns choosing a workstation in a department where they want to work. In the Work Phase, players use their Shifts to work and/or train in the department they chose, in department order.  After the end of the Work Phase and before the End of the day, there may be a Meeting. This process continues until there has been a certain number of Weeks and Meetings and, after final scoring, the player with the most Production Points is declared the winner.”

“Each department has its own training track which indicates the current training level of each player. When players work in a department, they can also undergo training in that department.  For each Shift spent, players move their marker one space, placing it on top of any other markers already there. Once they cross the arrow on a training track of a department, they are certified in that department. This usually unlocks something on their player board and gives some benefit within the department itself.  Each time they become certified in a department, they’ll discard the Lock from the corresponding section of their player board, move their Certification Marker to one of the empty spaces in the next section of the Certification Track, gain the benefit of that space, and check to see if they have achieved a Factory Goal.”

Departments include Design, Logistics, Assembly, Research & Development, and Administration. In the Design Department, players choose one of the Designs on the rightmost 8 spaces for each Shift spent, then move the chosen Design to one of the available spaces of the desk on their player board, keeping it blueprint-side up. If they do not have an empty space, they cannot take the Design. Being Certified in Design allows players to store 1 additional Design on their player board, as well as giving them access to Advanced Designs in the First Office and Central Stacks.

In Assembly, players Provides a Needed Part, moving a Car Part from their player board to an empty Assembly Space for any model. They can also spend a Parts Voucher, instead taking any Car Part from the supply and placing it on an empty Assembly Space, but the Car Part must differ from any others currently in the model’s Assembly Spaces.  The model must have all of the upgraded parts before any non-upgraded parts can be added. The player then moves the car at the top of the model’s assembly line one position along the arrows, which may displace other cars along the path, even off the end of the conveyor.  Then the player places a new car of the same model on the beginning of the model’s assembly line. Being certified in Assembly unlocks the 5th garage space on their player board.

In Research & Development, players Claim Cars or Upgrade a Design. To Claim a Car, the player must have a Design on their desk that matches a car on the Test Track. They choose which cars they want to claim from the Test Track, returning a matching Design depicting the chosen model from their player board to the bottom of the Central Stack for each car chosen. They must also have an empty garage on their player board for each car they take. They spend the appropriate number of Shifts to take cars from behind the Pace Car– the 1st car behind the Pace Car requires 1 Shift, the 2nd & 3rd cars behind the Pace Car each require 2 Shifts, and the 4th & 5th cars behind the Pace Car each require 3 Shifts. The player places each car in an empty garage on their Player board, flips the Garage Tile next to it, and receives the depicted benefit. They also check to see if they have achieved a Factory Goal. After finishing claiming cars, they advance the Pace Car a number of spaces along the Test Track equal to the number of cars they took, then advance the other cars to close the gaps behind it. If the Pace Car reaches or crosses a shaded space, they move the Meeting marker to the proper space in the Administration Department, indicating that there will be a board Meeting at the end of the current day.

Sandra the Factory Worker rotates around the board each day to a different department. She’ll select the player with the least training in that department to issue a Production Point penalty– -1 PP if the player meets the penalty criteria, and an additional -1PP for each Banked Shift the player has, up to 5. When Sandra performs this task in Administration, the week ends and players are then awarded with PP– for each car in their garages, 1 PP for each upgrade made to a model, and 1 PP for each Tested Design of the model. In the event a Meeting is called, players turns Speaking or passing. When Speaking, they play a Performance Goal from their hand face-up to the Meeting Room Table. They may then place 1 Speech Token on the highest-numbered empty Speech Icon of a Performance Goal where they don’t already have a Speech Token, and score the Performance Points. Players may only pass once they’ve played at least one Performance Goal, and can play one of their own Performance Goals without using a Speech Token. A player can pass, and then later choose to Speak again if the Meeting is still in session. Once all players have passed, the Meeting ends.

The Production Cycle Marker and Week Marker track the end of the game. When one of them is on the 2nd space or higher and the other is on the 3rd space or higher, the end of the game is triggered.  Players finish the day, including a possible End-of-Week Scoring, Meeting, or both; then proceed to Final Scoring. During Final Scoring each player performs the following steps: spend 1 Speech token per achievement they wish to score on the Final Goal tile; earn 1 Performance Point per Shift they have banked; earn 1 PP per Speech token (personal or Generic), Book, and Parts Voucher on their player board; gain PP for each of the cars in their garages (City Cars are worth 2 PP, SUVs 3PP, Trucks 4PP, Sports 5PP, & Concept 6PP5); gain PP equal to the value of the depicted Car Part for each of their Tested Designs; and score the relative positions on each department’s Training Track (5 for first place, 3 for second, and 1 for third; if two players are tied in a position, the player whose marker is on top is considered to be ahead, and a player who has not done any training in a department cannot earn any PP for this step). The player with the most PP is the winner with ties broken by the player with the most cars, then by the player with the most Tested Designs, and then by the player with the most Banked Shifts.

Comparisons:  Vital Lacerda’s games are some of the more complex games out there, but the style of his design and their gameplay bear a lot of similarities to one another. Once you learn how to play one Lacerda game, it becomes much easier to learn another. Additionally, most of them feature artwork by Ian O’Toole, so they share a similar look despite the differences in theme. And O’Toole is very good at creating iconography that is not only logical to the theme of the game, but that creates a lot of “aha” moments, adding to both the gameplay and depth of theme. The more you play these games, the more intuitive they become, and the more the cleverness of their design can be appreciated. The best comparisons here are to other Lacerda/O’Toole collaborations: CO2: Second Chance, Escape Plan, The Gallerist, Lisboa, On Mars, and Vinhos. All but CO2: Second Chance are published by Eagle-Gryphon games, giving most of them a similar look in terms of box design and size.

If, on the other hand, you’re simply looking for automotive-themed games, a few good ones out there include the complex commodity speculation Automobile, the medium-light tile placement and worker placement Automania, and the medium-light time track and set collection Kraftwagen.

KS Exclusives
This is a bit unclear. But as with other Eagle-Gryphon games, it’s unlikely the Metal Car Add-On or any of the stretch goals will be included with retail copies. These items include the Speedcharger Expansion, Special Garage Tile Expansion, Metal Pace Car upgraded round marker, and extra Final Scoring Tiles.

All-In Total: Let’s forget about the additional Lacerda games and the $2 card for Lisboa, as well as the First Off the Assembly pledge level with expedited shipping. In the continental U.S., you’re then looking at $159 for the Factory Manager pledge plus $17 in shipping for a total of $176.