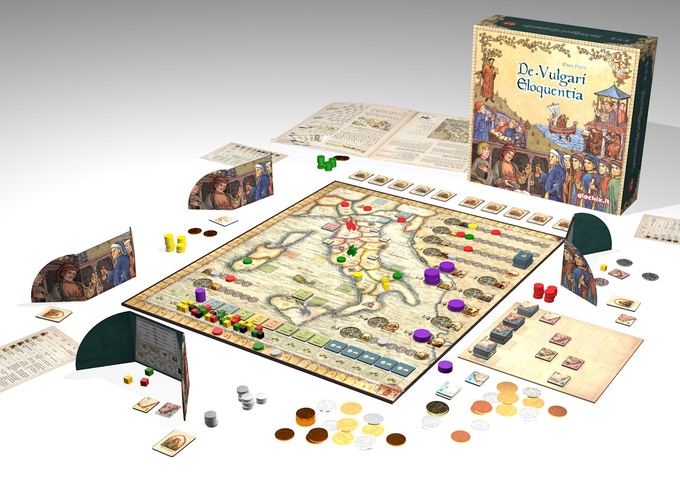 What It’s About: This heavy Euro features players competing to help develop and empower the Volgare common language as an alternative to the elite-controlled Latin in the late Middle Ages in Italy.

How It Works:  The game takes place over 13-16 turns, depending on when the Pope turns up dead from the Event Track. Each turn proceeds through the Event, Charity, and Turn Order phases before the Actions phase. In the Actions phase, players can: move around the board; take and learn Manuscripts; take cubes representing Politicians, Noblemen, Abbesses, and Scribes; collect 10 Ducati from the bank; advance along the Knowledge, Riddle from Verona, Messenger, Orient, Canticle, and Papal Library tracks; and Rest. End game scoring involves a point salad from various mechanics, but they largely have to do with scoring points for placement on the many tracks, various collections of Manuscripts, and trading cubes in to increase from Title to Title.

Comparisons: The board has a classic look to it reminiscent of El Grande, but this isn’t an area control game. It’s a mostly heads-down multiplayer solitaire and engine-builders with some opportunities to influence other players. There’s the mechanic of taking cubes that could remind one of Village, but instead of trading them in for goods, they’re used in the end-game from behind player screens in what also feels like a very classic, old school Euro move. The point salad of scoring as well as the variety of tracks may suggest Uwe Rosenberg, but again, the design and artwork definitely feel rooted in an older, more classic style. Perhaps the best comparison I can make are the various mechanics of a game like Tzolk’in: The Mayan Calendar with a more classic design style.

What Should I Pledge?:
$30 Upgrade Pack: for those with the old edition. It includes: metal coins, customized meeples, the Ritmo Bellunese expansion, and the unlocked stretch goals with the red angle mark (which is all of them save the Display Board).
$54 Stupor Mundi: the new Deluxe Edition of the game, the Ritmo Bellunese expansion, and all stretch goals.

KS Exclusives:
The Upgrade Pack itself, including the ability to “Deluxify” the old version of the game, is a Kickstarter exclusive and will not be available at retail. The retail version of the game will also not include the card expansion or the additional tiles unlocked with stretch goals, and it will have a suggested MSRP of $65-70.