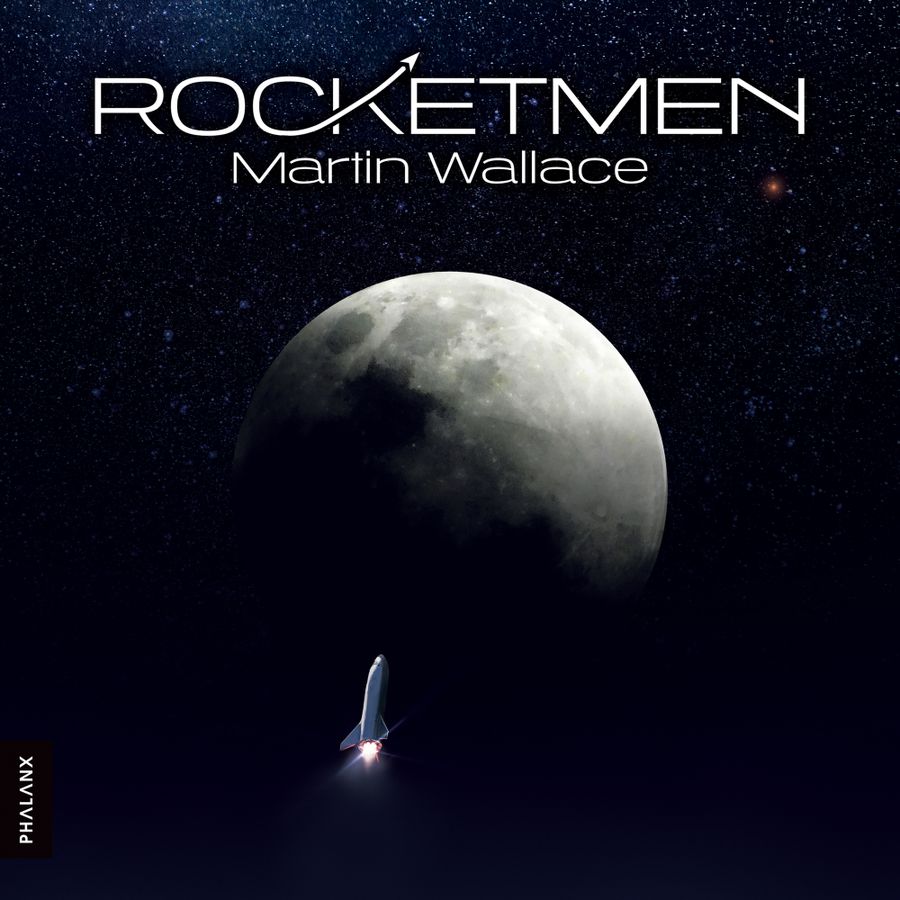 Funding Status:  At the time of this posting, Rocketmen is already fully-funded. Pledges currently total more than 2x the initial funding goal, with 7 days left to go on the campaign.

What It’s About:  “A deck-building confrontation of swift decision-making and tactical choices, Rocketmen gives you the feel of taking a front seat in a technologically wonderful spectacle of space exploration. It’s up to your predictive abilities and resource management skills to determine what kind of endeavor would be most suitable for paving the way to Earth’s celestial neighbors. It doesn’t matter whether it would be a low Earth orbit satellite or a manned base destined for the Red Planet; plan your mission carefully, equip your shuttles and rockets craftily, yet do not hesitate when your gut instinct tells you when it’s time to launch!”

How It Works:  “Players gain Victory Points by successfully launching various space missions with main objectives to explore three celestial destinations: Earth Orbit, the Moon and Mars. The game ends when one of the players scores a certain number of Victory Points, or all 12 space missions have been completed, or if a player chooses to end the game by placing their fifth or sixth token resulting in each destination having at least one mission completed. Every successful mission gives players considerable perks: additional rocket points, extra cash, increased hand size, and supplementary resources. These, in turn, help them prepare more easily for their future missions.”

“Players take turns in clockwise order around the table. The active player may do as many actions as they wish, in any order.” Available actions include: buying cards from the display, placing cards on the launch pad, discarding card, and launching a mission.

At the end of a player’s turn, “if you finish your actions, move all cards from your Playing Area to your Warehouse. Draw cards from your HQ to refill your Hand back to your hand limit (which starts at six, but can be increased). If you have more cards than your hand size, then discard excess cards to your Warehouse. If there are not enough cards in your HQ, then draw as many as you can, and then shuffle your Warehouse to form a new face-down HQ deck, and draw the rest of the cards to your hand limit. If there are still not enough cards, you don’t draw any additional ones. Flip all your used tokens back to their color side. Slide all replacement cards on the display upward, so the display cards are all aligned.”

When the game ends, the current round “is played to completion, i.e. until the player just before the player with the First Player marker finishes their turn.”

“At the end of the game add additional VPs from any:
1) Bought cards that give you VPs, e.g. Threat! – each is worth 2 VPs. If you removed a Threat! card from the game you still gain its VPs at the end of the game.
2) Moon and Mars tokens (one VP for each token).
3) One of your Personal Goals. You can score VPs from only one of your Personal Goal cards; choose one and forfeit the other one.
4) Variant Cards (as stated on each particular card).
The player with the highest score is the winner. If there is a tie, the tying player whose mission is the farthest wins (Mars Base > Orbital Mining > Mars Crewed Spaceship > Moon Base > and so on). If there is still a tie, the one who completed more missions wins.”

Comparisons:  While being a space-themed game and featuring miniatures, Rocketmen is more rooted in science than science fiction. You won’t encounter aliens, space combat, or any of the more absurd elements of Terraforming Mars. It also seems lighter than Vital Lacerda’s recent Kickstarter project On Mars, concentrating squarely on the central deck-building mechanic and completion of missions. It’s certainly heavier than the Splendor-esque Space Explorers, but nowhere near as obtuse as something like Phil Eklund’s High Frontier. Think Eminent Domain without the civilization-building, Space Alert without the cooperative element, or perhaps One Small Step without the worker placement.

Rocketmen completes its Kickstarter on Wednesday, February 5th and tentatively ships in October 2020.