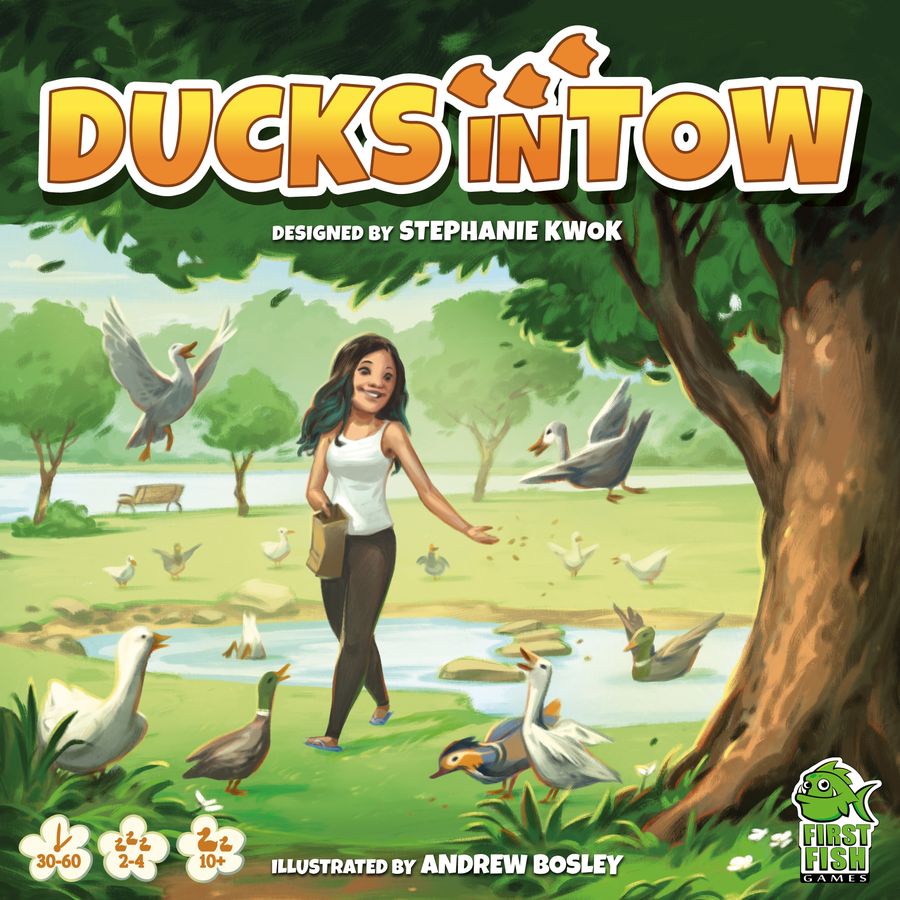 Designer: Stephanie Kwok (Get Off My Land!)

Funding Status: At the time of this posting, Ducks in Tow is already fully-funded. Pledges currently total about 1.3x of the initial funding goal with just over 2 days left to go in the campaign.

What It’s About: A pick up and deliver and set collection game involving feeding ducks at the Duck Sanctuary.

How It Works: “In Ducks in Tow, you are walking around the park feeding the ducks their favorite food. When you feed them, they start following you and you must lead them to their favorite locations in the park. When you successfully lead them to their favorite location, you take a photo with them and they waddle off to find their friends. Maybe you’ll see them again later as you continue your walk around the park. You will be completing Location Cards that will gain you points at the end of the game. Once you have completed a few Location Cards, you might be able to claim a Formation Card,which will give you additional points at the end of the game.”

On their turn, players may take up to 4 Actions in any order or combination. Basic actions include Moving (from the Player Pawn’s current location to an adjacent tile), Feeding (spending 1 food per duck, in a Food color that matches each duck’s color, to recruit them into the Player Pawn’s tow), Shake the Bag (Randomly drawing 1 Duck from the bag, adding it to the player’s Tow if they have a matching food or “dispersing” it onto their tile if they don’t have a matching food or choose not to spend it), and Dropping Off (1, 2, or 3 Ducks that match the ducks on a Location Card with an icon matching the one on the Location Tile). Tile Actions can be taken when the Player Pawn is on a Specific Location tile, including The Gift Shop (the player gains up to 2 Food of their choice from the Food Bag, discarding back into the Food Bag down to 4 if drawing causes them to exceed 4 Food; or Drawing up to 2 Location Cards, discarding back down to 4 if they exceed 4 Location Cards) and Adopting (Removing 2 Ducks from the Tow, to be dispersed onto tiles with the least number of Ducks and no Player Pawns at the end of their turn, and placing 1 Duck onto one of their Location Cards if they so choose). Whenever a player completes a Location Card or Adopts a Duck, they may also claim a Formation Card if they have a matching duck pattern on their Location Cards). At the end of their turn, a player may discard any number of food back into the Food Bag, then draw back up to 4; draw back up to 4 Locations from the face-up cards of the top of the deck; and then passes the Food Bag to the player on their left.

At the start of the game, a number of Formation Cards are randomly laid out equaling the player count plus 2. The end game is triggered when a player has 6-8 Location Cards in their tableau (depending on player count) or when the last Formation Card has been claimed. Each other player then gets one final turn. During Final Scoring, players earn points for the longest connected row across their Location Cards of each duck color, as well as for any Formation Cards they claimed over the course of the game. Ties are broken by the player with the longest connected row of ducks, then by the second-longest row of connected ducks.

Comparisons: Black Orchestra, Coal Baron, Container, Forbidden Island, Genoa, Hansa, Keyflower, Macao, Merkator, Pandemic Legacy: Season 2, and Whistle Stop all feature a combination of pick-up and deliver & set collection, and Forbidden Island and Keyflower also feature modular boards. The highest-rated bird-themed game out there right now is Wingspan, but the only mechanic it shares with Ducks in Tow is set collection. And despite the fact that Wingspan is not an overly complex game, it still features more mechanics and is a heavier game than Ducks in Tow.

What Should I Pledge?:
$35 One Fell Swoop: a copy of the base game, the The Angry Goose Mini-Expansion, and all unlocked stretch goals.

All-In Total: In the continental U.S., assuming you’re not looking to purchase additional copies or additional games, you’re looking at $35 for the One Fell Swoop pledge plus $6 in shipping, for a total of $41.

Ducks in Tow completes its Kickstarter on Thursday, December 19th and tentatively ships in June 2020.