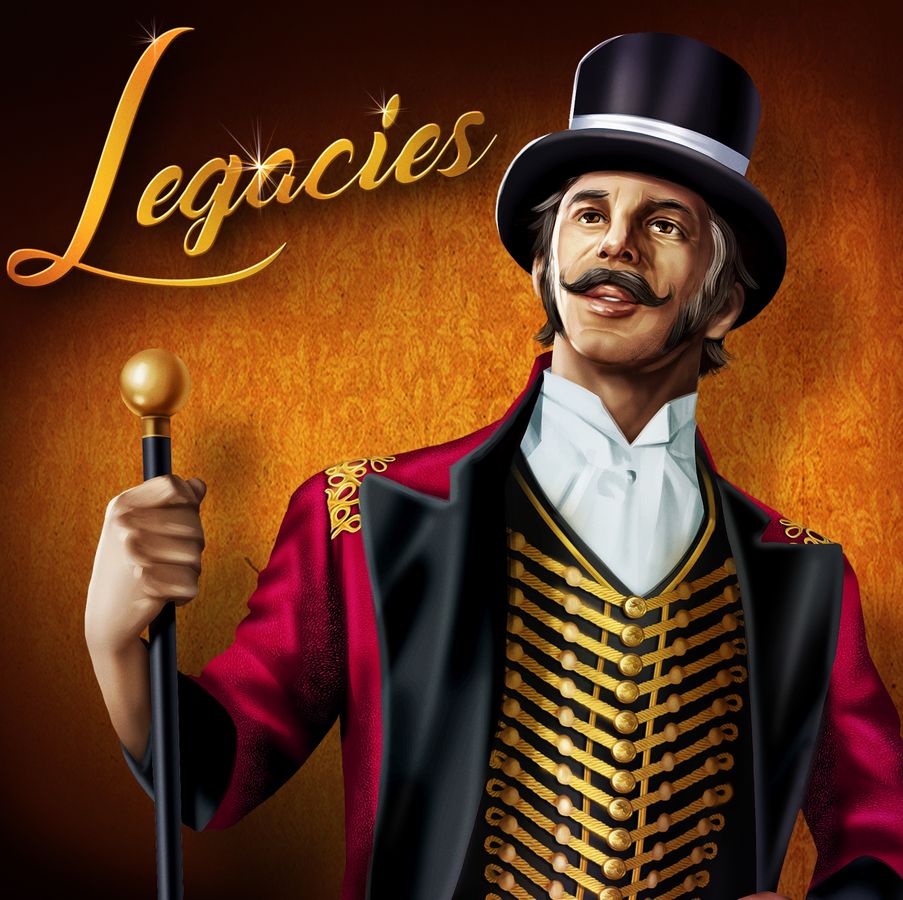 Funding Status: At the time of this posting, Legacies is already fully-funded. In fact, pledges currently total almost 3x the initial funding goal with 7 days left to go on the campaign.

What It’s About: “Legacies is a mid-heavyweight, strategic, thematic Eurogame for 1-6 players spanning the past, present and future. Choose from one of ten unique characters from the early 19th century and build their legacy over 300 years.”

How It Works: Players compete to earn the most fame over the course of 6 Generations (or 3 Centuries, 2 Generations per Century) by making relationships, investing in industries, contributing to their Foundation, collecting heirlooms, controlling events, and choosing successors. Each Generation ends after a specific number of Mandatory and Non-Mandaotry Global Actions have been played.

At the start of each Generation, players determine turn order based on Foundation size, move the upcoming Event to the Current Event space and place the next Event card from the deck into the Upcoming Event space, deal 3 Player Cards from the current Century to each player, deal 3 Player Cards face up along the right side of the board to make the Player Card Market, and turn 2 Successor Cards face up along the lower right side of the board (except in Generation 6). Then, in player order, players take turns either a) performing a Player Action using a Player Card or b) Triggering a Global Action (which can only be done once a player has played at least 2 Player Cards in the current Generation). Players can take player actions either using a Player Card from their hand, or by swapping a card from their hand with one in the Player Card Market. Player Actions include Making Relationships, Buying or Selling Investments, Taking Opportunities, Exploring the City, Obtaining Resources, and Acquiring an Heirloom.

When Buying or Selling Investments, the active player plays a card with the Industry they wish to buy or sell, indicating whether they’re buying or selling a minor investment of 2 shares or a major investment of 5 shares, and then paying or collecting the gold equl to the current value of the Industry multiplied by the number of shares involved in the transaction.

When Exploring the City, players collect the amount of Gold shown for each Player Card they’ve played during the current Generation, and if they haven’t yet put a Successor in play this Generation, they’ll draw 2 (in Generation 6, they’ll simply collect Gold instead).

Obtaining Resources simply requires the active player to play the Player Card and collect the Resources depicted on the bottom of the card.

When Acquiring an Heirloom, the active player plays the associated card and pays the listed Resources to the bank. If the Heirloom is not one of the player’s own, the must also pay an Acquisition Fee.

Each Generation ends after a certain number of Global Actions have been triggered, depending on player count. Players remaining on the turn track after the player who ended the Generation earn, in turn order, their choice of 10/20/30 gold, 5/15/25 Foundation points, or 1/2/3 resources. Then, in Generations 1-5 only, players who did not put a Successor in play that Generation must do so from their hand if possible, and if not, from the top of the deck. All Global Actions are turned face up, and the Player Card Market is discarded along with all played Player Cards.

At the end of each Century (every 2 Generations), all Player Cards from the current Century are removed from play (including from players’ hands). Players score Fame based on the top face-up Century-End Scoring Tile and then flip it face-down. After Centuries I and II, players also turn the Legendary Figure for the next Century face up, and place relationship, investment, and exploration overlays on the board for the next Century. At the end of Century III, players perform the Game End Steps. These include scoring Fame based on the size of their Foundations (1 for every full 25 in their Foundation); players also score Fame based on the Game-End Scoring Tiles in play. The player with the most Fame wins, with ties broken by the player with the largest Foundation, and then by the player positioned earlier in turn order.

Comparisons:  The way cards disappear after the end of a Century certainly begs comparisons to Through the Ages. However, the mechanic where players choose their alignment at the start of the game is fairly unique for a board game. Players can also choose whether to be a good guy or a bad guy in the sandbox game Western Legends, and in most pen and paper role-playing games. The array of mechanics and variable player powers may also call to mind the likes of Tapestry or Vindication. Like Tapestry, Legacies has civilization-building elements, yet does not position itself as a civilization game. And like Vindication, there are many different pathways and strategies to success, though where Vindication veers a little more towards Ameritrash, Legacies leans closer to its Euro roots.

Legacies completes its Kickstarter on Thursday, December 5th and tentatively ships in December 2020.