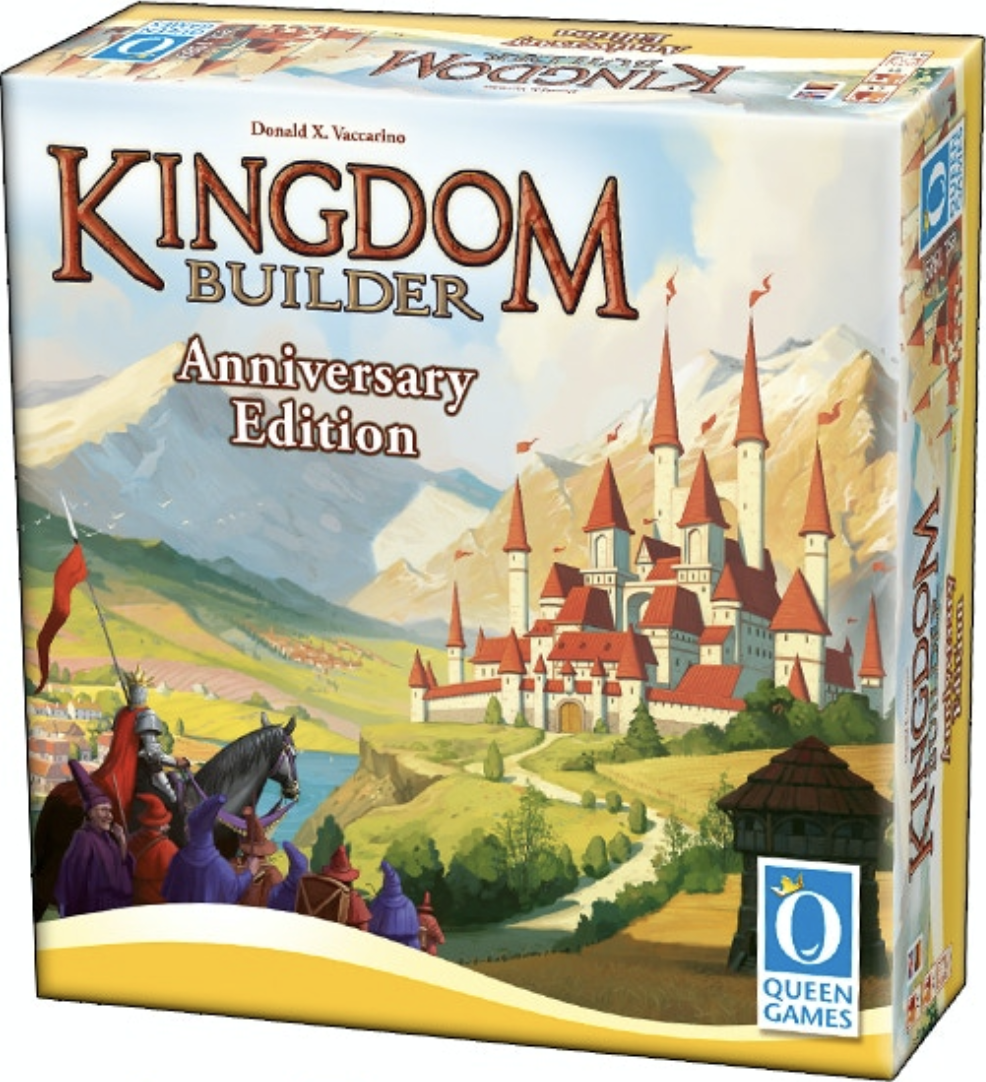 Summary: “The 10th Anniversary edition of Kingdom Builder features 28 printed resin ability tiles, 212 plastic miniatures, 8 game board sections with new art, 30 extra large terrain cards with new art, and 4 Queenies, including The Emperor’s Choice (first seen in Kingdom Builder: Empire Edition). In Kingdom Builder, players create their own kingdoms by skillfully building their settlements, aiming to earn the most gold at the end of the game. Nine different kinds of terrain are on the variable game board, including locations and castles. During their turn, players play their terrain card and build three settlements on three hexes of this kind. If possible, a new settlement must be built next to one of the player’s existing settlements. When building next to a location, players may seize an extra action tile to use from their next turn on. These extra actions allow extraordinary actions such as moving their settlements. By building next to a castle, players will earn gold at the end of the game, but the most gold will be earned by meeting the conditions of the three Kingdom Builder cards. These three cards (from a total of ten in the game) specify the conditions that must be met in order to earn the much-desired gold, such as earning gold for your settlements built next to water hexes, or having the majority of settlements in a sector of the board. Each game, players use a random set of Kingdom Builder cards (3 of 10), special actions (4 of 8), and terrain sectors to build the map (4 of 8), ensuring they won’t play the same game twice.”

Funding Status: Funded; currently at 552% with 8 days to go.

Summary: “A competitive duel card strategy game for 2 players, where you create an army of dragons to defeat your opponent via one of the 5 different victory conditions the game offers. Gather dragon tribute, offer it to your favorite dragons and bring them to your side, unless your opponent offers more, triggering an auctioning mechanic. Manage your dragon tribute economy wisely, bid intelligently and don’t over-spend too much. Keep your opponent’s dragons in line, grow a magnificent dragon army and accumulate majesty points to win the game by the Majestic Victory. Or if you feel stronger, attack your opponent to cut off their strategy and even win the game by the Domination Victory. There are 4 kinds of dragons: Chaos Dragons, Majestic Dragons, Primordial Dragons, and Neutral Dragons, each with a special ability. To control their will, the Dragon Lords are at your orders. They will trigger combos and will offer different advantages.”