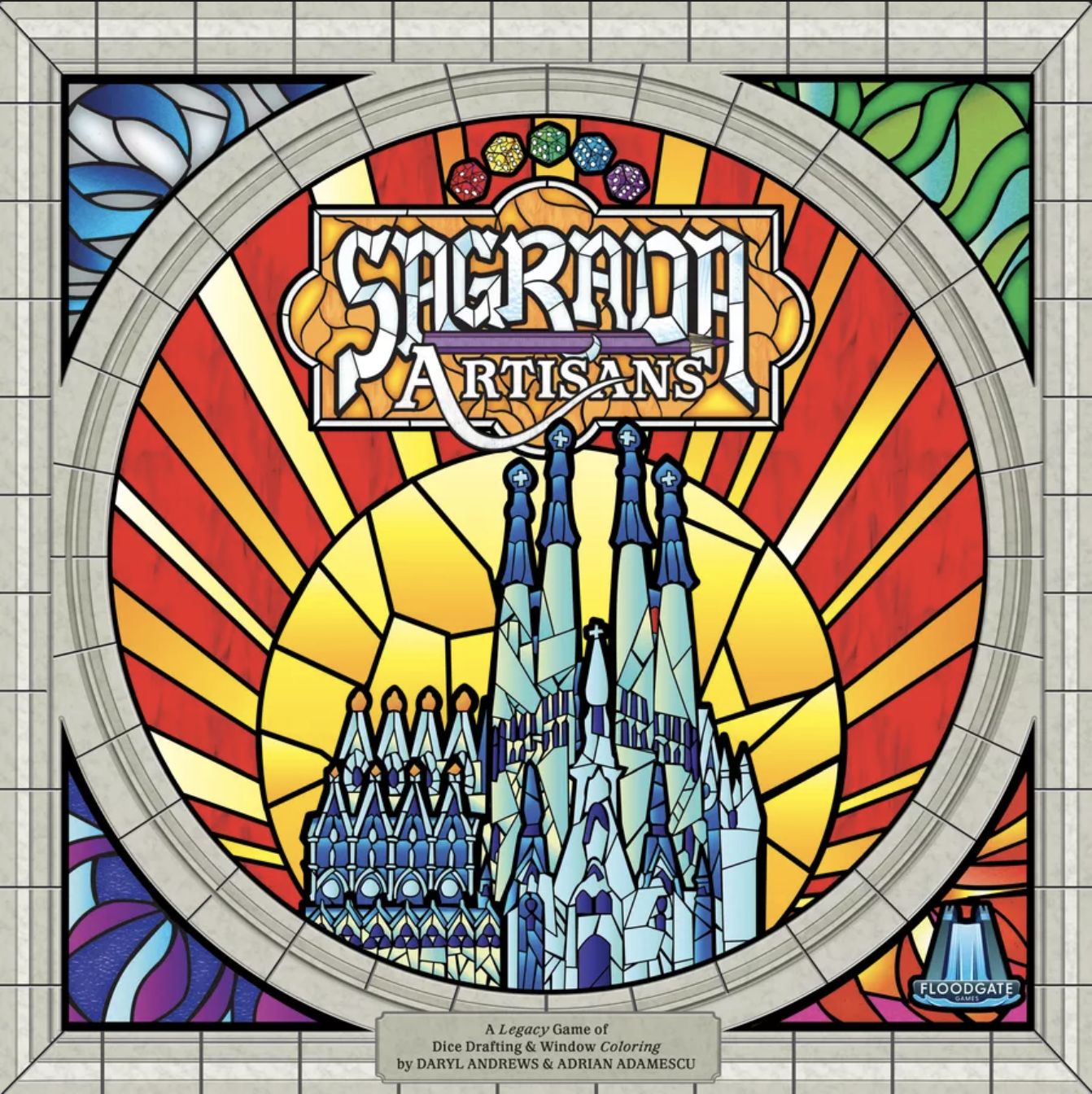 Summary: “Travel back to the second half of the 19th Century where a series of inventions is about to change where and how people live, work, travel, and communicate. Your role is to lead humanity’s charge into a bright new future. Every player selects one of the four types of laboratories. You may play as a Government Lab, a Corporation Lab, a University Lab, or an Innovator Lab. Each one offers asymmetrical powers to use to your advantage. While running the Lab, you will have the chance to purchase different Equipment made available every round. Your choice of equipment will be influenced by each piece’s ability and its cost in funds. Your equipment will also indirectly affect your order of play during every round. Most importantly, you will be able to use your funds to hire legendary inventors like Tesla, Marie Curie, or Einstein himself. Every inventor has their own unique abilities that might just give you the edge against your opponents. Then you need to conceive of the right invention from the inventions offer by spending your most valuable resource, ‘Ideas.’ To complete each invention, you will need to spend the necessary scientific resources (physics, chemistry, or engineering) required by the particular invention. Use your lab assistants as workers and place them on the locations available to research and gather these resources. These locations can either be on your lab or with the inventors you and your opponents have placed on the board. Then, all you need to do is to find an available inventor to invent your invention. Unsurprisingly, you will need an engineer for an engineering invention and so on. By completing inventions, you not only gain their unique instant ability, but you also advance humanity’s progress in different tracks: Industrial, Economic, and Academic. The player whose laboratory contributes the most to society will be crowned the winner at the end of the game. However, there is much more than meets the eye. You may gain secret victory points by cleverly placing inventions on the board and gaining Breakthrough Tokens, or gather experiments to fulfill. There is also the Ingenuity rank that affects most parts of the game where you may advance, but at a cost. Experience a strongly replayable game with a different pattern of inventors and inventions created every time. Breaking News cards spice up the game by altering the rules of each round just a bit to make it more interesting. Age of Inventors combines Worker Placement and Action Selection mechanics with an interesting blend of asymmetrical power use from your Lab and Inventors, and eventually tile placement of Inventors and Inventions.”

Summary: “To conclude the Clinic: Deluxe Edition series, I wanted to focus on the disposal and recycling of all the refuse produced when patients are treated. This final, lone expansion is compatible with all expansions, because it merely depends on having nurses and orderlies, which are part of the base game. If you can include Janitors from The Extension, you can experience my full vision. I know the janitors already have a lot of challenging work, but as CEO of my own game, I am now adding a new role to their job description: they must tend to biohazards.”

Summary: “Humanity launched an early space-age in 1927, spearheaded by Mark Megacore, CEO of MegaCore Inc. In the years following, factions grew their power in various regions of the solar system, establishing a tense but stable status quo–until Mark Megacore announced his retirement. Now, the mega-billionaire’s entire fortune is at stake, and everyone in Sol is racing to earn it. You will take command of one of these 8 factions and do your best to bring them to victory. The path you choose is up to you–- and could lead to unimaginable riches. But like all things, accomplishing your mission is easier said than done. To impress Megacore, your ship must travel from planet to planet by spending energy onto the board. But moving into a sector costs energy equal to the amount already in the sector plus one. Because the energy cost is exponential, the board locks down fast. And your ship can only recharge on one planet: Mercury. So while you may need to travel all the way to Neptune, you also need to make sure you can make it back. Each player only gets one movement and action per turn. Actions include using Mars to upgrade your ship, obtaining explorers at Venus, picking up secret objectives at Saturn, and more. But many actions cost resources, which can only be mined from asteroids. Each round, a limited amount of asteroids are placed on the board. Getting to them before your competitors is key. When a player can’t take a movement or an action, they must pass. When all players pass, the board is cleared of energy and the race to planets and resources begins again. At the end of the third round, the game ends and you total up your victory points from machine upgrades, explored exoplanets, secret objectives, and resources. Knowing this, you may want to come up with a plan and stick to it. But just when you think you have your strategy figured out, a number of things might stand in your way–- or help you cross the finish line.”

Summary: “A cooperative survival board game set in a dark sci-fi setting. Each player chooses a unique faction and will have to fight against the odds and the incoming threat in order to survive. Collaborate with your teammates and experience the increasing difficulty and unique mechanics of Horizon First Contact.”

Funding Status: Currently at 5% with 28 days to go.

Genre/Mechanisms: fantasy, i cut you choose

Summary: “A group of adventurers has just left town after clearing out a nearby dungeon. The townsfolk have worked up the courage to go see what valuable loot they may have left behind. An asymmetric grid of cards featuring different types of loot is laid out. The first player splits the grid along any single straight line between cards, claiming one set of loot cards for themselves. Each successive player can choose to further divide any pile in play. If another player has laid claim to the pile you choose to split, that player is ‘kicked off’ that pile of loot and will take another turn. If turn order returns to you without you having been kicked off your loot selection, you keep those cards. Once everyone has collected their loot, and organized it by color, players draft a merchant card, each with different scoring mechanisms. Each merchant is assigned to a color of loot, with their scoring mechanism only counting towards the loot collected in that color. Players move to the next room in the dungeon (represented by a new loot card configuration being laid out) and repeat the process of cleverly splitting loot and looking to draft the most useful merchant. After 5 rooms of loot have been split, players score each color of loot based on the merchant assigned. Most points wins.”

Artist: Roxy Dai (Age of Galaxy, Eila and Something Shiny)

Summary: “An American-style war game set in a fantasy world. Elementis, a land blessed with mystical elements and ancient magic, is guarded by The Great Sorcerer with his astonishing power throughout the years. In every duo luna year, the Great Sorcerers’ Tournament is held at the Enchanted Forest where the winner will be awarded the secret to magic mastery as a successor in title. The competition is dangerous and courage is no guarantee for survival – attack or defence, spells will be cast and battles are inevitable. Dazzling blast of magic between the GU towers will not cease until the last man stands and wins the seat as The Great Sorcerer. You as a sorcerer will grow mysterious mushroom GU, use potions, learn spells to upgrade your sorcery, and battle with other sorcerers for the most influence to win.”

Summary: “Featuring art inspired by vintage cartoons from the 1920s and 1930s. For 10-15 minutes per game, players will use their dice to explore a haunted house, loot treasures and catch spooky ghosts before fear takes over and forces them to flee with whatever they have collected. During your turn, you will roll 7 dice and use 1 of the movement dice to enter a room in the house, then use the rest of the results to find and collect treasures, or to create a portal to trap ghosts with. Every treasure and ghost is worth points. By spending some of the collected resources, you will be able to perform special actions, such as re-rolling the dice or changing the value of a die. You will also have a dice reserve where you can store up to 3 results that you can spend and use at any time during the gameplay. The game ends when the Scare-o-meter counter reaches the end. The player with the most scored points wins the game. You can also play using the mission cards, which will demand you to collect specific resources before the game ends.”

Summary: “A legacy game take on the stained glass window game Sagrada. Players will compete as rival families of stained glass artisans, who work on the Sagrada Familia’s windows over the course of generations. Players will gain powerful new abilities over the course of the campaign along with brand new tools. Other gameplay details about the new game are relatively sparse, but the game involves a spiral notebook and colored pencils instead traditional game boards.”

Summary: “Play as the crew of the Spark, the spaceship equipped with the most advanced AI in the universe. Your mission is to deliver precious cargo to the four corners of the galaxy to ensure the survival of humanity. Beware, alien pirates and hostile environments await you, so only the best will arrive in one piece. Spark Riders 3000 is a hybrid single player / cooperative tower defense and survival game for 1 to 4 players in which players must coordinate their actions to ensure the success of their mission. Each scenario is different and you will have to adapt quickly to avoid seeing your ship destroyed and its cargo intercepted by alien pirates. The goal is simple: reach your delivery point without having one of the ship’s vital rooms destroyed.”

Summary: “In Valroc, you play wizards in competition to acquire the Archmage title. For that, you will have to defeat terrible creatures (or tame them). The first player who has defeated or tamed six creatures ends the game. The winner is the player with the most Prestige Points. The game is split into two different phases: the first is a draft phase in which the players must select the creatures they will have to fight, preparing for the tournament as well as possible; the second phase is the tournament itself, in which players fight against each other by using a worker placement mechanism.”