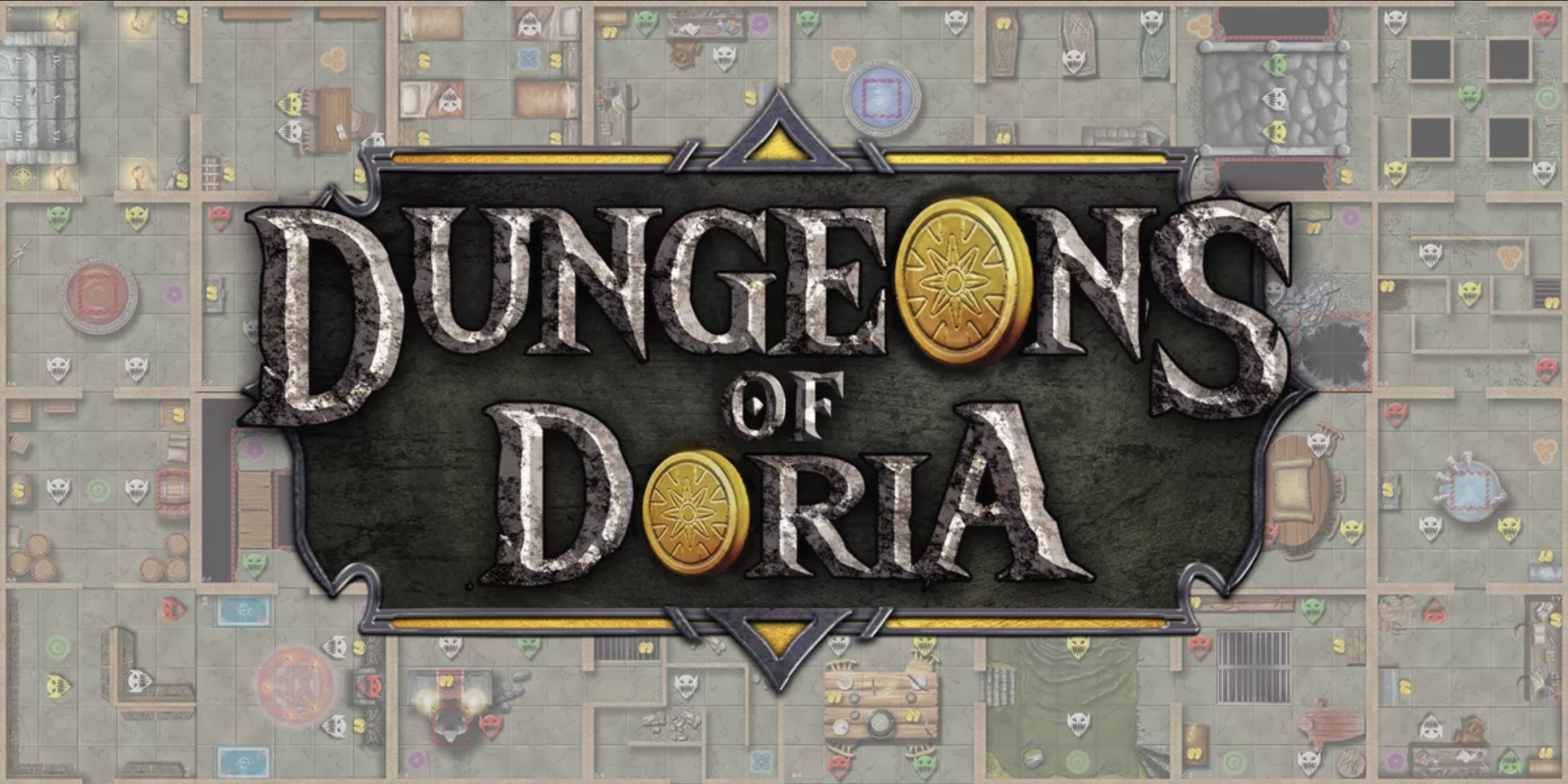 Summary: “A cooperative dungeon crawler set in the fantasy world of Doria. You are heroes, mercenaries and vagabonds, drawn from far flung corners of the continent Doria, seeking adventure, glory and gold. The vastness of Doria teems with dungeons, towers and cellars crammed with monsters, treasures and ancient artifacts. Work together to survive terrible perils and escape the dungeons of Doria. Dungeons of Doria is played without a game master. Select a quest and start exploring a dungeon. Either choose from standalone adventures you complete in one session or pick one of the four included campaigns continuing over multiple scenarios. The Dungeons of Doria Initiative System allows each character to spend their initiative points on multiple actions such as moving, attacking, looting or repairing damaged equipment. The character or monster with the highest initiative value defines the next action. Each player must decide on what to do: use several quick actions, one slower action or a combination – depending on the items equipped. Plan tactical fights, disarm traps and manage your inventory of loot. Over 400 unique loot cards, 19 opponents each with their own abilities plus monster modifiers and 8 initial characters that can be completely customized as you wish.”

Summary: “Imagine a raceway that begins in the woodlands. Typhon, Angrboda, Arachne, Tiamat, Grendel, and Qilin are lined up and ready to compete in a marathon to the volcano. The breeze seems to rot and die from the festering tension, sensing the oncoming rampage that will shake the world. Typhon bursts from the forest with his hundred dragon heads scrambling over each other, creating havoc to disrupt his competitors. Angrboda wields her frost giantess magic to freeze the others with Fimbulwinter cold. Arachne, ever patient, takes her time to weave and scatter web traps far in the distance, beyond the sight of those without eight eyes. Tiamat, unwilling to risk another defeat, unleashes her ten monstrous children throughout the battlefield to ambush her foes and help her when she needs them most. Grendel, the living dreadnought, bashes his way past the others, refusing to be slowed. And the Qilin, well…this dragon deer doesn’t care about the violence, opting to prance ahead, helping whoever they feel like, swaying the tide of the race with benevolent magic. Each character has 6 abilities that match your dice roll, so you’ll have to use what you get to survive the 40 spaces to the end. Some abilities will give you tokens for wards, curses, or traps. When you use an ability that gives you a token, select one with a number that matches the ability. During each turn, you will have two separate rolls of a six-sided die. You roll a die for an ability at the beginning of each turn. The number you roll determines the ability you get to use. After you’ve used your ability, you roll a die to move on the board.”

Funding Status: Currently at 2% with 28 days to go.

Summary: “A team vs team semi-cooperative deck-building game using the Second generation (2021) Tech Deck, a 21st century deck of playing cards. Players divide into two teams and share a play deck and group hand. Each individual player has asymmetric abilities from their venture (Tech Deck cards) that can develop over time. Teams compete to assist customers from the Customer deck. Successfully assisted customers can be used to: build up their team’s deck, develop individual ventures, or score. Rules for odd-number of players and solo-play are included. The theme of the game is a 21st century modern setting. Players on a team cooperate together. Teams may choose to cooperate and negotiate and assist customers (semi-cooperative) leading to lively group discussion and dynamics. The game uses simple math and card melds to determine who successfully assists customers. There are three mutually-exclusive competing objectives: to develop your team’s deck, to develop individual player’s venture, and to score customers. Teams compete to assist customers and then the team must choose how to use that customer card towards these three objectives. During a turn, players can uses game effects from their hand cards and their ventures. Both teams try to assist customers in the customer row drawn from the customer deck. The game ends when there are no more cards left in the customer deck.”