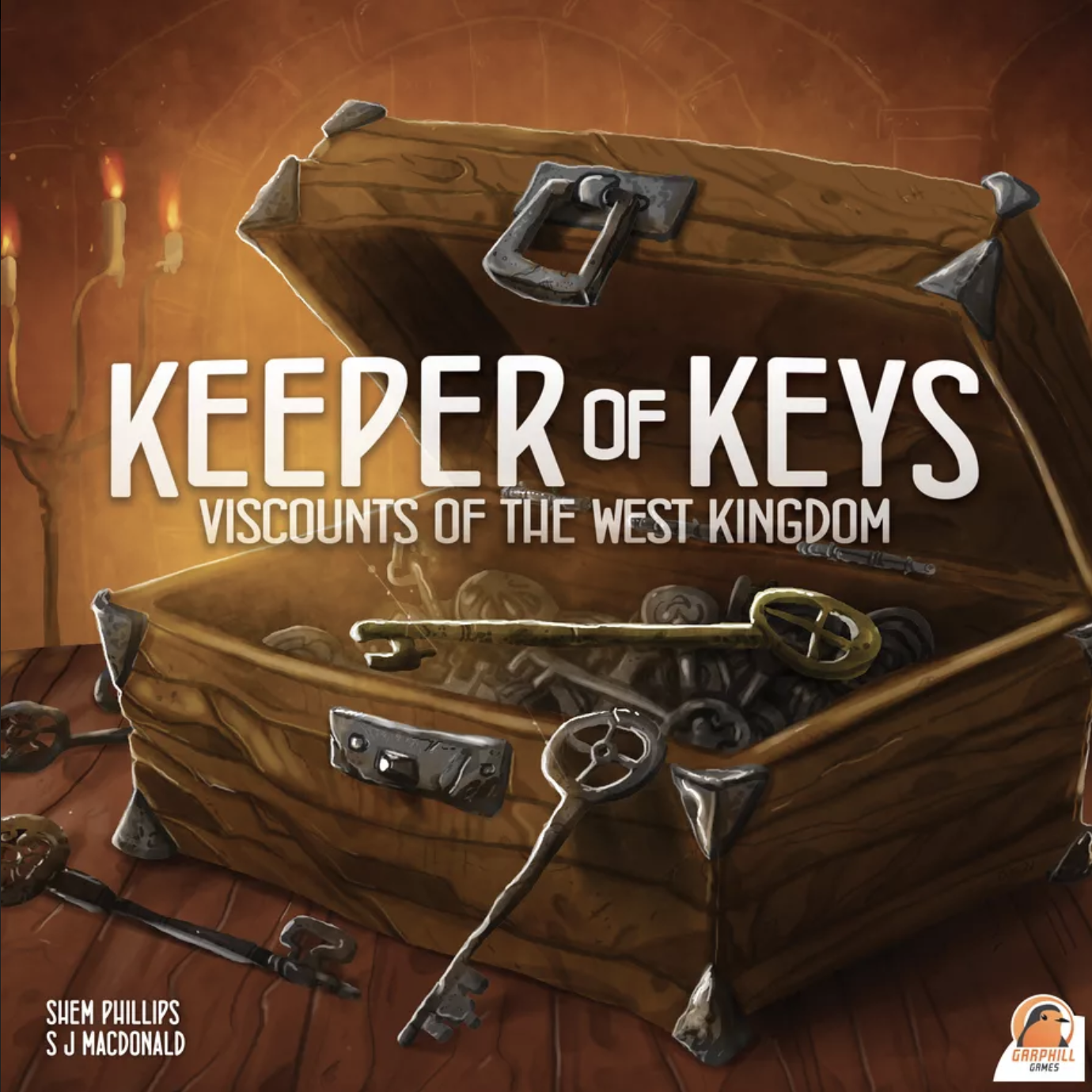 Summary: “Players compete to gain the most renown through building monster, device, or potion cards over the course of the game. Each turn you send a minion to a tower space to gather resources or return a minion. Your minions also hold your resource dice. This resource can be used by players at either adjacent laboratory location. Then you place your player miniature on a laboratory location and either put the adjacent minions to work collecting more resources or build cards according to what is available at that lab. As the game progresses the board expands giving new opportunities for all players who visit that location. Build a wide variety of monsters, potions, and devices or focus on one type to gain the most renown and win the game. CoLab employs a series of ‘take this’ mechanics where players provide resources, minions, or other opportunities to their opponents in exchange for resources or points. Balancing how much you give away with the opportunities your opponents may create is the real trick to becoming the most renowned scientist in CoLab.”

Base Pledge (w/shipping): $11 (for Palm Laboratory only; pledge does not include Colab)

Summary: “Playing on a famous horror movie trope, Final Girl is a solitaire-only game that puts the player in the shoes of a female protagonist who must kill the slasher if she wants to survive. The Core Box, when combined with one of our Feature Film Boxes, has everything you need to play the game. Each Feature Film Box features a unique Killer and iconic Location, and the more Feature Films you have, the more killer/location combinations you can experience. In game terms, Final Girl shares similarities with Hostage Negotiator, but with some key differences that change it up, including a game board to track locations and character movement. You can choose from multiple characters when picking someone to play and multiple killers when picking someone to play against. Killers and locations each have their own specific terror cards that will be shuffled together to create a unique experience with various combinations of scenarios for you to play.”

Summary: “An immersive combat exploration game set in mythological ancient Persia, challenging 4 Heroes in chronicled adventures against the Angra Mainyu, the source of all evil. There are six missions, and after each event, each player can improve their abilities and get more gifts. At the end of each chronicle, 2 events will take place, and they determine which side wins the game. Each mission takes about 60-90 minutes, and each game involves an action-packed fight where two sides face off. One of the players assumes the role of the dark side and controls the army of Ahriman. The remaining players take control of the Heroes, who must work together as a team to stop the darkness. Each side takes turns, pitting their strategies against each other in order to achieve their objectives.”

Summary: “A light and fast card-drafting racing game with huskies. Players take on the role of mushers (dog drivers) who assemble their husky sleds and race through the snowy wilderness. The players carefully select the huskies for their abilities to move over treacherous terrain and place them in the sled according to their character. They gather the equipment and train their huskies. And then the race is on. The players rely on their huskies’ abilities and the preparations they’ve taken, a combination of luck and skill that would get them the first across the finish line.”

Summary: “In Puzzle Strike 2, players build their deck as they play, giving them the tools to arrange and manipulate their set of colored gems. These gems can be ‘crashed’ (destroyed) in order to build up power for four different super moves as well as to flood other players with more gems. As this process unfolds, gems will fly back and forth between players as they desperately try to remain under the threshold of corruption. Holding the scepter ‘helps,’ but can also doom the greedy.”

Project: Rise of the Necromancers (on Gamefound)

Summary: “An evil strategy game in which each player controls a Necromancer struggling for absolute dominance. Rise of the Necromancers is based on a classic fantasy narrative with character development as well as territorial strategy. The objective of the game is to develop your Necromancer and take control of the lands. Each player starts out as an aspiring Necromancer who can study spells, craft artifacts and eventually graduate from one of four academies. In time, your Necromancer can attract their own apprentice and assemble an undead army of minions to rule the lands. Your Necromancer can venture into dungeons where they will encounter wonders and dangerous creatures — and perhaps meet new companions. In the end, your Necromancer might be able to return to their academy and become Headmaster — or even seize the foulest of thrones as the Necromancer King. Each player moves their miniature Necromancer around the game board to gather resources, spells and artifacts, enter dungeons, battle cities and fight rival Necromancers. Throughout the game, Necromancers can increase their combat and movement abilities as they amass their armies. A Necromancer’s minions can also be left behind to protect conquered cities and dungeons. In addition to the game’s territorial component, the players compete in collecting spells, artifacts and minions affiliated with the four academies. Enough elements of the same color can make you Headmaster of an academy. The game has a varying starting set-up, so no two games are ever the same.”

Funding Status: Funded; currently at 347% with 8 days to go.

Summary: “Players vye to complete as many of their individual goals as possible to gain Victory Points and then successfully reach safety before time runs out. While this is happening, they must also survive various dangerous dinosaurs that are out to get them. Players take on the roles of 1 of 8 unique characters, ranging from the ruthless Hunter and the friendly Ranger to the no-good Saboteur. Each character has a specific set of goals that no other Player knows. The Player who gets the most Victory Points by completing goals and escapes the island wins. Players take turns performing actions, engaging in unique encounters, and interacting with the park’s locations. Meanwhile, dinosaurs reveal themselves, hunt, attack, and defend themselves against the Players and other dinosaurs. The game takes place over 16 Turns which make up 48 in-game hours. Once the 16th Turn is over, so is the game, and any character who has not reached safety is dead. To make matters even worse, at the 24-hour mark, the volcano begins to spew lava onto the island, destroying roads, jungle, and buildings, and panicking even the friendliest of dinosaurs. Get your friends together and hold onto your butts, because on Isla Sauria, if you’re lucky, you might just survive.”

Summary: “A solo and cooperative card game inspired by tower defense video games. Waves of monsters will siege your castle all the while a sea of minions will pillage all your resources. Choose a legendary hero to rally the troops, defend the walls, and defeat the Outsider. Now go and fight, for the alliance. The core gameplay of Skytear Horde is the combat between waves of monsters and your hero and troops defending the castle. If you played card battlers like Heartstone or KeyForge, you will find yourself at home. You lose if your castle is destroyed or if your deck runs out of cards. On the other hand, to win it will not be enough to “just survive” the horde. You will have to find the resources to leave the castle and tear down the gates that are spawning the waves of monsters.”

Summary: “Inspired by real life synchronized swimming, Sync or Swim focuses on teamwork, collaboration, and communication. Each round, teammates plan the perfect routine while taking direction from the team captain. The clock starts and players start trading, placing, and diving for cards to get their performance just right. As your team progresses through each round, the routines become more challenging and throw all sorts of twists your way. At the end of each round, the free app judges your performance based on your timing and accuracy — you and your friends will discover creative tactics for better strategies and scores each time you play.

Summary: “Viscounts of the West Kingdom is set at a time when the King’s reign began to decline, circa 980 AD. Choosing peace over prosperity, our once strong King began offering our enemies gold and land to lay down their axes. But peace is a tenuous affair. As poverty spread, many people lost faith in his ability to lead and sought independence from the crown. Since finding favour in his courts, our future has also become uncertain. As viscounts, we must be wise and decisive. Loyalty is to be upheld, but gaining favour among the people must be our priority, should there be a sudden shift in power. Points are gained by constructing buildings, writing manuscripts, working in the castle, and acquiring deeds for new land. Players begin with a handful of townsfolk, but should quickly seek out more suitable talents to advance their endeavours. Each turn they will be travelling around the kingdom, looking to increase their influence among the various areas of society. The game ends once the Kingdom reaches poverty or prosperity – or potentially both!

In Gates of Gold, people from near and far have come to see the splendor of our great city. While most are traders and labourers, eager to make a home for themselves, others seem to have more devious intentions. Can we really trust those who once attacked our walls? Do they truly desire peace? The King has sent his orders, but we will decide who may stay and who must go. This expansion introduces the new King’s Order and Outsider Cards, new Building Bonus Cards, Manuscript Boards, and plenty of new Townsfolk, Heroes and Manuscripts Tiles.

In Keeper of Keys, tensions continue to rise in the King’s court. Some choose to plot in secret, forging alliances with like-minded officials. Others seek out treasures and secrets hidden deep within the castle walls. Will you remain loyal to the very end, or take your future into your own hands? This expansion introduces 3 public Buildings for players to compete over, thick Player Boards, and the new Chest Tiles. Along with more Townsfolk, Heroes and Manuscripts Tiles, there are also 3 replacement starting Townsfolk for each player. These grant ways to gain the new Chest Tiles or to recruit more Heroes.”

Summary: “You are the leader of a Mayan city. You have promised your people to win the favors of the Gods, and their fate is in your hands. Send your warlords to capture enemies, increase your might with every season of the sacred calendar, and sacrifice your prisoners to the Mayan gods to ensure your dominance. Your warlords will become more and more formidable, your city more and more glorious, but your opponents do the same, so enlisting the help of the mythological creatures and heroes will be necessary to try to restore with blood, the energy of your gods. In this game, your goal is to capture prisoners, and the Yucatan peninsula is your playground. Prepare for four seasons of fierce fighting. At the end of each season, you will ritually sacrifice captured enemies to gain reputation, but be careful because the gods are demanding: each of your sacrifices must be more glorious than the last. Each decision matters in the subtle balance required to make your city the glorious and eternal sanctuary of the mighty Mayan gods.”