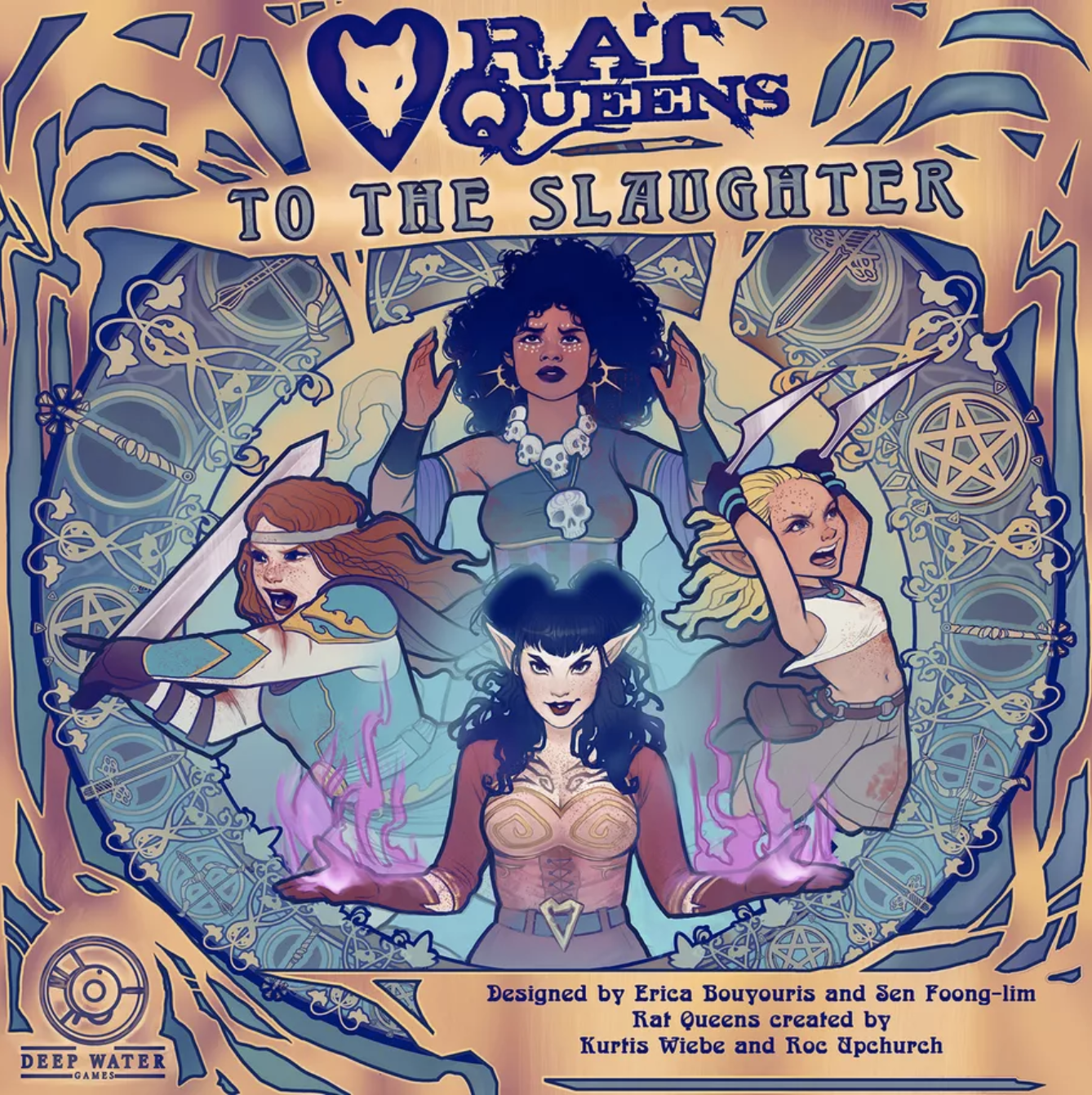 Summary: “An immersive sim adventure board game set in the wild frontier. Brawl, loot, burn, and trade as one of four deadly strangers in this open-world sandbox. As you wake each day, you must form a plan and play on your character’s unique strengths, weaknesses, and personality to outperform the competition. Whether you live the life of a powerful merchant, an agile gunslinger, a malicious arsonist, or a stealthy thief, there is a unique way for you to come out on top. To win, you must gain Notoriety in town. You accomplish this by completing tasks, rolling dice, managing cards, and deciding how to spend your action points. Eventually, you will build small-time enterprises into corporations operating deep in the frontier. Along the way, be on the lookout for enemies and rival players who are aiming to fight you, burn your cabins down, and steal your hard-earned wealth!”

Summary: “Players can ‘evolve’ their finch discs by changing their characteristics, such as beak size, body size, or body markings. The players then flick their finches across the playmat as close as possible to the Darwin figure, who awards them seeds based on the characteristics he’s currently studying. After sketching a finch, Charlie moves to the next island in the Galapagos, with the finches giving chase. The player with the most seeds when Darwin’s sketchbook is filled wins the game.”

Funding Status: Currently at 9% with 16 days to go.

Summary: “An immersive combat exploration game fset in mythological ancient Persia, challenging 4 Heroes in chronicled adventures against the Angra Mainyu, the source of all evil. The game system is an RPG / Dungeon-Crawl. There are six missions, and after each event, each player can improve their abilities and get more gifts. At the end of each chronicle, one of two events will take place depending on which side wins the game. Each game involves an action-packed fight where two sides face off. One of the players assumes the role of the dark side and controls the army of Ahriman. The remaining players take control of the Heroes, who must work together as a team to stop the darkness. Each side takes turns, pitting their strategies against each other in order to achieve their objectives.”

Summary: “To win, be the first player to get up to 10 on your hype meter, flip it over, and then go back down to 1. You gotta GET HYPED by making impressive tags and creating mischief on the playground… but then you need to have enough self-control to SIMMER DOWN and go back to class. Hype Tag features the unique interaction of two different decks of cards. The HYPE deck has the strategic depth of a trading card game while the TAG deck has the simple fun of a classic card game.”

Summary: “I’m Right You’re Wrong is any petty argument in the form of a card battle. Take turns dishing out petty insults, traps or take the highroad. Then deal with the consequences. Win by robbing your opponents of all their arguments. If you run out of comebacks/cards, you lose. Because, having the last word is sweeter than being right. The twist– there are a lot of unhelpful cards. Choosing the least worst option is all part of winning.”

Project: Méthodologie: The Murder on the Links

Summary: “The game of Méthodologie is played in two distinct phases: the Investigation Phase and the Accusation Phase. In the Investigation Phase, the players reveal cards from their hands, then interrogate each other in order to eliminate leads. This sequence continues until each player has only one character, one location, and one object left in hand. In the Accusation Phase, the players will place target tokens to make accusations about the remaining cards in each other’s hands. Any cards not correctly identified by majority accusation will be scored when the game ends.”

Project: Rat Queens: To the Slaughter

Summary: “Forge Friendships and find your family, as you take on the role of the rat queens. Choose from 4 (5 with Braga Expansion) Rat Queens, each with asymmetical and unique playstyles, in order to save Palisade from total destruction. Power up your queen with new abilities and friendship as you take on hordes of monsters. Each queen comes packed with upgraded abilities you’ll have to spend gold to learn. Customize your queen differently each game to fit what the party needs. Players will spend the first half of the game defeating monsters to earn rewards they’ll use to upgrade their ability deck and stats in order to save Palisade from a devastating foe and darkness looming in the background. Manage your friendships and upgrade your abilities to ensure your beloved home isn’t doomed. Combat is a simplified version of RPG combat with easy to learn dice checks for attacks and abilities.”

Summary: “A collaborative, discussion-based game. The solutions in this game are based on Project Drawdown: a framework of climate solutions, developed by a collaboration of over 200 scientists. Project Drawdown shows a path forward to how we can beat climate change by the year 2050. They have ranked 76 climate solutions based on how much impact they can realistically have between 2020-2050, based on technology trends, adoption trends, economics, carbon lifecycle analysis, and more.”

Summary: “A cooperative dungeon crawling and storytelling game that ties together physical boards, cards, and standees with a smartphone app using scan-and-play technology. Each scenario typically involves a combination of exploration, puzzle solving, storytelling, and combat in a classic sword and sorcery setting. Games of Taelmoor begin with players selecting an archetypal class (i.e wizard or rogue), and forming a party by joining the host’s game with their smartphone or mobile device. Players then take turns exploring and interacting with the game world. New rooms are laid out tile by tile as they are explored, and each may include unique elements like NPCs to talk to, puzzles to solve, or combat. The story is relayed simultaneously to all players via the app, though players are encouraged to read new passages aloud as they are discovered. Combat features simplified deck construction elements. Each class has unique strengths and weaknesses, and can build a custom combat deck as they level up throughout a scenario. Strategy between players is emphasized as many attacks become more powerful when combined with others. Attacks are played by scanning the physical card and then discarding.”

Summary: “A card game in which players are placing city cards onto the table and stacking bottle caps (which represent the company’s influence) onto the played cities on the table. At the start of a player’s turn, if their bottle cap is on a higher stack than the other players on a city card, that player collects that city; if not, they continue to try to gain dominance on city cards where they can. Each city comes in two types: day and night. Day city cards are played face-up on the table for all to see. Night city cards are played face down and only the player who played the card and whoever it is in front of can see it. At the end of the game, players earn points for majority control in a city and sets of cities collected. In the advanced version of the game, cities also have powers that are earned when a city is collected. A player continues to maintain their power until another player has collected the associated city, at which the power is then transferred.”

Summary: “Warcaster: The Thousand Worlds introduces a host of new models to each of the four Factions of Warcaster, along with The Thousand Worlds source-book and extras. Warcaster: Neo-Mechanika is a high-speed hobby miniatures game for two players who each take on the role of a powerful Warcaster in command of a formidable battle force. Players assemble and customize a force of 20–30 models and fight a scenario-driven battle using dice and cards to control their mighty units and to cast epic cyphers. The game is played using an alternating-activation turn sequence with a round tracker that governs scoring opportunities and the duration of ongoing effects. Players take turns activating units one at a time and using their rack of cyphers, reality-warping spells that can be used to enhance their troops and warjacks or to devastate their opponent’s forces. While the Warcaster is not physically present on the battlefield, their presence is always felt. A Warcaster coordinates and supports their forces from a sophisticated command and control center called a rack, located aboard a massive battle carrier that transports the Warcaster’s troops and warjacks. In the game, the rack is represented by a deck of cards—the spell-like cyphers—that players customize prior to the game based on the powers and abilities they wish to wield as a Warcaster.”